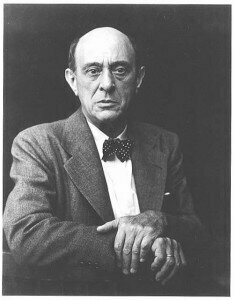 Arnold Schoenberg, composer of the Five Pieces for Orchestra © www.allmusic.com

There is considerable debate across the entire scholarly and social spectrum as to what composer was most influential in the field of Western Classical music. It may, or may not surprise you to learn that Glenn Gould considered Arnold Schoenberg the most primordial and elemental force! The music critic Norman Lebrecht—renowned for his dogmatic dislike of everything central-European—formulated the following assessment: “It is a measure of the immensity of the man’s [Schoenberg] achievement that, 50 years after his death, he can still empty any hall on earth.” The audience did not run away from the premier of Schoenberg’s Five Pieces for Orchestra in London’s Queen’s Hall at a Promenade Concert on 3 September 1912, but it would be a stretch to suggest that they enjoyed it. A critic wrote, “It was like a poem in Tibetan; not one single soul could possibly have understood it at first hearing… At the conclusion, half the audience hissed. That seems a too-decisive judgment, for after all, they may turn out to be wrong; the other half applauded more vehemently than the case warranted, for it could hardly have been from understanding.”

Schoenberg had written to Richard Strauss shortly before completing Op. 16, “They are short orchestra pieces (between one and three minutes long), not cyclically related. I have finished three of them, a fourth will take at most a few days, and perhaps two or three more will be born later… I am expecting colossal things of them, sound and mood especially. That is all they are about: absolutely not symphonic—precisely the opposite—no architecture, no structure. Merely a bright, uninterrupted interchange of colors, rhythms and moods.” And maybe that is precisely what Glenn Gould was alluding to. In his Five Pieces for Orchestra Schoenberg accorded music a level of expressive freedom that it would never again relinquish. Schoenberg once famously quipped, “Somebody had to be Schoenberg, and the lot fell on me.”