“A glamorous pianist in an unglamorous role as an accompanist!” 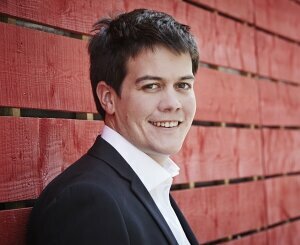 That was my first consuming thought when James Baillieu garnered a vast amount of attention in 2013, at the BBC Cardiff Singer of the World in Wales as the accompanist for Ben Johnson, an outstanding tenor. In other words, James “stole the show” as the star pianist whom singers and instrumentalists wish to share the stage with.

I met James again at the 2018 Verbier Festival, where he accompanied the Academy singers for all the master classes conducted by Susannah Waters (opera singer/director) and Thomas Quasthoff. He received profuse compliments from both artists and audience alike. Furthermore, he innovated a lieder programme themed “A Life in Songs”, featuring a wide selection of songs by Schubert, Liszt, Strauss, Poulenc, Ibert, Ravel, Berlioz, Rachmaninoff, Elgar and Vaughn Williams depicting different facets of life and love. As the accompanist, he demonstrated the same sensitivity, fluidity, and empathy as I remembered from five years ago, albeit with increased assertiveness.

To complement The Daily Telegraph’s portrayal of James – “in a class of his own” – I would herald him as “a rare talent in his own right”. Not only is he a remarkable pianist, he has an unassuming yet engaging manner, which reflects his commitment to fully support his collaborator’s interpretation, and at the same time, justifiably serve the composer, the music and the text. His composure is poised and gracious, his tones warm as cashmere, and his expertise admirable – qualities that place him in the same elite “bracket” as Gerald Moore and Graham Johnson, leading accompanists of our time.

James was born in South Africa, and was educated at the University of Cape Town and the Royal Academy of Music in London. He was a prize winner of competitions such as the Wigmore Hall/Independent International Opera Song Competition and Das Lied International Song Competition, recipient of several prestigious awards, and was shortlisted for the Royal Philharmonic Society Outstanding Young Artist Award.

His concert career has taken him all over Europe, North America and Asia, partnering with an extensive list of prominent singers and instrumentalists including Benjamin Appl, Jamie Barton, Ian Bostridge, Dame Kiri Te Kanawa, Mark Padmore, amongst many.

One of James’ most notable projects was his own 11-concert series at Wigmore Hall: “Introducing James Baillieu”, which was honoured for his outstanding contribution to the performance of chamber music and song in the UK during 2016.

Besides pursuing a busy performing career, he is a Professor at the Royal Academy of Music, holds coaching positions in institutions such as the Royal Opera House, the Royal Northern College of Music, and heads the Song Programme at the Verbier Festival Academy.

At the Verbier Festival, I had a chance to interview James. He came across as easy-going, soft-spoken and mild-mannered. The way he defines himself is “a pianist specializing in song”. According to him, the essential habits one requires to achieve results in a career as his, are “attentiveness, awareness, and good listening skills”. When asked to describe a memorable experience in his learning process, he alluded to the time when he improvised on the piano to silent movies – an effective way to respond viscerally to storytelling. Here is his own story:

Firstly, James had an eye-hand coordination problem as a child, with difficulties crossing his hands. Piano lessons were initiated as a therapy to help “adjust his brain” and return him to normalcy. After years of hard work at the piano, not only was his physical condition completely cured, he became totally obsessed with music. As a result, he chose to pursue studies in music at university, later won a number of competitions and toured as a solo pianist. Soon after, he discovered that a soloist’s lifestyle did not suit him all that well, so instead, he continued graduate studies in accompaniment and chamber music in London, and subsequently established his career there. 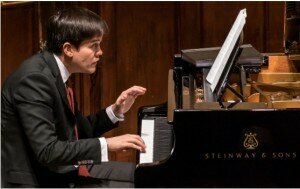 Secondly, I was curious what sort of background he came from, that accounted for his understated demeanor and amiable personality. Unsurprisingly, he came from a big family, with cousins also living with his immediate family. Therefore, from childhood, they all learned how to adapt to a wide array of personalities. 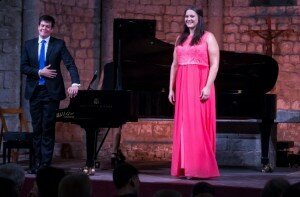 James reconciled the fact that in his profession, being versatile, diplomatic and calm are vital traits needed to cope with different musicians, particularly singers. Their focus is so intensely on their bodies (their instruments) that they sometimes are unaware of their own voice production and musical interpretation. Consequently, they can be overly sensitive to harsh criticisms. He clearly emphasized the importance to be considerate and accommodating in such situations.

Thirdly, being an excellent sight reader, having the ability to learn repertoire quickly, and most of all, enjoying rehearsals with other musicians (and sharing the limelight on stage) are all attributes he is gifted with, offering him immense advantages in his special niche.

In short, James seems to be totally in his element! Being a self-assured individual, actively engaged in a fulfilling career, facilitating greatness in tandem with others, definitely constitute “success”. However, he did confess, with a twinkle in his eye, that if he were not a pianist, he would have become an airplane pilot!

The interview left me with tremendous respect (and envy) for James’ contentment in life, not to mention his musicianship and accomplishments. If I were a budding music student today, I would request to study with him, and become a “glamorous pianist specializing in song”.