In Tune Society
In Awe of the Verbier Festival Orchestras
by Ellen Wong Tso March 4th, 2018

“Listen to Awesomeness” is a contemporary jargon used to market products related to focused listening – from audiobooks to earphones to DJs streaming music online. Even though the expression rarely exists in the classical music arena, it aptly reflects my tribute to the Verbier Festival Orchestras – their awesomeness being the subject of this article.

I have never learnt another musical instrument besides the piano, nor was I encouraged to do so. Growing up, I was led to believe that musicians who perform as soloists were allocated a higher social status than ensemble players. The analogy to justify that notion was: “Operating one’s own business is more prestigious than working for a large corporation”. As a gullible youth, I bought into the whole doctrine, and committed to practise piano relentlessly, so as to perform solo on stage (self-reliant and self-sufficient), superior to instrumentalists who depend on accompanists to complete their performances. Alas, along with such solitary fame and glory came transparency and responsibility. Perpetually fearful that the audience would scrutinize every note, assess every phrase, and worst of all, ruthlessly judge every mishap, I missed out on the rewards of big picture music making, hence endured many years of self-inflicted pressure, anxiety and forlornness.

Fortunately at university, my brilliant piano professor came up with an assignment that absolutely changed the way I conceptualized music. She made me orchestrate the piano repertoire I was studying, for the purpose of broadening my horizons in sound, texture and scope. In other words, I was being taught to think bigger than myself and my piano. For a whole year, I attended orchestral rehearsals, and learnt to integrate orchestral characteristics into my musical interpretations. I became my own conductor, and transformed the 88 keys into a personal orchestra. I was enamoured with massive orchestral works (Brahms and Mahler), began to hero-worship charismatic conductors (Zubin Mehta and Herbert von Karajan), and yearned to be part of a greater whole on stage.

Imagine this: If I were born marvellously talented and wildly ambitious, with lofty plans of being accepted into venerable orchestras such as the Royal Concertgebouw or Berlin Philharmonic, how would I strategically structure my education so I could be good enough to warrant an audition? Clearly, the Verbier Music Festival orchestral programme would be my solution, as it is one of the world’s best grooming grounds for serious orchestral musicians. Ideally, I should attend the festival every summer as a child. After being totally inspired, I would strive to be admitted into their Verbier Festival Junior Orchestra (VFJO) at age 15. Then I would work my way up the ranks to join the Verbier Festival Orchestra (VFO) after age 18. If I indeed have the capability to pursue such a profession, I would try my utmost thereafter to be a member of the Verbier Festival Chamber Orchestra (VFCO), one of the best orchestras in the world. I would be exposed to leading conductors and soloists of international acclaim. I would gain superb professional experience, collaborate with the best musicians, and acquire world-wide contacts. I could achieve my lifelong goal with the Verbier training. 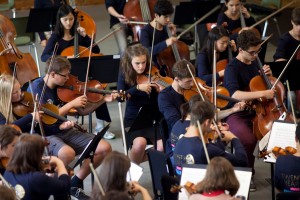 The Verbier Music Festival is home to 3 orchestras. Each of them comprises exceptionally gifted instrumentalists recruited from all corners of the earth. Auditions for the VFO (ages 18 to 28) and the VFJO (ages 15 to 17) are in person or by video in certain cases. In 2018, auditions are held in Berlin, Cologne, Geneva, Zurich, Madrid, Paris, Moscow, and New York. For VFO, there were 918 applicants in 2017, 47 were accepted (5%); 1149 applicants in 2018, anticipate 36 to be accepted (3%). Existing members can stay for 3 years, which means, 70% of them are re-invited. For VFJO, there were 179 applicants in 2017, 36 were accepted (20%), 21 re-invited; 204 applicants in 2018, anticipate 20% to be accepted, 1/3 re-invited. The VFCO auditions are held internally for VFO alumni exclusively. All the above statistics validate the fact that competition is indeed daunting. High expectations abound, as inevitably, there is room for only the “crème de la crème”!

During the festival, Verbier Village buzzes with excitement – about 100 VFO musicians congregate for 5 weeks, and 60 VFJO musicians for 3 weeks. They undergo intense rehearsals daily, coached by members of top orchestras, trained and directed by world-renowned conductors, in preparation for symphonic concert performances. They attend celebrity concerts in the evenings and socialize with peers in jam sessions or chamber music gatherings. The level of productivity, what these young people accomplish in such a short time span, is astounding. The repertoire they cover and the standard they uphold, are also mind-boggling. I was told their energy level is so palpitating that the resort lights up when they arrive, and mellows down after they leave.

Sunrise upon the Mount Fort 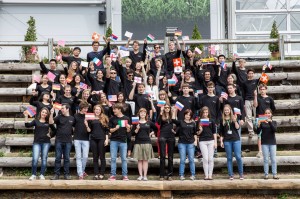 The VFO was initiated in 2000 under the musical direction of James Levine, and coached by principal chairs of the New York Metropolitan Orchestra. The founder Martin Engstroem’s vision was to host annual summer workshops in these scenic mountains, to espouse educational values and inspire young musicians through their interaction with world-class artists, creating mutual benefits for both the old and young, seasoned and aspiring alike. In 2009, Charles Dutoit took over from James Levine as musical director. Through the years, he regularly welcomed appearances from guest conductors – all “giants” in the industry. For the 2018 festival, superstar conductors Christoph Eschenbach, Valery Gergiev, Ivan Fischer, Zubin Mehta and Gianandrea Noseda are scheduled to conduct in altogether 7 concerts. Also beginning in 2018, Valery Gergiev, amidst his very busy schedule, assumes the position as VFO’s musical director.

The VFCO, resident chamber orchestra of the Verbier Music Festival, was created in 2005, with its 60 members being talented VFO alumni, also affiliates of prestigious international orchestras – the London Symphony Orchestra, New York Philharmonic, Vienna Philharmonic and many more. Gábor Takács-Nagy was appointed as musical director in 2007 and remains in that position today. Every year, they perform at least 6 concerts at the festival, focus on works in the chamber orchestra repertoire. The following much revered maestros are committed to conduct in 2018 – Gábor Takács-Nagy, Marc Minkowski, András Schiff, Pinchas Zukerman, Pablo Heras-Casado. Annually, the VFCO holds their residency during the festival week at Schloss Elmau, Germany, and tours extensively all over the world. Their 2018 itinerary encompasses concert tours to Hong Kong and several other cities in China (March), then Dubai followed by a cruise to Cyprus (April).

Last but not least, the VFJO was launched in 2013 by conductor Daniel Harding. It takes the form of a summer camp, where teenage members are encouraged to explore Verbier’s beautiful surroundings, engage in fun activities besides rehearsing, and practise the mantra: live, work, play. It is indeed a privilege for these aspiring musicians to work and play alongside talented instrumentalists from around the world, as well as experience the expert direction of Daniel Harding and esteemed guest conductors. They are performing 3 concerts in 2018 conducted by Alain Altinoglu and Stanislav Kochanovsky.