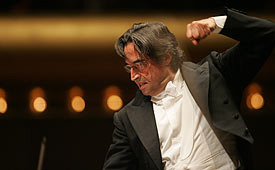 ‘I am the ultimate outsider,’ conductor Riccardo Muti told Norman Lebrecht in a BBC interview. After hearing their conversation, I had an image of Muti, wearing shiny armor, riding on a horse, and conquering the world with the sword of music. Muti also reminds me of several Italians: like Marco Polo, he travels to explore; like Leonardo da Vinci, he embraces all knowledge; like Romeo, he loves passionately. Riccardo Muti and his troop of musicians from the Chicago Symphony Orchestra will soon be in Hong Kong to leave their mark at the 41st Hong Kong Arts Festival. Here he talks about his vision for CSO, his compatriot Giuseppe Verdi, his family background and his advice for young conductors.

JL: In 2010, you became the 10th music director of the Chicago Symphony Orchestra. What is your vision for CSO while inheriting its great tradition?

RM: In art and in everything, we all strive for perfection knowing precisely that perfection doesn’t exist. But, certainly, my vision and hope for the Chicago Symphony Orchestra is to expand the repertoire, and to elevate the technical and musical qualities of the orchestra, which are already very high. From the first moment I joined the CSO, I wanted to also make it possible for many people, for everyone in Chicago, to become familiar with the Orchestra. We have worked very hard to reduce the distance and to overcome these difficulties, but there are still areas of the city that, for several reasons, are still far away from enjoying and being enriched by our music. The concert experience should not be a social event, but an occasion for the musicians and public to be together, to have a singular experience that brings everyone together without barriers.

RM: With the Vienna Philharmonic, you have the Viennese tradition concerning certain instruments such as the oboe and horn. The Viennese oboe has a completely different sound than any oboe in the world. The Viennese horn has a different sound than the standard French horn. The way that the Vienna strings use the bow, the vibrato that they have even when they play staccato, is a unique sound that depends on the way they use the instrument. But the Vienna Philharmonic today when they play for me, for example, they get a sound — and I am so close to those musicians, because I have been conducting them for more than forty consecutive years, a record that no other conductor has — immediately. I am able to get the musicians to create the sound that I want. In the hands of other conductors, the orchestra can sound different. The Vienna Philharmonic can produce their sound in different ways.

When I was in Europe or even when I was music director in Philadelphia, we always heard — I was not familiar myself — about the brass of the Chicago Symphony. It was a compliment to the brass section, but it was not a compliment for the rest of the orchestra, that everybody was talking about the brass. Today, we can speak very highly of the brass, of the woodwinds, of the strings, of the percussion: the entire orchestra.

JL: You are considered as one of the greatest conductors of Verdi’s music. How do you see Verdi, as a man and as a musician?

RM: Verdi spoke to the man about the man. He didn’t speak about superheroes. Even when he put music to stories that come from legends, he still made everything very human. We all recognize ourselves in the characters that Verdi put on stage. Verdi, as a composer, as a musician, had such talent in interpreting the soul of the Italian people — all the feelings, love, hate, jealousy, sufferings of all kinds. That he was able to bring these elements to a universal sphere — that is the reason his music is loved and accepted by all the people in the world. 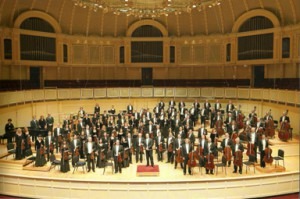 JL: If you had your life again, would you choose to be a composer or a conductor?

RM: To answer whether or not I would choose to be a composer or a conductor is difficult since it was never my intention to be a musician. Although my father was a medical doctor, he believed that music was absolutely essential in the general education of a young boy or girl. Even if destined for another profession, my father believed that music was important to study anyway. He wanted for me and my four brothers to become professionals, like doctors, lawyers, engineers, or architects. At that time in the south of Italy to become a professional musician was like flying to the moon, something unusual. I became a conductor through unexpected circumstances so I cannot say if I had my life again if I would choose to be a composer or a conductor.

JL: There are a number of young conductors in the world. Do you have any advice for them?

RM: Every conductor should know compositional technique very well. Unfortunately, it is very rare now. I studied composition for ten years. Young conductors today are generally more interested in the external, the outward show that people make on the podium, than they are in spending time deeply studying harmony, counterpoint, orchestration etc. It is too easy to go from playing an instrument to starting to wave the arms. As Toscanini said, “to beat time, every donkey can do. But to make music, beating time is very difficult.”

I don’t have advice for the young conductors but, for me, the education of classical studies, literature, philosophy, Latin, Greek, was essential preparation. It is extremely important to be someone who not only reads the notes very well but also knows about culture, so as to be able to enter into the mystery that lies behind the notes.

Maestro Riccardo Muti has cancelled the Asian Tour due to illness. He will be replaced by Maestro Lorin Maazel.