“La vie antérieure” (A former life) originates in Baudelaire’s Les Fleurs du Mal first published in 1857. The collection was reissued in 1861 and published for the final time in 1868 after Baudelaire died. Baudelaire is generally considered to be the speaker in this poem, and the world he describes is his own imagination. Mingling the real and imagined, potent symbolism relates to the speaker’s creative process and mental being. 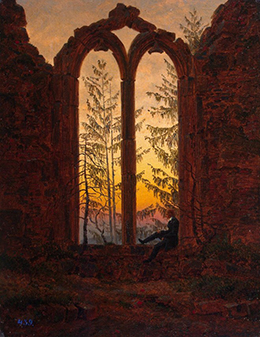 Ruins of the Oybin (Dreamer) by Caspar David Friedrich

For a long time I dwelt under porticoed halls
which ocean sunshine tinged with light of many flames
and whose majestic pillars standing straight and tall
made them appear at dusk like vast palatial basalt caves.

The sea-swells, as they rolled images of the skies,
combined through a solemn and mystical force
their overpowering music’s sonorous chords
with the colors of sunset reflected in my eyes.
There, there is where I lived in most delicious calm,
with the blue of the sky, the splendor, the waves…
and the elegant bare-bodied sweet-scented slaves

who would refresh my heated brow with fronds of palm,
and whose only duty was to intensify
the secret malaise that made me ache and sigh. 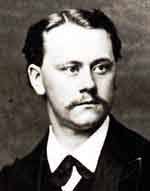 Henri Duparc, along with Gabriel Fauré did more to immortalize the French mélodie than any other French composer. Both men possessed a unique gift for writing beautiful melodies, and Duparc’s real genius emerges in his seventeen songs. Duparc retreated from the musical world in the prime of his life, which explains the very small number of compositions. Duparc composed La vie antérieure in 1884, and it would be his last completed song, as a nervous disease prevented him from composing after 1885. The original version is set for voice and orchestra, with an arrangement for voice and piano fashioned thereafter. Duparc employs a rather large vocal range, and wave-like arpeggios draw attention to the surging waves rolling along the reflections of the skies. A critic wrote, “This song displays Duparc’s chief merit, that he is not satisfied to make words sing, but translates the poet’s very thought and feelings… He confided to it his most intimate and most profound inspirations.” 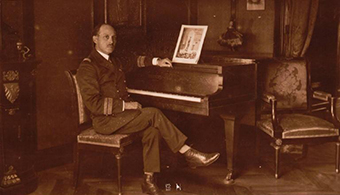 Jean Émile Paul Cras (1879-1932) was born in Brest on the Breton coast into an esteemed Naval and medical family. By six, he began composing short piano pieces, songs and vocal duets. Following in the family tradition, however, he enrolled at the Naval Academy in 1896 but alongside basic military training he taught himself music theory, orchestrations, counterpoint and compositions. At the age of 20 he decided to study with Henri Duparc, and within days of their first meeting Duparc declared him “one of the most gifted musicians he had ever met.” They became lifelong friends, and Duparc referred to his Protégé as “the son of my soul.” During rare breaks from Navy duty, Duparc guiding Cras meticulously through the compositional processes of Bach, Beethoven and his own mentor, César Franck. Cras explained in a 1924 interview, “Despite the hazards to which I was subjected by my naval career I never ceased to compose, faithful to the teachings of my professor, but above all forcing myself to remain myself, for whatever that may be worth… It is difficult for me to pinpoint my artistic inclinations. I am not, nor wish to be associated with any one school of thought.”

Aside from his literary influences, Baudelaire held great fascination with composers because his art so closely resembled music. The consummate art, which went to the making of his verse, was that of a slow but fastidious worker. His subtle and disciplined technique, his fondness for plastic descriptions and fixed poetic forms bathed in polished exquisiteness of diction, greatly appealed to musicians. Structural forms and profuse imagery aside, Baudelaire’s themes are unique and terrible. “For into his poetry,” a critic wrote, “he poured all the dark pessimism of his own soul, all the bitterness and agony of his own despair.” 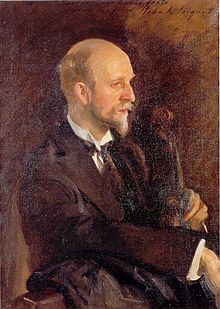 Philippe Gaubert (1879-1941) clearly understood the concepts of agony and despair, as he was mobilized into the French Army at the outbreak of World War I. He fought at the Battle of Verdun and earned the “Croix de Guerre.” His settings of Baudelaire express his personality in a spontaneous, and natural fashion. Unaffected, without fuss or intellectual coquetry, his melodies nevertheless feature a rich and refined musical language. The same might be said of Charles Martin Loeffler’s (1861-1935) setting, who stylistically remained close to his contemporaries Franck, Chausson and Debussy.