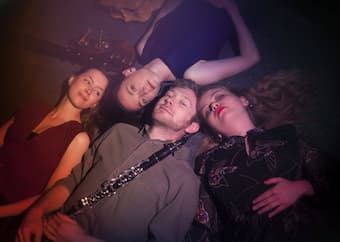 I should probably begin this Artist of the Month article with a little disclaimer: this month’s offering is something slightly different, as, erm, I’m in the group being featured. Nevertheless, I will aim to keep my own trumpet-blowing to a minimum.

The Hermes Experiment is a young British ensemble, made up of soprano, harp, clarinet, and double bass – hardly your standard quartet offering. The group consists of four instrumentalists and a co-director, and we are Héloïse Werner (soprano and co-director), Anne Denholm (harp), Oliver Pashley (clarinet), Marianne Schofield (bass), and Hanna Grzeskiewicz (co-director).

Since our formation in 2013, we’ve commissioned over 60 composers to write works for our ensemble, in addition to arranging pre-existing pieces and venturing into live improvisation. To date we have collaborated with a wide range of artists, including photographers, poets, improvisers, animators, and dancers, and travelled around Europe bringing our weird and wonderful combination of instruments to audiences in France, Estonia, Russia and The Netherlands (as well as in and around the UK, of course). Most recently we won a Royal Philharmonic Society Award, picking up their Young Artist prize, which was a huge honour to be recognised for the work we’ve done over the last eight years. 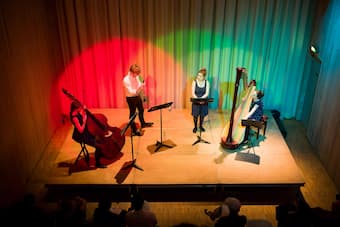 We all met while studying at university, but it wasn’t until after graduating and moving to London that Hermes was born. Starting out with a repertoire of exactly zero pieces was quite a challenge to begin with, but it’s been a joy to see the body of work increase steadily over the years.

We’re delighted to have commissioned pieces from composers such as Errollyn Wallen, Philip Venables, Ayanna Witter-Johnson, and Giles Swayne, but we also work regularly with student composers, having done workshops at UK conservatoires including Trinity Laban, the Royal Academy of Music, and the Royal College of Music. Commissioning and creating new music is one of the main reasons we started the group and it continues to be at the forefront of what we do. 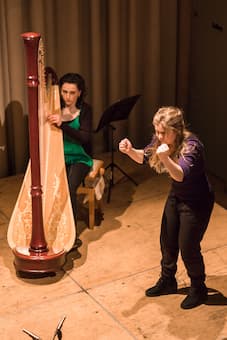 When we commission a composer, we often leave the brief open-ended to leave as much space as possible for the composer to do their thing. Workshops with the composer form a central part of our collaborative process, and our rehearsals are often spent trying new things, adjusting existing things, and having conversations with the composer to try and bring their ideas to life.

As for the arrangements: these are done by us, the members of the ensemble. We’ve arranged music ranging from the 17th century (Barbara Strozzi) to pieces written just three years ago (Olivia Chaney’s Roman Holiday). Some of our arrangements are quite ‘standard’ in nature, more akin to transcriptions, while others take slightly more artistic licence. As when we brief our composers, we deliberately leave things open-ended to try and create as much variety as possible: for example, on SONG, our most recent album (shameless plug time), Marianne’s arrangement of two beautiful songs by Lili Boulanger (Reflets and Attente) treat the ensemble like an expanded piano, straying not too far from the original accompaniment, while Heloïse’s interpretation of Barbara Strozzi’s Tradimento! features more traditional song-like sections interspersed with interludes of contemporary improvisation. 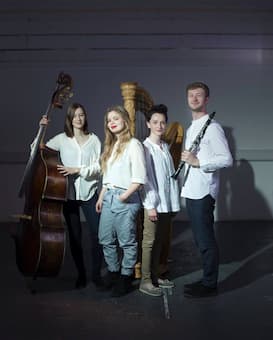 I find it a huge privilege and pleasure to be able to make music with some wonderful friends and colleagues. Moreover, playing chamber music with a singer is a relatively rare occurrence for a clarinettist, and so to do it on a regular basis is a real treat. As much as possible, we try to look beyond the simple ‘bass instrument plus chord instrument plus melody instrument plus singer’ that our lineup can easily fall into.

Traditionally, singers are seen at the forefront of an ensemble, with the others providing accompaniment. While this is sometimes inescapable, we try as much as possible to see Héloïse as an instrument equal to the rest of us. Avoiding this typical hierarchy brings more prominence to the instruments normally in the background, and lets us explore our unique combination of sounds in new and unexpected ways, particularly when improvising.

While our music is modern at times (well, most of the time), we want to show people that it is not inaccessible. Even within the world of classical music, ‘contemporary’ music can often get a bad rep as snooty, intellectual, complicated. We hope that presenting our music in the right way means that it doesn’t have to be dumbed down or over-explained – we’ve had pieces written for us that are vibrant, colourful, exciting, challenging, uncomfortable, and everything in between.

I believe that it doesn’t matter where or when your music comes from; if it’s played with passion and dedication then that’s ultimately what transmits out to your audience. So, while what we do might not be the most conventional, we are committed to sharing our love of music with whoever will listen, and we invite you to come along on our journey. And who knows, you may be surprised by what you find.