Blog
‘It’s not that weird – honest!’
The How and Why of The Hermes Experiment
by Oliver Pashley July 21st, 2014 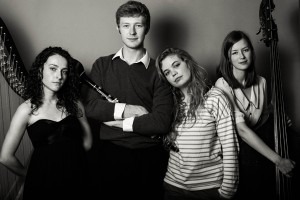 I’ve been met with expressions ranging from the enthusiastic ‘That’s so COOL!’, to a blank stare, similar to the stare you might direct at your screen in your 57th minute of Facebook news feed browsing.

We’d all had individual experience of contemporary music before deciding to form the group. We exist to promote contemporary music, combining new commissions with arrangements of well-known pieces in often unexpected venues. Our upcoming season features 19 composers, in venues all over London.

So, that’s all well and good, but then we come to the more important question: why are we doing this? Why did we think it would be a good idea to combine these weird instruments and make weird music in weird places?

The answer is in the question – many people see what we do as weird, whereas in reality it’s just a little different to what people expect. And we’re here to show people that weird and different are not the same thing, and whilst sometimes something can be weird, that’s not the primary characteristic of what we do. Don’t get me wrong, weird can be good too – but by automatically assuming something is going to be weird, a person has already distanced themselves from the experience, and made it about 15 times harder to connect with what’s going on.

Our 2014-15 season starts with a concert named Inspired by Bach. We’re taking preludes from The Well-Tempered Clavier and pairing them up with new commissions from a range of young composers. Our thinking here is to find a happy medium between old and new, showing that both can happily exist together, sharing the same space, rather than one being pushed to the sidelines while the other hogs the spotlight.

Our other themes for concerts throughout the year include Rhythm – featuring arrangements of Bernstein and Gershwin – and Soundscapes – exploring the wonderful world of textures a group of instruments like ours is capable of producing. 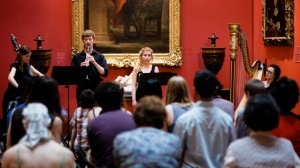 The biggest challenge with contemporary music is connecting with your audience, of getting them to enjoy the experience of this stuff. We talk during our concerts, which, by the way, is a great idea even for classical pieces! Why isolate your audience with written programme notes that often require an English degree to comprehend, when you can just talk to them instead? By talking to our audience we show them that we’re (relatively) normal people, and that there’s a connection between performer and audience that we want to explore.

We forget now that a lot of contemporary music was composed in the era when composers were writing ‘aggressively’, not intending their music to be understood or appreciated by many. That era is changing. As I said in a recent blog post on our website, composers want to write things for us, and we as performers want to perform them to you. We don’t want to merely ‘present’ a wildly complicated impenetrable work of high art and hope that you ‘get it’; we want to chat, and explain about the pieces we’re performing, of what they’re about, of what to listen for.

Thankfully, explaining some of these things can turn even the blankest of blank stares into, at the very least, a raised eyebrow, and then you know the seed of curiosity has been planted. If you’re unfamiliar with contemporary music, it can be as much an Experiment for you as it is for us; approaching the unfamiliar, especially when treading the minefield of contemporary classical music, can feel unnerving. But we’re here to show the world that contemporary music isn’t just something that can be appreciated, as one appreciates a painting from a distance. It’s an experience that involves you, the listener, as much as it involves us, and we live to make that connection and to perform with our audiences as much as to them.