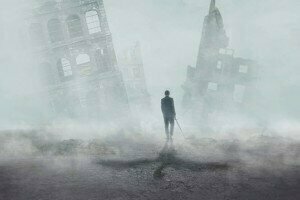 The new Lohengrin at the Royal Opera House, a co-production with Opera Vlaanderen, is musically a very fine production. What it lacks, however, is a unifying concept. Neither direction (David Alden), stage set (Paul Steinberg) nor costumes (Gideon Davey) came together to provide any discernibly consistent interpretation.

The first act is set in what looks like the backside of a ubiquitous brick-clad mid-rise condominium, the style of which are mushrooming in South London, and probably even in Ghent. Lohengrin’s entrance causes the two buildings to separate, but there is no sense of arrival, not even a swan. Just a fluttering of lights. The Knight of the Holy Grail walks timidly onto the set from between that narrow opening of the walls.

The wedding scene provides perhaps the most inspiration, though it is set in a sparse white washed hall dominated by a depiction of a traditional painting of Lohengrin (on a swan) from Neuschwanstein Castle. Friedrich von Telramund, Lohengrin’s opponent, literally storms through the wall in his failed effort to kill the hero. 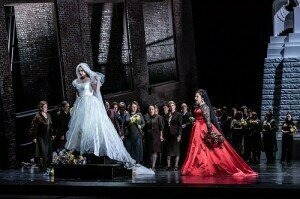 The Brabantine soldiers in the third act wear medieval looking uniforms and carry spears while wearing WWII stormtrooper helmets. The red, black and white flags, ok so it was a swan and not a swastika but could have gone either way, create a Leni Riefenstahl-like scene of no great logic.

Lohengrin is nothing like a hero of salvation. Rather, Klaus Florian Vogt portrays him as a vulnerable, innocently childish young man who looks mostly worried. He is more like a naïve fledgling Siegfried, a decidedly unimpressive hero. But Vogt remains a remarkable Wagnerian. He possesses a distinctive voice which is so airy and ephemeral, there is not a hint of pressure or pushing. And yet, the voice blades effortlessly through any orchestral swell and full chorus. He also uses his sweetly lyrical voice to great effect with frequent use of head voice, notably in his opening lines addressing the (non-existent) swan. His “In fernem Land” was also far more nuanced than most heldentenors would attempt. Though a slightly wooden and unimpassioned actor, his vocal control is impeccable. This is a singer who will have a long career. 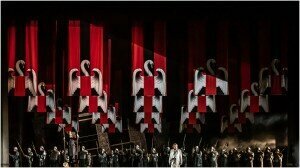 Vogt was well matched with Jennifer Davis as Elsa von Brabant. The Irish ingenue, who only emerged from the Jette Parker Young Artists Program last year, had replaced Kristine Opolais. While she was dramatically and vocally completely up to the part, displaying wonderful vocal agility and strength, casting her was certainly a gamble. She is very young to be singing such a role and the voice lacks some lushness, but she pulled it off with aplomb.

Christine Goerke looked and sounded like a veteran alongside Davis. A dramatic soprano with an astounding variety of modulation, she skilfully navigated the challenging part of Ortrud on the strength of her experience and large voice, managing an increasing vibrato in the upper ranges.

She completely outgunned her husband Telramund, portrayed by Thomas J. Meyer. While an adept actor with a solid stage presence, he was frequently overpowered or simply overshadowed by many other performers. 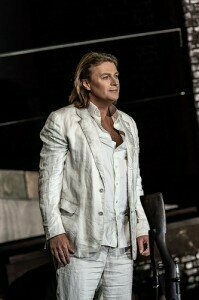 George Zeppenfeld’s King Heinrich was perhaps stereotypically acted, but his singing was top-notch. He possesses a rich, penetrating bass with flawlessly chiselled diction. No need for super-titles for this one.

The Royal Opera Chorus (William Spaulding) was again in excellent shape and must be one of the finest opera choruses in the world at this point, demonstrating great singing, great acting, and visible enthusiasm. The Orchestra of the Royal Opera House, under Andris Nelsons, breathed energy and passion into the score. It is hard to find such a perfect orchestral sound these days.