In Tune Society
Sustainability and Classical Music
How the Metropolitan Opera “Recycles” an Opera in a Good Way
by Maureen Buja July 2nd, 2020 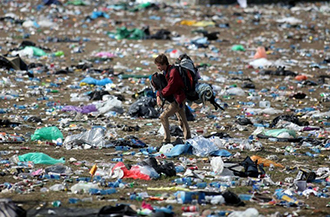 I was asked the other day for some ideas for sustainability and classical music. Hmmm. Not a topic I’ve heard much on. In doing research on sustainability and music, two non-classical topics turn up: how to make rock festivals (think Glastonbury) more green and less like a bomb-site afterward and, in ethnomusicology, how to preserve music of dying cultures, just as one might preserve a language that now had few speakers and none of them young.

But that’s not classical music.

One place where sustainability hits classical music in terms of making productions more available but without the huge hit that a new production can make on your budget seems to be exemplified in The Met Live series. Metropolitan Opera Live in HD started in 2006 and was the brainchild of the then-new general manager of the Met, Peter Gelb. A live broadcast from the Metropolitan Opera House in New York is recorded in high definition (HD) and broadcast to different cinemas in the US and Canada, to arts centers, and to college campuses. Internationally, it also went to Britain, Japan and Norway the first year and later expanding to more countries in Europe, South America, and the Caribbean. For places in the world that are not on the same time zone as the US, separate broadcasts of the operas are arranged, on a schedule that fits the local schedule rather than the US schedule. 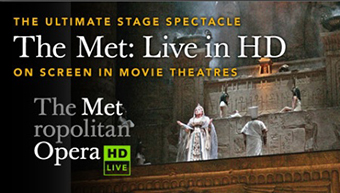 How does this come into sustainability? An opera is expensive. Millions are spent on artists, on sets, on rehearsals and all for a production that may only be on the stage for relatively few days. But, when the top opera company in the world can provide their audience all over the world with 10 operas from all parts of the repertoire, it’s recycling in a way that few in classical music have considered.

From the first season of the Met Live, productions have been of the ‘must-see’ variety, including Julie Taymor’s The Magic Flute (Mozart), the premiere of Tan Dun’s The First Emperor, a gorgeous production of Tchaikovsky’s Eugene Onegin, with Dmitri Hvorostovsky, Renée Fleming and Ramón Varga, and Valery Gergiev conducting.

For the second season, the first Met Live Opera, Gounod’s Roméo et Juliette sold an estimated 97,000 tickets for opening night. That is far beyond the 3,800 seats available in the Met Opera House itself. That would be equivalent to 26 sold-out performances – and that just for opening night. Of the 10 operas scheduled for the 2019-20 broadcasts, 7 were successfully presented and the remaining three victims of the world COVID-19 shutdown.

It’s hard to understate the value of these recordings, which may also be purchased on DVD for home viewing. They give you the best seat in the house because they are shot from cameras along the front of the stage between the singers and the orchestra. Long shots are done from the middle or back of the hall. They preserve the state of opera at the leading venue in the 21st century, and the possibilities of the very large Met Opera House stage give designers a very wide canvas upon which to create. The Met Opera Orchestra is also one of the best in the world and attracts the leading conductors so it’s as though your small town (or big city) had just received the best musical present ever. 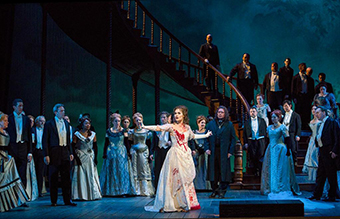 I first saw the Met in HD in Hong Kong, brought there through the efforts of two local opera lovers, Lawrence and Brenda Scofield and their Foundation for the Arts and Music in Asia, Ltd. (FAMA). Opera Hong Kong usually gives 2 productions a year and, in some years, one of the shows may be selections of opera arias, rather than a full opera. Augmenting their offerings with those of the Met have been wonderful.

Operas have been recycled for years, nothing brings in the funds like an old warhorse such as Lucia di Lammermoor or The Barber of Seville, but opera houses cooperate on a very small scale with sometimes 2 or 3 or 4 international companies cooperating on production. Productions may travel (I saw, for example, the Dresden Ring cycle in Shanghai), but to reach the kind of audiences that the Met Live reaches was previously inconceivable. Opera on the radio has brought the sound (Met Opera network broadcasts started in 1931) but opera is both sight and sound. Television broadcasts (from 1977) brought you a hint of what you would see onstage in a live performance. The HD broadcasts onto the silver screen, however, brought everything as large as life and with exceptional sound.

So, think bigger, think global, think sharing. Classical music is made for the world and the world wants it – but by sharing it, not everyone has to foot the bill.