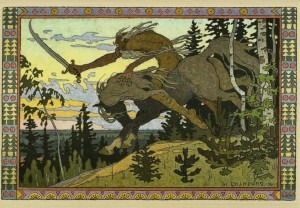 Koshchey the Deathless by Ivan Bilibin, 1901

In the early 20th century, ballet impresario Sergei Diaghilev changed the way he put on ballets: he would now commission original scores. Not only that, but for one of his first ballet productions, it would be based on a new story.

The story combines the mythical firebird with the Russian folktale of Koschei the Deathless or Koschei the Immortal. In most stories, Koschei is the bad guy, having usually abducted the wife of the hero. Koschei is The Deathless because he has hidden his soul; unless the hero can find the hidden, all battles against Koschei are fruitless. The Firebird, in our story, lives in Koschei’s garden. Koschei has not only captured many princesses but also has turned their suitors into stone statues. 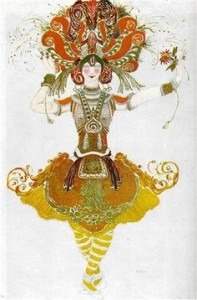 Before he contacted Stravinsky, Diaghilev approached the Russian composer Anatoly Lyadov and then Nikolai Tcherepnin before finally commissioning Stravinsky to write the music to the story developed by Alexandre Benois and choreographer Michel Fokine. The new ballet received its premiere on 25 June 1910 and was an immediate success. The music, the dancing, the costumes, and the scenery all came in for praise from the critics. The success of Firebird was the start of Stravinsky’s rise.

Into the garden of Koschei the Deathless wanders Prince Ivan, who has gotten lost while hunting. He captures the Firebird and when she begs for her life, spares her. In return, she grants him an enchanted feather that will allow him to summon her when in need. Thirteen princesses, held captive by Koschei, entrance him and he falls in love with one. Koschei battles with Ivan, but Ivan summons the Firebird who makes all his enemies dance (34:18) and fall asleep (38:24). The Firebird shows Ivan where Koschei’s soul is hidden (in an egg, in a casket, in a tree stump) and Koschei is defeated (43:19). The ballet concludes with a final procession where the petrified princes awaken in their original forms (45:00), the 13 Princesses return, and Ivan gets his princess. 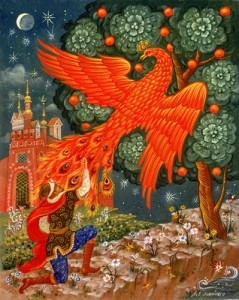 It was an imaginative tale, perfect for Russian-mad France and the dancers of Diagilev’s troupe. Stravinsky’s music veers between the exotic chromatic sound invoking the magic of Koschei’s mystical palace and garden and more mundane folk-like music for the mortals. Compare, for example, the opening sound of the ballet as the Firebird enters with the sound at the end as all magic is banished.

The other sound this work is known for is the magnificent ending where the orchestra slows and slows, repeating its music again and again until they hit the last chord sfff (sforzandissimo) – where we have a sudden change in dynamics. The full orchestra hits the chord and falls from fff (fortissimo) to pp (pianissimo) before bringing up the volume quickly to end again at fff. It has been often imitated but this use of the sforzando ending was all that more wonderful for being surprising.

We have to thank Diaghilev from moving from reusing old music with new steps to actually commissioning new music to go with his new choreography commissions. It resulted in some of the most interesting and innovative 20th century pieces, including not only The Firebird but also Petrushka and The Rite of Spring, Ravel’s Daphnis et Chloe, Prokofiev’s The Prodigal Son, and Debussy’s Jeux and his Prélude à l’après-midi d’un faune.