In Tune Sciences
Souls Without Music
The Condition of Congenital Amusia
by Desiree Ho May 6th, 2013 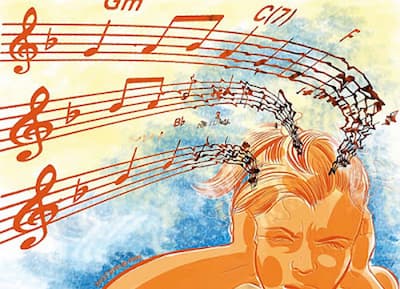 “A man that hath no music in himself, nor is not mov’d with concord of sweet sounds, is fit for treasons, stratagems, and spoils.” This is how Shakespeare described a soul without music. To most of us, music appreciation, like emotion, is a universal quality that is predisposed in the human brain. Yet, studies show that approximately four percent of the general population are born with an inability to perceive music. This inborn condition cannot be explained by hearing loss, brain damage, intellectual deficiencies or lack of exposure — their ability to appreciate music is simply absent at birth.

Patients with the condition congenital amusia have no defects in their hearing, intellect, thinking or memory. Yet, differentiating between pitches or trying to clap in-sync with the rhythm of music can pose great difficulty. The inability to differentiate between consonant (harmonising) and dissonant (clashing) sounds also means that the sweetest music can come across as mere banging. Even discriminating between two pieces of music played successively can be a challenge to them.

American president Ulysses S. Grant often complained that he disliked music. He claimed he could only tell whether or not a tune was ‘Yankee Doodle’, and that military music was especially annoying to him. Left-winged revolutionist Che Guevara likewise once wrote that while leading his partner in a slow, passionate tango, he noticed that everyone else was dancing to the mambo. It turns out that congenital amusia was to blame.

Fortunately, amusia is no barrier to intellectual or academic development. The first documented case of congenital amusia by Peretz et al showed that the subject revealed no abnormalities in MRI brain scans. She even scored above average on a standard intelligence test and was found to have a normal memory. American President Theodore Roosevelt is a good example.

Interestingly, congenital amusia has little to do with the ability to hear sounds, and is neither related to defects in the temporal lobe of the auditory cortex. In fact, brain scans of amusic patients appeared to be very similar to that of normal people when listening to different pitches. In other words, their basic reactions towards pitches are normal.

Then why can’t amusic individuals differentiate between pitches? The reason is that sounds received in the auditory cortex must be temporarily stored in order for the brain to establish relationships between each note. If every note is immediately forgotten once played, then it is impossible to discern a melody from a series of fragmented sounds. The lower temporal lobe, which is responsible for this storage function, is what appears to be inactive in amusic patients and may explain the lack of a conceptual understanding of music. A good analogy is how a sentence can be interpreted as a statement or question depending on whether the last syllable goes up (he plays music?) or down (he plays music.). Most amusic individuals do not appear to have problems discerning statements from questions in English and French however, because the pitch difference is so large. This said, it would be interesting to see whether this is also the case in other languages such as Mandarin, where a small change in tone can lead to a completely different meaning. Although research into the condition continues, we are still a long way from understanding precisely how pitch perception works, or how it is encoded in the genes. 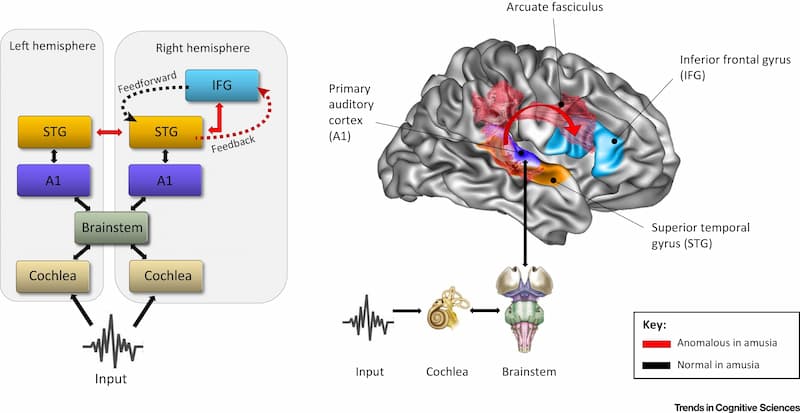 Amusia can become a social inconvenience in situations where music plays a central role. One amusic recalls playing CDs in a social gathering anyway in fear that it is a social taboo to entertain without it. Another amusic talked about how she dreaded going to parties, dinners and dances. Also, amusic individuals often don’t realise that they can’t sing unless they are told, which can lead to embarrassing moments in the karaoke room.

Therefore, amusic patients cannot make sense of music because their brain has no way of remembering the notes, making it difficult to establish any musical impressions. As one of the patients reflected, “When the music finished the sound was always gone — as though it had never happened. And this bewildered me with a sense of failure, of failure to hold on to what I had just heard. Others told me that if I tried to remember I would. But I never did. I have no idea what people mean when they say, ‘I have a tune going round in my head.’ I have never had a tune tell out its music in my head let alone repeat itself!”