In Tune Sciences
When girls are in the audience, choir boys sing for attention
by Peter Keller August 21st, 2018 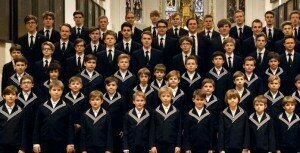 The St. Thomas Choir is an internationally renowned boys choir from Leipzig in Germany. Singing in the choir is a selfless pursuit requiring artistry and discipline.

New research suggests all it takes to elicit surreptitious attention-seeking vocal behaviour among the boys is to place a few teenage girls in the audience.

Four girls were added to an otherwise male audience during repeated performances of a concert sung by the choir. Analysis of audio recordings from individual head-worn microphones revealed that older boys with the deepest voices increased the brightness of their vocal sounds when the girls were present. These boys appeared to be competing for the girls’ attention in a subtle manner that did not disrupt the cooperative activity of making music together.

Where does this ability come from? And could it tell us something about the origins of music?

Music is a vital part of social life across cultures, but science is still not sure exactly why. A puzzled Charles Darwin wrote,

As neither the enjoyment nor the capacity of producing musical notes are faculties of the least use to man in reference to his daily habits of life, they must be ranked amongst the most mysterious with which he is endowed.

Researchers interested in the evolution of music have formed two camps.

One side believes that music originally helped individuals to compete for sexual partners. Music might therefore be analogous to birdsong. In many bird species, males who sing the most intricate songs attract the most females and have the most offspring.

The other camp argues that music is useful because it leads to social cohesion. This perspective presents the idea that group music making increases feelings of interpersonal affiliation, trust, and commitment.

These opposing accounts of the origins of music have generated heated debate. Did we evolve the capacity to produce sublime music simply to get more sex? Or are we driven by higher ideals related to living together in harmony?

A unifying alternative is that competitive and cooperative functions coexist in musical behaviour. Something like this occurs in non-human animals that engage in rhythmic communal signalling.

Rhythmic group signalling in non-human animals is a courtship display produced by congregations of males. Group members maximise the intensity of their collective broadcast by coordinating their signals. The resulting “beacon” effect enhances the ability to attract distant females.

While such coordinated behaviour appears cooperative, in numerous species it arises via competitive mechanisms by which individual males jam their neighbours’ signals.

When many males compete for a smaller number of females, the guys who signal rapidly gain a further advantage because they produce early calls that block the late calls of sluggish signallers. Precise coordination nevertheless occurs because the leading calls trigger reflexive calls in neighbouring individuals.

Stunning displays of seemingly cooperative synchronisation in non-human chorusing turn out to be a side effect of sex-fuelled competition.

Could cooperative and competitive behaviour also be intimately connected in human music? The results of the study with the St. Thomas Choir suggest it might.

Singing with brilliance and power

Similarly to the way that chorusing male insects attract females by outshining rivals, we found the most mature choirboys (the four bass singers from a total of 16 choristers) altered the brightness of their voices in the presence of females who were seated in the front row of the audience.

The effect occurred for two distinctive musical pieces, a chorale and a fugue by J. S. Bach.

These boys who had the deepest voices (linked to high testosterone levels) increased acoustic energy in a high-frequency region of their vocal spectrum. Enhancing this region — known as the “singer’s formant” — adds brilliance and carrying power to the voice. It is a trick used by opera singers to be heard above loud orchestras.

Boosting the singer’s formant is not normally recommended in choir singing, where the goal is to blend rather than stand out. The boys were therefore using an unsanctioned technique. This embellishment is especially noteworthy given the music was composed for religious celebration in the Lutheran Protestant tradition, where flamboyance is discouraged.

The parallel between chorusing insects and choirboys suggests the evolutionary benefit of music may lie in allowing selfish instincts related to sexual competition to be satisfied without disrupting cooperative behaviour and social cohesion. This idea presupposes that humans are sensitive to subtle modifications of behaviour such as an enhanced singer’s formant.

Do you think you can tell the difference? If you would like to find out, we are running an online study testing this. It takes around 10 minutes and you will be told afterwards how accurate your answers were. Click to participate.

The audio file “Opera star or Elmer Fudd? You decide” included above is published under CC-BY-NC-ND licence, via an article in which voice scientist Johann Sundberg conducted a comparative analysis of the voices of tenors Nicolai Gedda and Thomas Burns. The Swedish opera star Gedda had a prominent singer’s formant that caused audience members to swoon. Burns was a keen American singer (and, according to the Library of Congress, attorney, educator, organiser of youth groups, and writer on vocal technique) who can be heard on an infamous RCA recording featuring Florence Foster Jenkins. Sundberg’s analysis failed to detect a singer’s formant in Burns, whose vocal timbre bears an uncanny resemblance to the cartoon character Elmer Fudd.