In Tune Sciences
Rhythm on the brain, and why we can’t stop dancing
by Peter Keller August 28th, 2018 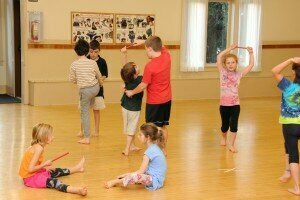 Music and dance are far from idle pastimes. They are universal forms of expression and deeply rewarding activities that fulfil diverse social functions. Both feature in all the world’s cultures and throughout history.

A common feature of music and dance is rhythmic movement, which is often timed with a regular pulse-like beat. But the human capacity for rhythm presents something of a puzzle.

Even though rhythmic coordination seems fundamental to human nature, people vary widely in ability. Some have the machine-like precision of Michael Jackson, others are closer to the case of “beat-deaf” Mathieu.

What are the underlying causes of these individual differences? By looking at the way the brain responds to rhythm, we can begin to understand why many of us can’t help but to move to a beat.

Rhythm is a powerful force. It can regulate mood, ranging from the arousing effect of pounding war drums to the pacifying effect of gently rocking a baby. It can even induce altered states of consciousness, as in spiritual rituals and shamanic traditions involving trance.

Rhythm and music can also be used for therapeutic purposes in the rehabilitation of conditions characterised by motor impairment, such as stroke and Parkinson’s disease.

Even more fundamentally, rhythmic skills displayed in the context of music and dance may have been essential to our evolution as a species.

it appears probable that the progenitors of man, either the males or females or both sexes, before acquiring the power of expressing their mutual love in articulate language, endeavoured to charm each other with musical notes and rhythm.

Rhythmically coordinated body movements may function similarly to fuel sexual attraction by providing an “honest” signal (one that can’t be faked) of an individual’s health and fitness.

Outside the competitive arena of finding a mate, coordinating with others through music and dance facilitates social cohesion by promoting interpersonal bonding, trust, and cooperation.

These prosocial effects of music and dance may have contributed to the flourishing of human culture by preventing the disintegration of early societies into antisocial mobs.

Today, they remain potent enough to be relied on, even in maximum security prisons.

But if music and dancing are so universal, why are some people simply unable to hold a rhythm?

The key to answering this question lies in how the human brain locks onto rhythms in the external environment, and how this process of “neural entrainment” supports the coordination of body movements.

Neural entrainment occurs when regular sensory input, like music with a clear beat, triggers periodic bursts of synchronised brain activity. This periodic activity can continue independently of external rhythmic input due to interactions between already excited neurons. It is as if they expect the sensory input to continue.

Entrainment can thus enhance processing of incoming information by allocating neural resources to the right place at the right time. When performing or dancing to music, entrainment allows the timing of upcoming beats to be predicted.

A recent study on individual differences in rhythmic skill identified relationships between the strength of neural entrainment and the capacity to synchronise movements with musical rhythms.

We measured entrainment to the underlying beat in two types of rhythm using electroencephalography (EEG), a technique where electrical signals reflecting neural activity are recorded via electrodes placed on the head.

One rhythm had a regular beat marked by periodically occurring sound onsets. The other was a relatively complex and jazzier “syncopated” rhythm in which sound onsets were not present on all beats: some were marked by silence.

Results indicated that the strength of neural entrainment was related to people’s ability to move in synchrony with the beat. Individuals with strong neural responses were more accurate at tapping a finger in time with the beat of the two rhythms.

We also found individual differences in brain responses to the two rhythms. While some individuals showed a large difference between strength of entrainment for the regular rhythm versus the syncopated rhythm, others showed only a small difference.

In other words: some people required external physical stimulation to perceive the beat, whereas others were able to generate the beat internally.

Remarkably, people who were good at internally generating beats also performed well on a synchronisation task that required them to predict tempo changes in musical sequences.

So the capacity for internal beat generation turns out to be a reliable marker of rhythmic skill. This adds new meaning to Miles Davis’ reported maxim that “in music, silence is more important than sound”.

But we still don’t know why individual differences in the strength of neural entrainment occur in the first place. They may reflect the efficiency of neural responses at early levels of auditory processing, such as brainstem responses. Or the degree of connectivity between higher-level auditory and motor cortical regions.

Another open question is whether rhythmic skills can be boosted by recent advances in neuroscience. Brain stimulation techniques that induce neural synchrony at specific frequencies provide a promising method for enhancing entrainment and thereby improving an individual’s capacity for rhythm.