Composers Anecdotes
The Colour of Love
by Georg Predota May 7th, 2013 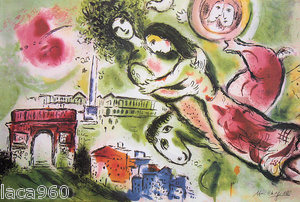 There are certain events in the history of humankind that must have been utterly magical. Take for example 23 September 1964, and picture yourself sitting in the Parisian Opera. All the lights have been dimmed and the central crystal chandelier hanging from the center of the ceiling is unlit. The orchestra plays the finale movement of Mozart’s Jupiter Symphony, and during the final bars of music the chandelier suddenly lights up to reveal a ceiling mural bathed in blazing colours and adorned by ethereal figures in a dreamlike state, all painted by Marc Chagall. At that instant, everybody would have intuitively understood the words of Pablo Picasso who remarked in 1954, “now that Matisse has died, Chagall is the only painter left who understands what colour really is.” For Chagall, “colour is everything, color is vibration like music, and everything is vibration.” 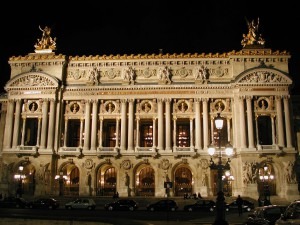 Now that’s a goosebump moment! It is somewhat puzzling, however, that Chagall almost did not get the commission. André Malraux, his good friend and Minister of Culture, was looking for a unique work of art and thought that Chagall would be the ideal artist. However, his choice of artist caused instantaneous controversy, with some factions objecting to having a Russian Jew decorate a French national monument. Others intensely disliked the thought that a modern artist should paint the ceiling of a precious historic building. Chagall was not deterred, and it took him almost a year to complete the massive final canvas. In fact, each of the five sections had to be glued onto polyester panels and hoisted to the ceiling. The mural was designed as a tribute to Russian, German and French composers and compositions, and the press unanimously declared Chagall’s new work a great contribution to French culture. 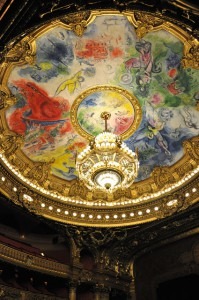 During that magical opening night, Chagall turned to the audience and explained the meaning of the work: “Up there in my painting I wanted to reflect, like a mirror in a bouquet, the dreams and creations of the singers and musicians, to recall the movement of the colourfully attired audience below, and to honour the great opera and ballet composers… Now I offer this work as a gift of gratitude to France and her École de Paris, without which there would be no colour and no freedom.”

The mural appears as a gigantic flower with five open petals. Each petal contains figures and symbols from the world of ballet and opera. Yet, as is entirely characteristic of Chagall’s representational art, form and figures emerge in childlike simplicity, illuminated with colour to suggest the world of dreams. “There is nothing precise in it,” Chagall remarked, “one cannot be precise and still be true.” Yet we can still discern the musical references Chagall alluded to. The blue section is dedicated to Wolfgang Amadeus Mozart, and features images from Chagall’s favorite opera The Magic Flute.

But we also find images related to Modest Mussorgsky’s opera Boris Godunov. In an unusual, but highly thoughtful juxtaposition, the green petal simultaneously features images related to Richard Wagner and to Hector Berlioz. These images take the form of the world’s most celebrated lovers, Tristan and Isolde and, of course, Romeo and Juliette. In his white petal, Chagall presented imageries connected with two iconic composers of French opera, Jean-Philippe Rameau and Claude Debussy. The red section references the ballets The Firebird by Igor Stravinsky — for which Chagall had already designed the sets and costumes for a special rendition in 1945 — and Daphnis and Chloë by Maurice Ravel. Finally, the yellow petal is dedicated to Pyotr Ilyich Tchaikovsky and his most famous ballet Swan Lake. However, it also features Giselle, a ballet in two acts to a libretto by Théophile Gautier and music by Adolphe Adam. Considered one of the oldest ballets in the classical repertoire — first presented at the Paris Opera on 28 June 1841 — Chagall paid homage to the extended and venerable traditions of the building. The story of Giselle, based on a poem by Heinrich Heine, develops the idea that love is stronger than death. And Chagall could not have agreed more, “In our life there is a single colour, as on an artist’s palette, which provides the meaning of life and art. It is the colour of love.”