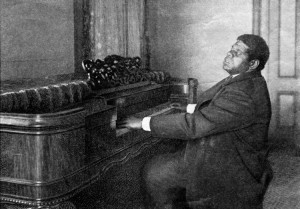 Blind Tom at the piano

“Blind Tom,” as he was generally known, was born into slavery in Columbus, Georgia in 1848. He was sold with his family during infancy to General James Neil Bethune, a country lawyer and newspaper publisher. The blind child was considered mentally impaired, but one day he crawled to the piano and started playing one of the pieces the General’s daughter was practicing. The General quickly recognized the musical aptitude of his young charge—not to mention the possibility of making serious money—and started Tom on lessons. 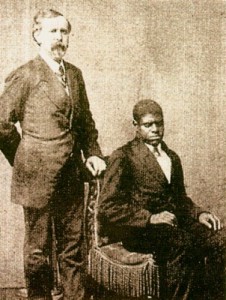 By the tender age of five, Tom apparently composed his first tune and barely a year later he was performing publically throughout Georgia. Recognizing the commercial value of the autistic savant, Blind Tom was hired out to the travelling showman and concert promoter Perry Oliver. He was advertised as “a gorgon with angel’s wings,” emphasizing the transformation from animal to artist. A member of the audience wrote, “Before the audience’s very eyes, Tom would stop twitching and rocking. His blank open-mouthed expression would vanish. He would sweep his hands over the keys with the air of a master and draw the most beautiful, heartfelt music from the instrument. I am astounded. I cannot account for it, no one can, and no one understands it.” 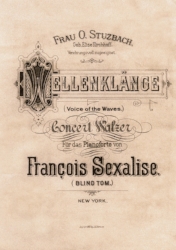 Tom had the ability to reproduce complex musical scores after a single hearing, and over time his repertoire included several thousand works. Besides American and European vernacular music, he also played pieces by Bach, Beethoven, Chopin, Mendelssohn and Liszt, and well as over a hundred of his own compositions! A good number of his compositions, at Tom’s insistence, were published under the pseudonyms, “François Sexalise,” “Prof. W. F. Raymond,” “J.C. Beckel,” and “C.T. Messengale.” 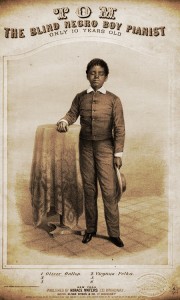 His legendary performances were soon the talk of the nation—he had also been taken on a European concert tour—and he was summoned to the White House to play for President James Buchanan. Tom’s annual earnings from his concerts amounted to a staggering $100,000 dollars, making him the most highly paid pianist of the 19th century! Blind Tom’s life and incredible musical ability caught the imagination of various authors, including Mark Twain, John Steinbeck and Willa Cather who wrote, “Tom is a human phonograph, a sort of animated memory, with sound producing power.”

More recently he has been the subject of scholarly studies, documentaries, novels, poems, motion pictures and even a 2013 song by Elton John entitled, “The Ballad of Blind Tom.”