“It’s a great time to be an opera composer!” That’s the word from Michael Ching, who’s certainly in a position to know. Composer of some 15 operas to date, and with more underway, Ching comes to opera from the administration side. This means he’s keenly aware of those little details like marketing and making best use of the materials at hand.

We discovered Mr. Ching through his 1996 opera Buoso’s Ghost, a “what happens next” in English of Puccini’s Gianni Schicchi.

In looking at his work list, however, we discovered some other interesting works, the most popular of which has been his highly customizable Speed Dating Tonight!, which has received nearly 90 productions in the seven years since its premiere. 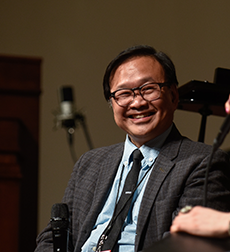 Speed Dating Tonight! is set in a bar that has a social speed dating evening scheduled. In solos, duets, and trios we get to know the various candidates, how they present themselves, and how they get to know each other. For small opera companies or college ensembles, the work is a perfect highly customizable work: any of the parts can be sung by any voice type. There are three set characters: the bartender, the waitress, and the busboy, and then all the speed daters.

The work started with 25 options for performance, now it’s up to 75, and soon will be available in 100 different options. It’s a work that will have high resonance with audiences as they recognize themselves, or their friends (or their rivals) in the characters on stage. In the performance below by the University of Nebraska at Omana, the aria at 6:00 will have many people nodding in agreement, “Dating Sucks.” And, it’s the only opera right now where you’ll find an aria in texting abbreviations (7:40)! Car Man at 24:30 has to be seen to be appreciated, particularly when he meets Cat Lady (26:00).

It’s a fluffy work, by the composer’s own admission, but for the modern small opera company, it’s a work they can use to make the best use of their resources.

This is where his experience as an opera administrator comes into play – he’s currently the Music Director of Amarillo Opera, Composer-in-Residence at the Savannah VOICE Festival and was formerly Artistic Director of Opera Memphis. In his early days at Houston Grand Opera, where star-based productions were the norm, he found that collaboration wasn’t easy. The stars would appear, the production would be bent to their needs, and an opera would hit the stage. The stars didn’t necessarily give their all and the audience didn’t necessarily get the best performance. There was little in the sense of collaboration between all the parts that create an opera. As he’s moved (deliberately) to smaller opera companies, Mr. Ching has found the enthusiasm he sought. He’s also found an outlet for his creative side.

The small one-act and chamber operas he’s created take up local subjects, take up common experiences, or make commentary on modern society. He has said that he ‘writes meta operas of modern life,’ as in Speed Dating Tonight! They also make economic use of the materials to hand. Buoso’s Ghost, for example, which follows directly from the closing chords of Gianni Schicchi, uses the same set and the same singers for both operas. Cheap and cheerful! Or rather, efficient and cost conservative!

One of his skills as a composer is his appreciation of the song and aria forms. As you can hear in the beginning of Speed Dating above, he’s written his recitatives in the manner of discourse, rather than pitched speeches in the traditional manner. His ability to catch the contemporary speaks to his experience as a songwriter. In his background was a stint in Nashville where he tried to make a name in popular and country songwriting – this gave him a facility with lyrics somewhat different than that of most contemporary composers. He’s been his own lyricist for most of his operas.

Brevard Music Center, who did the premiere of the original Speed Dating in 2013, is putting it on again, but with the word virtual everywhere: Mr. Ching sends his recording of the piano part to the singers, they record the vocal part, send it back to him where he matches it up with the piano part, and then a film crew comes to film, lip-synching to the music. Brevard sent a call out to the many people who had been part of the production and had an enthusiastic response. It’s difficult producing music in a vacuum and this solution, though not perfect, will produce something that is definitely a symbol of the time when it was made.

That’s not the only COVID sensitive production he has a hand in. His current project is being put on right now by L’arietta Singapore. It’s a prequel to Speed Dating and designed for the COVID-19 precautions we all undergo. It’s a set of 8 scenes called All Dressed Up (No Place To Go), which I’m sure we can all identify with. L’arietta, silenced as are so many performance groups, commissioned Mr. Ching to use the time as a way to be creative while still maintaining social distancing.

“Shirt” is the first of the eight – check over the next weeks to see the characters prepare for their Speed Dating night. New parts are posted on Fridays.

Upcoming at the Savannah VOICE Festival in 2021 is his sequel to Rossini’s La Cenerentola, entitled The Royal Feast. These continuation operas sprang out of a conversation he had some years ago where he and friends were discussing “what happens next” in some familiar warhorses. But, because of the effects of time, what Rossini had in his opera has to be updated for Ching’s version – in discussing the story with children, who hear the story more than adults do, they demanded new characters, such as mice, and new actions, such as magic, that they were familiar with from the Disney version of Cinderella.

The right opera for the right time and the right composer for that time – meet the work of Michael Ching!