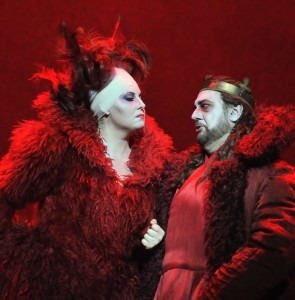 It’s just another Sunday night in February at a Berlin opera house: Wolfgang Schaeuble, German Finance Minister, sits in the stalls with his wife and without visible security two days after negotiating one of the most critical debt restructuring deals with Greece. Berlin’s business elite in formal dress mixes seamlessly with jeans-wearing opera fanatics in the modernist lobby. Legendary conductor Daniel Barenboim stands in the pit. Our generation’s greatest living singer Placido Domingo stars in the title role of Giuseppe Verdi’s Macbeth, the 143rd role in this tenor’s (turned baritone) enormous repertory. The small auditorium accommodating just over 1000 people is packed, the performance starts exactly on time. There’s not a hint of pomp in the Schillertheater, a theatre rebuilt after the war for German spoken drama in the Charlottenburg residential district, and currently serving as the temporary home for the Berliner Staatsoper, whose permanent home Unter den Linden (in the former East Berlin) is undergoing a multi-year renovation. With three permanent opera houses of high quality in the city, it’s hard to get Berliner opera goers over-excited.

This production, a revival of the controversial Macbeth from 2000 by director Peter Mussbach, remains as meaningless now as it was back then. The stark stage is fully covered in red carpeting and centres on a steep mound with a manhole that some of the singers emerge from for no particular reason, but all of them with great difficulty. The unimaginative set design is dragged down further by the strangest collection of costumes. The Scottish soldiers look like Abe Sapien, the amphibian humanoid from the Hellboy comic book series, and waddle like Martians from Tim Burton’s science-fiction movie Mars Attacks! The stiff rubber overcoats are a hindrance to all, forcing many of the choristers into involuntary funny walk routines to avoid tripping, and causing the future war hero Macduff to repeatedly fall over centre stage. And yet this production was brought back. 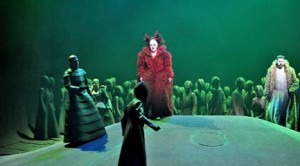 This is largely due to the cast. With stars of Domingo’s calibre, the house will always be full. Though well into his seventies, he still manages to generate some amazing vocal passages with astounding strength, though he now relies mostly on his over fifty years of stage experience and a surprisingly robust voice, while his breath control is slowly leaving him. Domingo can most definitely still pull it off, frequently producing his trademark mellifluous timbre that rings through the house. Whether he is the best available singer for the job, is an altogether different question.

The evening was handily dominated by Ukrainian ueber-soprano Liudmyla Monastyrska (see the www.Interlude.hk review of her as Amelia in Covent Garden’s Ballo in Maschera), who put in a vocally and dramatically spectacular performance. She effortlessly sang the highly dramatic passages at nearly ear-shattering volume while enrapturing the audience with subtly spun pianissimi, demonstrating the advantage of breath control possessed by the young. She also proved an imposing Lady Macbeth of harrowing wickedness, her charisma overshadowing the ridiculous costumes she was forced to wear.

Rene Pape, possibly the finest German bass of the day, delivered a safe and solid Banco, spilling his luscious voice like treacle over an adoring audience. Uruguayan-American tenor Gaston Rivero was a strong voiced Macduff (he alternates the role with Rolando Villazon).

The usually calm and docile Berlin audience was ecstatic over the singing. The director and costume makers wisely were not present to face what might have been an ugly reception. And Wolfgang Schaeuble left the auditorium like any other Berlin member, with not a hint of ceremony.

Plácido Domingo in the role of Macbeth