Clara, Ludwig, or both? 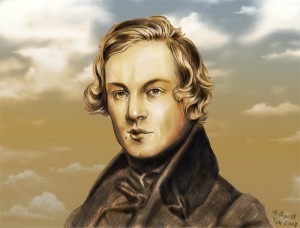 Robert Schumann (1810-1856) had one of the most fascinating and varied biographies of all the nineteenth-century German composers. Forced by his guardian to study law, he rebelled against its pharisaical quibbling at age nineteen and moved to Leipzig in order to take piano lessons from Friedrich Wieck, one of the most prominent teachers of his day. Wieck not only taught Robert, he also tightly orchestrated the musical education of his daughter Clara; he coached her, dressed her and even wrote her diary for her. Above all, he made sure that no boy would get in the way of her musical success. Robert fell in love with Clara when he was twenty-five, and she had just turned sixteen! His sexual exploits were legendary, having just contracted syphilis from a girl named Christel, who was then working as a maid in the Wieck household. Since Robert also engaged in a number of highly public homosexual affairs, it is hardly surprising that Daddy Wieck wanted Robert to stay well clear of his daughter. When Robert and Clara nevertheless became secretly engaged in 1836, Daddy Wieck went ballistic and threatened to shoot Robert if Clara should ever mention his name again. He also made sure that his daughter’s next musical engagements were scheduled for regions north of the Arctic Circle. This forced an undoubtedly painful separation, however, spawned a musical composition that initially encapsulated Robert’s feelings for Clara. 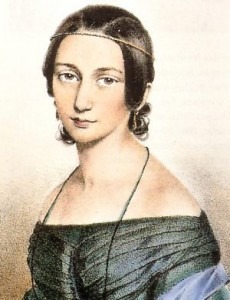 Fantasie in C major, Op. 17
Leif Ove Andsnes, piano Entitled “Ruinen” (Ruins), it was a highly rhapsodic and emotive movement that Robert described to Clara as “the most passionate movement I have ever composed — a deep lament for you.” Since it was originally conceived as a stand-alone movement, Schumann created a unique structure to lend the appearance of unity to an obviously highly fragmented content. Almost constructed in terms of a Hegelian dialectic, each section remains unresolved, yet is indubitably followed — or better yet juxtaposed — by a completely new beginning. The resolution, at least to scholars working at the beginning of the 20th century, was found in the coda, which apparently contains a musical quotation — really an allusion at best — to Ludwig van Beethoven’s song cycle “An die ferne Geliebte” (To the distant Beloved). Schumann himself never acknowledged this musical quotation, but it neatly explained both the reference to his distant beloved Clara and the eventual use of the composition as part of the fundraising effort for the Beethoven monument in Bonn. In December 1835, the philosopher August Wilhelm Schlegel — who had translated all Shakespearian plays into German — issued a call to raise funds for a permanent memorial to Beethoven. His appeal was published in all major musical publications of Germany, France and England. Throughout 1836 various performers and composers heeded Schlegel’s plea, with Luigi Cherubini promising a special fund-raising concert, Ignaz Moscheles giving a benefit concert at the Drury Lane Theatre, and Robert Schumann offering a “Grand Sonata.” He promised to have it published with gold trim and black binding, and use the proceeds of the sale for the building fund. At the time of this proclamation, Schumann had already composed the opening “Ruinen” movement for Clara and now quickly appropriated it for the Beethoven effort. He also went to work on two additional movements — a brilliant “March and Trio” titled Trophäen (Trophies) and a lengthy concluding “Adagio” entitled Palmen (Palm trees). In addition, he prefaced the work with a quotation taken from Friedrich Schlegel, the spiritual mentor of the Beethoven effort. He initially offered the work to the Leipzig publisher Kirstner under the title “Obolen (small contributions) auf Beethovens Monument: Ruinen, Trophaen, Palmen — Grosse Sonate für das Pianoforte für Beethovens Denkmal, von Florestan und Eusebius.” Kirstner refused and Schumann tried his luck with the Viennese publisher Haslinger in January 1837. When Haslinger also turned him down, he offered the work to Breitkopf & Härtel in May 1837. Breitkopf initially asked Schumann to change some of the movement’s subtitles, but in the end, had them all removed. Breitkopf apparently also noted a basic incongruity between the opening movement and the subsequent two movements composed later. In an effort to unify all three movements, Schumann composed an extended alternate ending to the final movement, which actually quoted from the first movement. Eventually, both composer and publisher came to the understanding that this essentially cosmetic change was not capable of providing a sense of overall unity or coherence, and rejected it in favor of the extant coda. They also changed the title of the composition, and it was finally issued under the hybrid name “Fantasie” Op. 17. Remembering the Beethoven effort the composition was dedicated to Franz Liszt, who considered it unsuitable for public performance and never played it in public. Clara Schumann, who openly acknowledged the second movement as her favorite, did not publicly perform the “Fantasie” until 1866, nearly 10 years after Robert’s death. The Beethoven monument, meanwhile, was finally unveiled in August 1845.