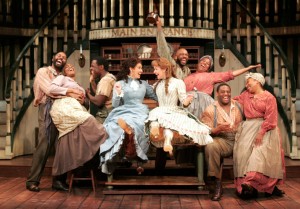 The jubilant title of this series reflects so much of what we love about musicals: catchy songs, bright melodies, and great sounds all around.

The history of the musical (musical comedy, musical play) begins with the first applications of music to theatre. We have innumerable instances of composers providing ‘incidental’ music, such as Beethoven’s incidental music for Goethe’s play Egmont, Mendelssohn’s incidental music for A Midsummer Night’s Dream, or Grieg’s music for Ibsen’s Peer Gynt. All of that, however, places music in the background, supporting the drama. 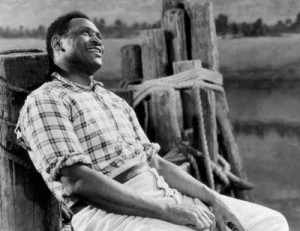 Paul Robeson as Joe in the 1936 production

At first, early musical comedy in the late 19th century merely placed popular songs into fairly light plots. Gradually, however, the music became more integrating, often providing places for the music to give us a deeper view into a character or a situation.

We’ll start in the 1920s, with Jerome Kern’s groundbreaking musical Show Boat. Based on Edna Ferber’s book about the lives and loves of three generations of performers traveling up and down the Mississippi putting on shows on their riverboat, the Cotton Blossom. 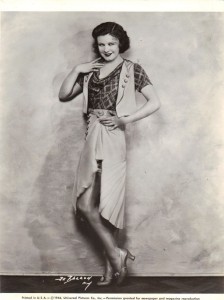 The song ‘Can’t help lovin’ dat man’ provides a hint at some of the problems to come for the characters. Julie, the leading lady on the boat, sings the song but the black workers on the boat find it strange that she would know this song of African-Americans, a hint that perhaps Julie isn’t all she seems.

The other showstopper in Show Boat was ‘Ol’ Man River.’ Sung by Joe, the stevedore on the show boat, the song is also a rare solo for bass. 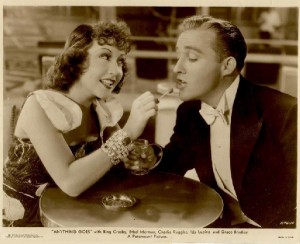 Ethel Merman and Bing Crosby in Anything Goes

Act I: Ol’ Man River (Joe, Stevedores)
Brother George and Ira Gershwin moved their way up the popular musical world of New York, with George’s music matched by Ira’s inspired lyrics. Their 1930 musical Girl Crazy was the stage debut for Ethel Merman and made Ginger Rogers a star. In ‘I Got Rhythm,’ Merman’s distinctive strident sound was shown off to great effect. 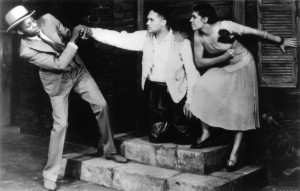 Indiana-born Cole Porter brought a new sophistication to Broadway, with music and lyrics that reflected the knowing wink of the between-war years. His musical Anything Goes (1936) is an excellent example. A number of classic came from this show including ‘Anything Goes,’ ‘I Get a Kick Out of You,’ and ‘You’re the Top.’ 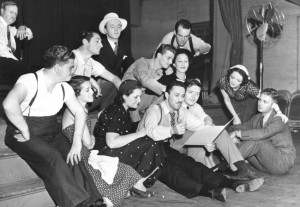 Blitzstein and the cast of The Cradle Will Rock (1937)

A work that sits between opera and music is George Gershwin’s Porgy and Bess (1935). He intended it to be a folk opera – just the kind of music that the characters in the play or musical would sing. Hence, Gershwin wrote his own ‘folk’ songs, yet they are always tinged with a hint of opera, hence, as he said ‘Porgy and Bess becomes a folk opera.’ Two songs, ‘Summertime’ and ‘It Ain’t Necessarily So,’ show the operatic and folk qualities of Gershwin’s writing. The cleverness of the lyrics and the emphasis on rhythm (he made his home in….that fish’s ab-do-min) were made so much of in this musical. 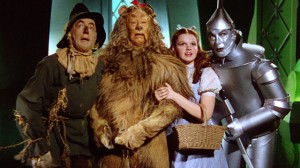 Trevor Nunn’s 1993 film of the Glynebourne production was one of the most faithful of the modern productions, keeping the original recitatives and omitting all the extra dialogue that other productions had added.

In 1937, Mark Blitzstein’s The Cradle Will Rock, brought the reality of the Depression and the fight for unionization to the stage.

We close the 1930s with a definitive musical that never appeared on Broadway but had its debut as a film. The 1900 children’s novel by L. Frank Baum, The Wonderful Wizard of Oz, had been made into musicals before, starting in 1902, but it was the 1939 film with music by Herbert Stothart, that has become our standard.

And so, with a colourful fantasy, we leave the musical of the 1920s and 1930s. We’ll pick up again after WWII!