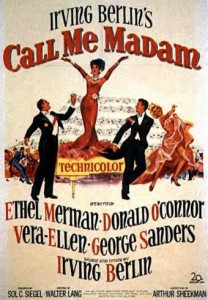 The post WWII era saw more social topics being taken up in the musical such as social injustice, union-busting, and racism, it also saw the introduction of international settings that were normal rather than fantastical. 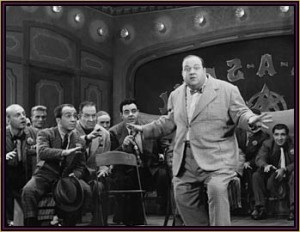 In 1950, Irving Berlin made his 19th appearance on Broadway with Call Me Madam, a humorous tale of Washington and its lamentable foreign policy. The big showstopper number was the duet between Sally Adams (Ethel Merman), the US foreign ambassador to ‘Lichtenburg,’ and her press secretary (Donald O’Connor) who has fallen in love with a princess of the fictitious country. Again, Merman’s unique voice contrasts the brash quality of her character versus the softer quality of her assistant. 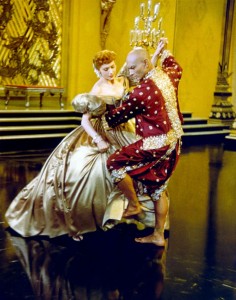 Dance scene from The King and I

Returning to the fabled American past, Frank Loesser took two short stories by New York writer Damon Runyon and created Guys and Dolls, a story of a mobster and a Salvation Army lass – and a lot of gambling and bookmaking. The outstanding ‘Fugue for Tinhorns’ opened the work, and Sky Masterson’s plea for success in ’Luck Be A Lady Tonight’ and Nicely Nicely Johnson faking religious conversion in ‘Sit Down You’re Rockin’ the Boat’ brought Runyon’s characters to life. 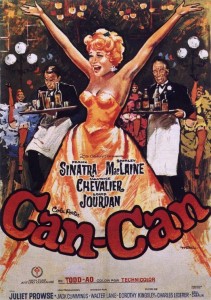 Banned in Thailand for lèse majesté, Rodgers and Hammerstein’s musical The King and I brought to life the memoirs of Anna Leonowens, governess to the King of Siam’s children in the 1860s. The mixing of cultures in ‘Shall We Dance,’ where the King uses typical Thai steps and Anna is waltzing marks this as another progressive musical from R&H.

Cole Porter’s Can-Can (1953), returns us to late 19th-century Paris and the scandals of the scandalous dance, the Can-Can, and the showgirls of Montmartre. One of the closing numbers, ‘I Love Paris,’ exemplifies in a song the changing seasons of the city and the essential reason for the ‘City of Love’ 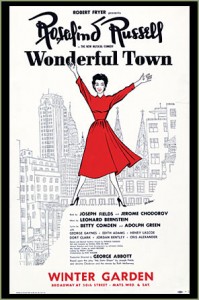 The music of Alexander Borodin was part of the inspiration for another musical set in the exotic east: Kismet (1953). Using melodies from the opera Prince Igor, symphonies 1 and 2, and other music, Robert Wight and George Forrest added lyrics that made the music unforgettable. 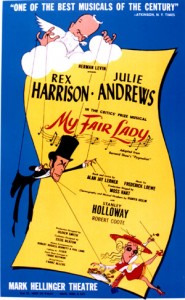 The story of two sisters seeking success in New York was the basis of Leonard Bernstein’s 2nd Broadway musical, Wonderful Town (1953). As the sisters sit in their tiny Greenwich Village apartment, they are hit with homesickness for ‘Ohio.’ 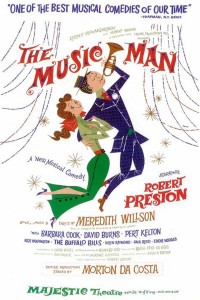 George Bernard Shaw’s 1912 play Pygmalion was the best known of his works. Its musical version as My Fair Lady (1956) created a new heroine in Liza Doolittle and the prickly Henry Higgins. That was Lerner and Loewe’s seventh Broadway musical. Casting a non-singer, Rex Harrison, as the professor of phonetics, Henry Higgins, the show opened the musical stage for more kinds of reader/singer roles. 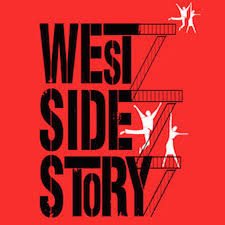 My Fair Lady: Act I: Wouldn’t It Be Loverly?
Act I: I Could Have Danced All Night
Meredith Willson’s ode to his home state of Iowa resulted in The Music Man (1957), the story of a traveling scam artist and how, despite himself, he brought music to River City. Two songs, Marian the Librarian’s ‘Goodnight my Someone,’ and Harold Hill’s triumphant ‘Seventy-Six Trombones’ are interesting because they are, in fact, the same song at different tempos and with very different feelings.

Leonard Bernstein’s next Broadway musical was the groundbreaking West Side Story (1957). Based on Shakespeare’s story of the doomed lovers Romeo and Juliet, West Side Story uses the cross cultural difficulties between ‘Americans’ and Puerto Ricans that was a problem in New York at the time of his setting. The key melodic movement to the work as a whole is the interval of the augmented fourth (such as C to F#), normally avoided in classical and pop music, moving to its resolution on G. The tri-tone used to set the syllables of ‘Ma-ria,’ became the angst at the heart of musical. The musical was also full of some of the most exciting dance sequences on the Broadway stage, including Mambo at the school dance.

The 1950s came to a close with one of the greatest musicals in Rodgers and Hammerstein’s repertoire: The Sound of Music (1959). Still touring the world and familiar to millions through the 1965 film, it was not only a paean to the power of music, but a modern look back at the upcoming horrors of WWII, as the von Trapp family end up as refugees in Switzerland. Maria’s training of the children through ‘Do-Re-Mi’ remains one of the ways many people come to not only the musical but to music itself. ‘Edelweiss,’ by the end of the movie, comes to stand for the strength of Austria.