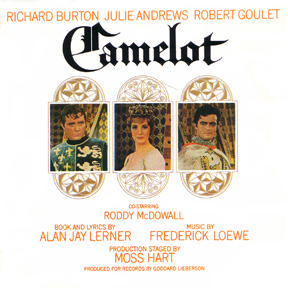 The 1960s saw the continuing evolution of the musical. More and more it took looks at contemporary society, either in the wild world of Wall Street, as in How to Succeed in Business Without Really Trying, or at today’s youth, in Hair. 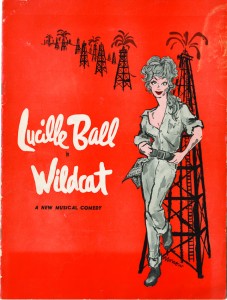 Lerner and Loewe’s Camelot (1960) took its story from a children’s book, T.H. White’s The Once and Future King. It was a difficult show to get to Broadway. The first out-of-town try-outs clocked in an over 4 hours, the writers suffered from health problems, and it was only its appearance on the Ed Sullivan show that brought in the audience. It was newcomer Robert Goulet’s romantic ballad “If Ever I Would Leave You” that caught the audience’s heart. 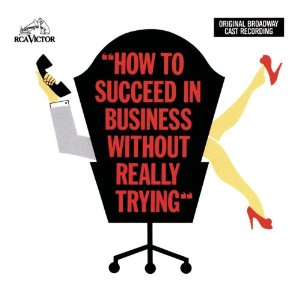 How to Succeed in Business Without Really Trying

A look at the world of Texas oil, Cy Coleman’s Wildcat (1960), saw the Broadway debut of comedienne Lucille Ball in the title role. Her song, “Hey Look Me Over” became the best known song of the show.

Wildcat: Hey, Look Me Over!
Frank Loesser’s look at the rise and rise of a lowly mail-room boy to Chairman of the Board two weeks later was the basis of How to Succeed in Business Without Really Trying (1961). It made a star of the young Robert Morse through his song “I Believe in You.” The counterpoint between the J. Pierrepont Finch and his in-company rivals is captured perfectly in this scene from the 1967 movie. 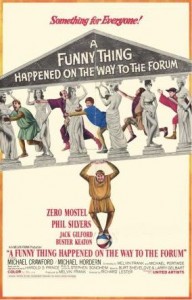 A Funny Thing Happened on the Way to the Forum

Reaching back to the 2nd century BC, Stephen Sondheim used the farces of the Roman playwright Plautus to construct A Funny Thing Happened on the Way to the Forum (1962). The show wasn’t succeeding until Sondheim wrote a new opening number, “Comedy Tonight.” That introduction to this wild comedy brought in the crowds. 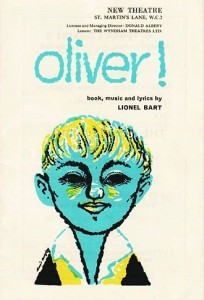 Lionel Bart found his inspiration in the work of Dickens in creating the world of Oliver! (1962). The tale of the mistreated orphan who comes into the hands of juvenile pickpockets in London became particularly popular for school musicals. 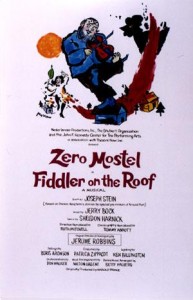 Fiddler on the Roof

In 1964, Jerry Bock put his tale of the shtetl life in Russia on the stage. Fiddler on the Roof used the tales by Sholem Aleichem to tell the story of a father and his five daughters in Russia, just as all of society starts to change around them. The exuberant “To Life” is matched by the heart-breaking “Far From the Home I love” as one daughter departs to exile with her husband in Siberia. 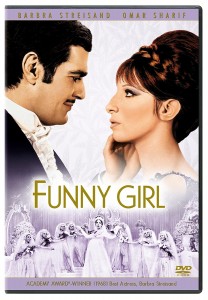 Hello, Dolly! (Original Broadway Cast Recording), Act I: Before the Parade Passes By
Fiddler on the Roof (Original Broadway Cast Recording): To Life
Also in 1964, the life of the comedienne Fanny Brice, whose big career had been in the 1920s, was the basis for Funny Girl. Jule Styne’s music captures the star quality of Brice, portrayed by the actress Barbra Streisand. Two songs show her vulnerability and her determination, “People” and “Don’t Rain on My Parade.” 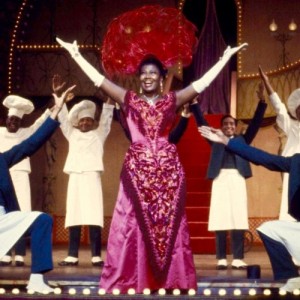 In 1965, a play by Thornton Wilder, The Merchant of Yonkers (later revised as The Matchmaker), hit the Broadway stage with a resounding success as Hello Dolly. Wilder’s tale of 2 small-town salesclerks who take advantage of their boss’s absence to visit the big city to kiss a girl, each, and at the same time, The Matchmaker’s attempt to match up their boss with someone special. 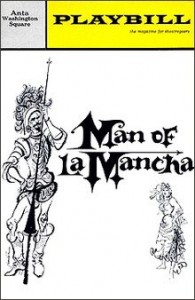 Hello, Dolly!: Act I: Before the Parade Passes By
Hello, Dolly!: Act II: Hello, Dolly! (Dolly)
Mitch Leigh’s Man of La Mancha (1965) took Cervantes’ aged knight, Don Quixote, and set him on the road again. His statement of his beliefs, “To Dream the Impossible Dream,” became an important song for the 1960s, as people sought to follow their dreams. 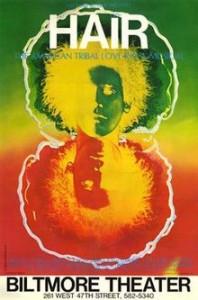 The rock musical Hair (1967) was highly controversial when it hit Broadway: language, drugs, and a nude scene set audiences talking. After opening off-Broadway at Joseph Papp Public Theatre, it hit the Broadway stage in 1968.