Blood, sex and sceptres: two queens battle it out in Maria Stuarda

An opera in two acts, Donizetti’s Maria Stuarda (1835) is about two queens, Mary Stuart and Queen Elizabeth the First – Maria Stuarda and Elisabetta– who are rivals in their love for the Duke of Leicester. Donizetti, who adapts the story from a play by German playwright Friedrich Schiller, takes enormous liberties with history. In reality, the two queens never even met, and Leicester was only a fleeting consideration as a suitor for Mary. In the opera, the queens battle over love and throne alike, culminating in a signed warrant for Mary’s execution.

In the age of Netflix, we devour shows like The Tudors, The Crown, House of the Dragon etc., and it is gratifying to know that even in Donizetti‘s time, royal femmes and their intrigues also exerted power over the public imagination. Clearly, Professor Lo Kingman has picked up on this trend, and Maria Stuarda was duly chosen for MusicaViva’s annual December warhorse, with the singers to match. 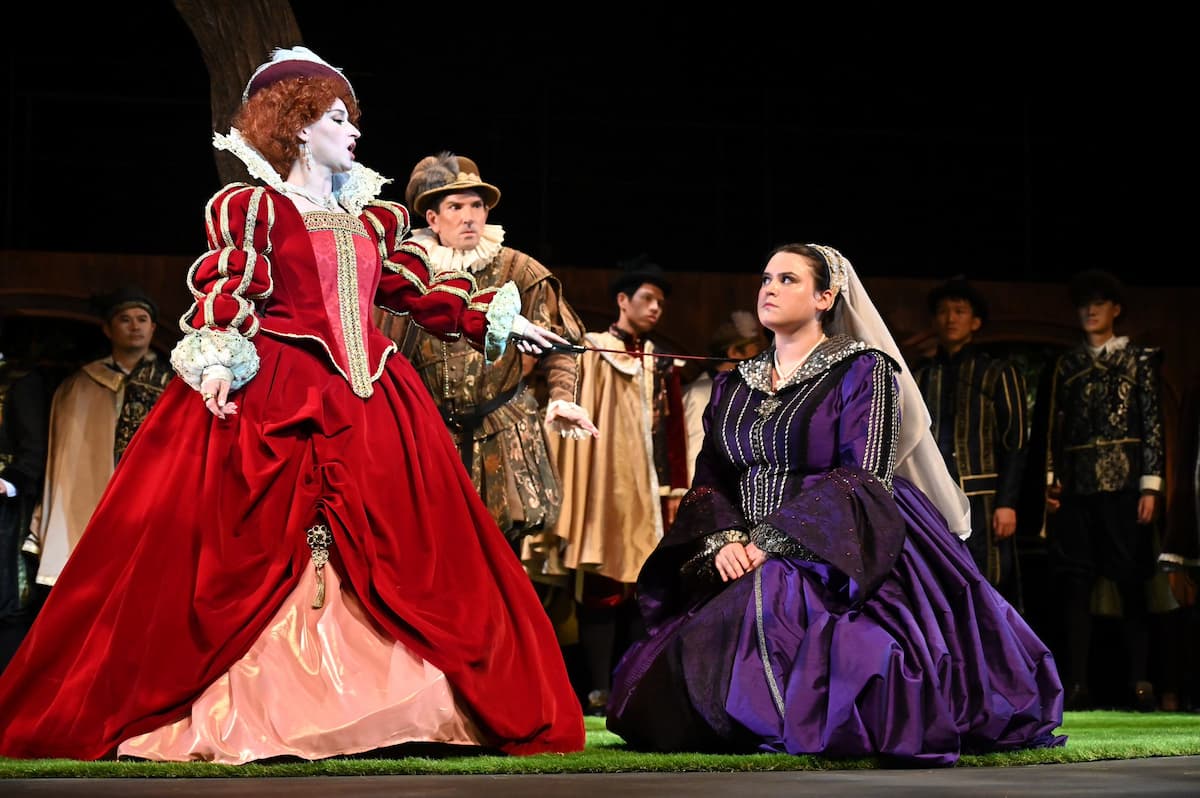 As Elisabetta, mezzo-soprano Hilary Ginther (a stunning Adalgisa in MusicaViva’s Norma last year), is the kind of performer that lights up a stage even before she has even opened her mouth, and when she does, she delivers top-notch singing. With her warm timbre and earthy tessiture, she was reminiscent of both a young Agnes Baltsa and Huguette Tourangeau. Ginther also possesses an impressive evenness throughout the registers, not to mention sensational clarion high notes that soar at will over the ensemble. In a silvery-white gown and glittering ruff (designed by Anthony Cheng), she looked and sounded every inch a queen.

Soprano Meryl Dominguez (a strong Norma last year) plays the titular character of Maria Stuarda, and her interpretation was a revelation: she is no noble victim crushed underfoot by an unjust and jealous rival. Dominguez styles her Maria as more of a proud, shrewd and manipulative player. Employing a whole arsenal of vocal colours and shadings, Dominguez‘s Maria plays upon the heartstrings of all the different characters she is paired with onstage. With Anna, her attendant (sweetly sung by soprano Kenix Tsang), she is playful and almost girlish, tossing out melismas with ease. With Talbot, she is every inch a noble Catholic, calling for justice from the heavens with a velvet timbre. Before a grieving crowd, she is all authority and forgiveness, floating pianissimi, a martyr unto death. Above all, with her suitor Leicester, Dominguez combines lightness of tone with a smoothly liquid line, demonstrating grace and fragility. With him, she is no queen, but an innocent princess requiring rescue. 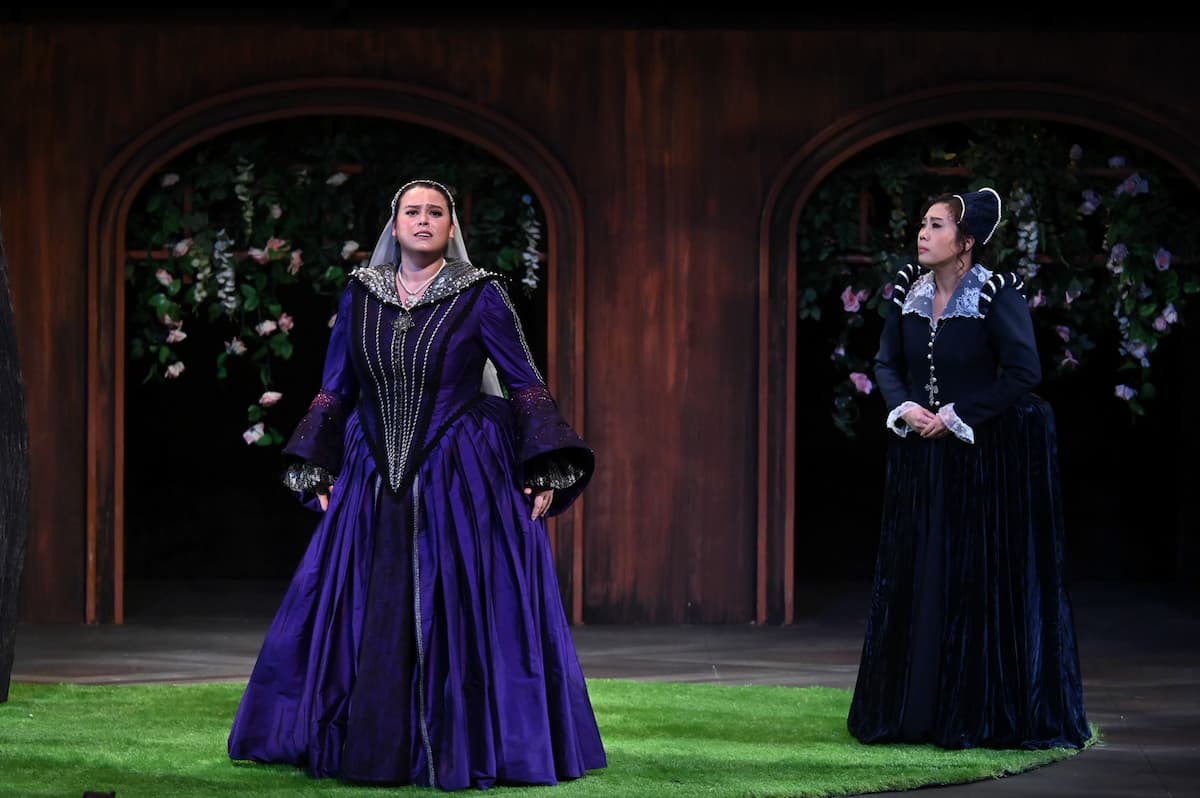 Only in her great confrontation scene with Elisabetta does Maria come across as genuine. Infamously, censors were outraged by certain lines in the libretto: in Act 2, Maria spits at Elisabetta, “Figlia impura di Bolena…meretrice indegna oscena….vil bastarda“ (“Impure daughter of Boleyn…obscene, unworthy prostitute…vile bastard”) — lines so dripping with nastiness that opera singers got into actual fist fights as a consequence. Here Dominguez does not disappoint, and infuses the text with the requisite venom and richly resonant vocalism. This same tone is artfully used in the beginning of Act 2, Scene 2, when Maria bursts out in a display of passion over the indignity of her situation — “am I not also a daughter of the Tudors?”

In comparison, Ginther’s declamatory Elisabetta comes across as a simple, straightforward woman, emotionally honest despite possessing a fiery temperament. She has reason to fear Dominguez’s chameleon-like Maria Stuarda: a truly dangerous rival to the throne. Garbed in red on the way to the block, this Maria shows every intention of returning as a vengeful ghost, despite her promises to the contrary. 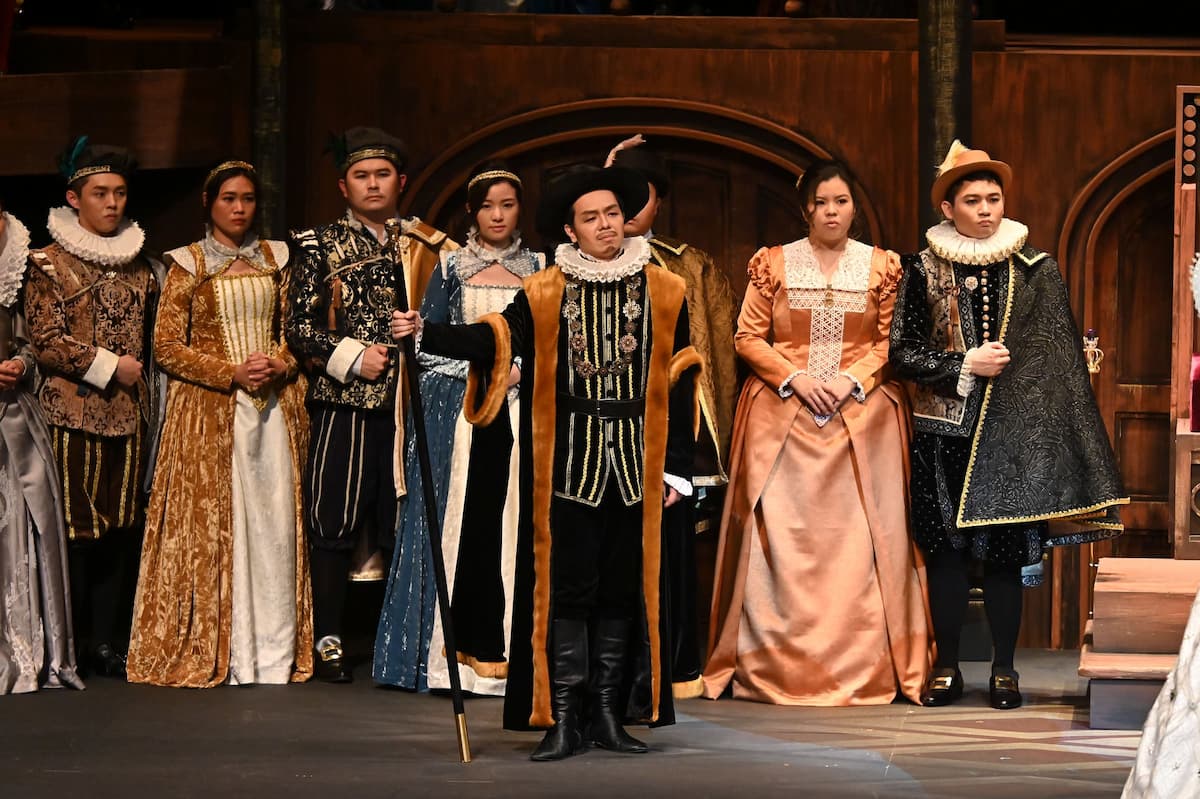 The men proved the weaker sex of the evening. Tenor Todd Willander (Pollione in Norma) sang Leicester with unclear diction and an oddly spread tone throughout, rendering his character somewhat colorless. (His performance highlighted the idea that the queens in this production were perhaps not fighting over Leicester per se, but over what his loyalty represented). Michael Lam‘s (baritone) Cecil possessed a brightness in his tone in the music requiring more energetic, staccato interjections, but lacked legato in the more melodic lines; additionally, his lack of both the required fervor and tonal clarity to convince an overwrought Elisabetta to execute her rival was anathema to the drama. Local favorite Sammy Chien (bass-baritone) as Talbot displayed a sympathetic, paternal stage presence, but woefully under-sang all evening. Finally, the male chorus mostly looked unengaged and sounded scattered – this however may be due to under-direction on a crowded stage.

The orchestra was at best dutiful, at worst flaccid, often lagging behind singers. Stylistically, conductor Wilson Ng seemed somewhat out of his depth. Moments which demanded dramatic accentuation often went unmarked — for instance, when Elisabetta thrice tried to sign the death warrant of her rival, the orchestra simply played the music through, disconnected from the action onstage. Donizetti’s scores are typically full of word-painting, and it is a shame that so many musical opportunities were missed.

Despite the flaws, the ultimate strength of this opera lies with the two female leads, and kudos must go to Musica Viva for providing star vehicles for Dominguez and Ginther, who easily balanced out the weaker points of the production. Had they been better supported by other cast members and by tighter musical direction, this really would have been a show for the history books.

Sylvia Woo is a writer based in Hong Kong. She is also an avid opera and theatre lover.

*This review was based on the evening performance on Saturday, 10th December. In the alternate cast (matinee 10, 11 Dec), Maria is sung by Sylvia Sang Eun-Lee, Elisabetta by Anna Laurenzo, Leicester by Matteo Mezzaro, Talbot by Frankie Fung, Cecil by Isaac Droscha, and Anna by Colette Lam.