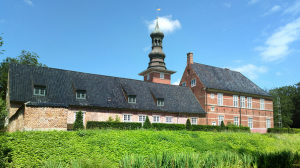 Every summer a rather special piano festival takes place at Schloss vor Husum in the remote North German seaside town of Husum in Schleswig-Holstein. It is not a festival which parades its star performers. Rather, its very remoteness and its special focus on the unknown corners and by-ways of piano repertoire make it all the more intriguing.

Established in 1987, Rarities of Piano Music is the brainchild of Berlin-born pianist and pedagogue Peter Froundjian. When he was appointed to head the music school based in the Schloss vor Husum, he saw the possibility of a festival that would celebrate non-mainstream piano repertoire. The festival champions lesser-known and rarely-performed piano music and attracts international performers, and in thirty years it has grown from an obscure niche event to a festival renowned among connoisseurs of obscure piano music, both audience and performers alike.

Every year, in the second week of August, pianists and lovers of piano music gather, not to hear the standard canon of Mozart, Beethoven, Schubert or Chopin (though there are performances of lesser-known works by these composers), but instead piano compositions of forgotten or little-known composers whose work demonstrates the huge range and variety of the piano and its literature. Concerts take place in the intimate Rittersaal (Knight’s Hall), which seats around 200 guests.

Previous performers have included Marc-André Hamelin, Jonathan Plowright, Stephen Hough, Joseph Moog, Luiza Borac, Sergej Babayan, Fazil Say, Gabriela Montero, Andrew Zolinsky, Kathryn Stott, Piotr Anderszewski and Hamish Milne. With such artists as these appearing at the festival, virtuosity goes without saying, but obscurity is the overriding theme of the festival. Any pianist may apply to perform and submit repertoire choices which are then agreed based on what has been performed before and what has not.

For the “armchair listener”, one can enjoy the music from the annual festival via a series of live recordings released by Danacord, stretching right back to 1987. A pianist friend of mine flagged up the recordings to me on Spotify and I have spent many hours exploring this interesting and unusual archive.

We are fed a narrow diet of the “standard canon” in concerts and on the radio, and the wealth and variety of piano literature tends to be overlooked as better-known composers and works are more heavily promoted. The Rarities of Piano Festival, and its accompanying easy-to-access recordings, offers the inquisitive performer or listener a chance to unearth rare gems and curiosities of the repertoire. Here are just a handful of discoveries I’ve made from browsing the Rarities of Piano Music archive: