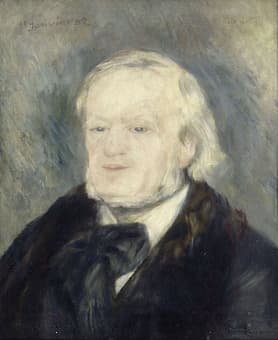 Two failed meetings later, he was finally able to meet Wagner in Palermo, where Wagner had gone for his health. While in Italy, Wagner was working on Parsifal, and when Renoir met him, he had just laid down his pen having completed his final opera.

The two men met for about 45 minutes, over a few drinks, and Renoir proposed that he return the next day for a sitting. Wagner agreed and Renoir went to work on 15 January. He stopped after 35 minutes when the ailing Wagner lost ‘some of his good humor’ and began feeling stiff. But in those 35 minutes, he’d produced a remarkable portrait.

Wagner asked to see the painting and his reaction was interesting. He said, according to a letter Renoir wrote to a friend that same day, ‘Ah! Ah! It’s true that I look like a Protestant minister.’ Nonetheless, Renoir was happy with the outcome and said, ‘it wasn’t too much of a flop: there is something of that admirable face in it.’ 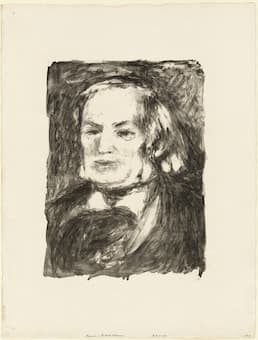 The critic Julius Meier-Graefe, viewing the work 20 years later, said, ‘it is a remarkable document. It reveals certain aspects of Wagner with an astonishing, almost pitiless, psychology. One cannot say how aware the painter was of this: but in any case, the painting reveals just how free the artist felt when faced with the object of his admiration.’

In 1900, Renoir revisited Wagner as a subject and created a lithograph portrait of the composer that seems to distill the elements of the painting to a few strong elements –the prominent jaw line, the high forehead, and the piercing gaze. Wagner’s tie is reduced to a swirl and his ministerial beard has nearly vanished.


For Renoir, the brief opportunity to capture a subject he admired forced him to abbreviate the job he could have done. Compare the Wagner portrait with the dual portrait he did of Charles and George Durand-Ruel. They were the sons of an art dealer who had done much to encourage the Impressionists. We can see some similarities, however, such as the varieties of colours he presents in Wagner’s severe black clothing and how he creates life in the background. 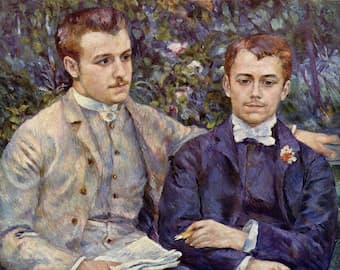 Wagner died of a heart attack, after many years of heart problems, in Venice, Italy, on 13 February 1883. During the final performance of Parsifal at Bayreuth the preceding August, he had entered the pit during Act 3 and, replacing conductor Hermann Levi, led the opera to its end.

His meeting with Renoir put two masters in the same room together. The conversation between the two artists was conducted in faulty French and defective German, as neither really spoke the other’s language, but the outcome gives us a unique view of the composer at the end of his life.