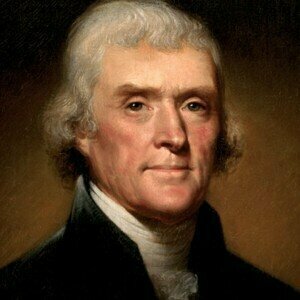 Thomas Jefferson (1743-1826) was the principal author of the Declaration of Independence, and he later served as the 3rd president of the United States. However, he was not only a politician but also a planter, lawyer, and architect with wide-ranging interests in surveying, mathematics, horticulture and mechanics. And did I mention that he was passionate about music? Jefferson declared, “music is the favorite passion of my soul, and fortune has cast my lot in a country where it is in a state of deplorable barbarism.” He started taking violin lessons as a young boy and claimed to have practiced at least three hours a day. And as a student in Williamsburg, he participated in weekly concerts at the Governor’s Palace.

Music, it seems, played a particularly significant role in his courtship of the rich young widow Martha Wayles Skelton. A biographer reports, “Two of Mr. Jefferson’s rivals happened to meet at Mrs. Skelton’s door-stone. They were shown into a room from which they heard her harpsichord and voice, accompanied by Mr. Jefferson’s violin and voice, in the passages of a touching song. They listened for a stanza or two. Whether something in the words, or in the tones of the singers appeared suggestive to them, tradition does not say, but it does aver that they took their hats and retired, to return no more on the same errand!” It’s not really surprising that Jefferson and Martha were wed on 1 January 1772.

Jefferson purchased a number of instruments, including a couple of harpsichords and a guitar for his granddaughter. Virginia Randolph Trist remembered, “I had for a long time a great desire to have a guitar. A lady of our neighborhood was going to the West, and wished to part with her guitar, but she asked so high a price that I never in my dreams aspired to its possession. One morning, on going down to breakfast, I saw the guitar. It had been sent up by Mrs. — for us to look at, and grandpapa told me that if I would promise to learn to play on it I should have it. I shall never forget my ecstasies. I was but fourteen years old, and the first wish of my heart was unexpectedly gratified.” 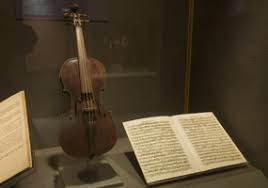 Violin and sheet music of Jefferson

Jefferson’s financial account also lists the purchase of several violins, including a pocket instrument he took on his travels. His most valuable purchase appears to have been an instrument crafted in Cremona, possibly from the school of Nicolò Amati. The current whereabouts of this particular instrument is uncertain, as is his competence as a violinist. Contemporary sources disagree on the level of Jefferson’s musical talent, but his music library at Monticello, catalogued by 1783, lists concertos and sonatas by Corelli, Vivaldi, Handel, Pugnani, Boccherini, and others. In addition, the violin treatise The Art of Playing on the Violin by Francesco Geminiani is heavily annotated in Jefferson’s hand. He certainly had a rather diverse taste in music, admiring Haydn and Italian and French music in general. In addition, he also held a large collection of American music. The 6,500 volumes of sheet music that “Jefferson sold to the government formed the nucleus of the Library of Congress.”

Jefferson passed his love for music to his daughter. “Do not neglect your music,” he writes, “it will be a companion which will sweeten many hours of life to you.” But what about Jefferson’s connection with Mozart? Joining Benjamin Franklin and John Adams as ministers in Europe, Jefferson spent five years in Paris working on trade agreements with England, Spain, and France. Recently widowed, Jefferson arranged to meet Wolfgang Amadeus Mozart, who was visiting Paris. He was planning to commission a piece in memory of his late wife. However, Jefferson apparently was horrified by Mozart’s “ineptness and lack of grace. The gentleman is socially uncouth and frivolous,” he wrote. As such the commission never materialized, but Jefferson remained a lifelong devotee to Mozart’s “heavenly music.”