In Tune Society
Playing Together – Women’s Orchestras and Women in Orchestras
by Maureen Buja February 27th, 2018 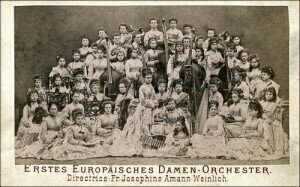 The late-19th and early 20th centuries saw a new phenomenon: all-women orchestras. Kept out of the traditional orchestras by reason of gender (it certainly wasn’t because of talent), women musicians came together to form their own orchestras.

There had been women’s orchestras in New York and Boston from the early 1870s, including such groups as the Vienna Damen Orchester, the Berlin Lady Orchestra, Marie Roller’s “Elite Kapelle,” the Ladies’ Philharmony, and The Women’s String Orchestra of New York, to name just a few, usually associated with local theatres.

Vienna also had its women’s orchestra, formed by Josephine Weinlich and growing from string quartet to septet to small ensemble until by 1871, they had 22 players. After their Russia tour, critics asked for more brass and the orchestra added 7 men – so the women’s orchestra became integrated. 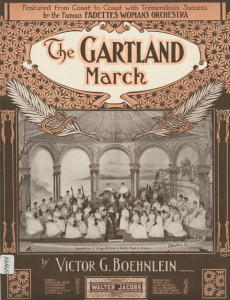 The Fadette Orchestra on the cover of The Gartland March

In 1888, the Boston Fadette Orchestra was organized and toured the US: between 1890 and 1920, they gave over 6,000 concerts, half of them as headliners. Their repertoire included opera overtures and symphonies, as well as lighter repertoire. Their conductor was Caroline B. Nicholas, who led the orchestra for over 30 years.

English composer Mary Wurm, formerly a student of Clara Schumann, founded and led a women’s orchestra in Berlin in 1898. Before that, she had been the first female conductor of the Berlin Philharmonic, in 1887.

Critics at the time thought that all women’s orchestras should confine themselves solely to light repertoire, and be used when an orchestra was needed for a social engagement. Long travel to engagement and long rehearsals were unthinkable. Women, on the other hand, argued that they had spent their time and money on professional training, but all the jobs went to men. The traditional women’s instruments of piano, harp, and guitar (because they were appropriate for home entertainment and did not involve facials exertions or body movements that interfered with the portrait of grace that a woman was supped to emanate), were augmented by women learning the violin, and brass, wind, and percussion instruments, as well as all the other instruments in the orchestra. 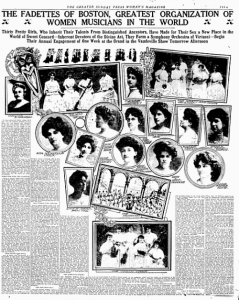 Fadettes in a Pittsburgh, PA, newspaper in 1909

In this 1909 newspaper article on the Fadettes, note that the headlines emphasize their beauty and that they have inherited ‘their talents from distinguished ancestors,’ without mention of the hours in the practice room!

Women began to be admitted to men’s orchestras starting in 1919 (Queen’s Hall Orchestra of London) but it was WWII that changed the situation for women. The absence of men to the war front opened chairs in the orchestras at home and women were increasingly able to keep those positions. One symphony administrator admitted that the addition of women to his orchestra meant an improvement in the generally raucous nature of the formerly all-male groups. Women’s orchestras began to be disbanded as opportunities to play in more prominent ensembles started to rob them of their players.

The oldest women’s orchestra in the world is the Cleveland Women’s Orchestra, founded in 1935 and still playing today. In all that time, they have had only two conductors: Hyman Schandler (then 2nd violinist in the Cleveland Orchestra), and 55 years later, Robert Cronquist. 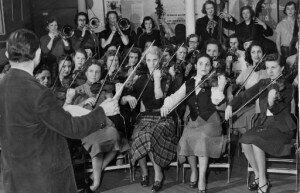 Don’t think of women’s orchestras as just a gender throwaway. Women created their own ensembles that were just as serious as the closed men’s orchestras. Women had the same training as men, but the opportunities for public performance had to be self-made, rather than state supported. Not everyone wants to be a soloist and women’s orchestras provided the thin edge of the symphonic wedge for playing the common repertoire.