In Tune Society
Women on the Podium
by Maureen Buja March 2nd, 2018 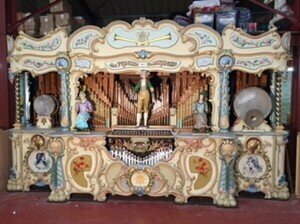 Did the diarist Samuel Pepys alert us to women conductors in 17th century London?

There we went and eat and drank and heard musique at the Globe, and saw the simple motion that is there of a woman with a rod in her hand keeping time to the musique while it plays, which is simple, methinks. (6 June 1661)

Unfortunately, what Pepys was probably referring to was an automaton attached to a mechanical organ where the action of the organ activated the mechanical conductor. 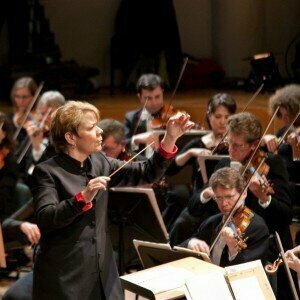 Now, fortunately, women conductors are everywhere – leading the major orchestras of the world and the minor ones as well. Here’s an overview of just five of them.

We start with the incomparable Marin Alsop, conductor of the Baltimore Symphony Orchestra since 2007 and of the São Paulo Orchestra since 2012. She attended Juilliard and did a bachelor’s and master’s degree in violin and won the Koussevitzky conducting prize at Tanglewood in 1989. She’s had positions at the Colorado Symphony, the Richmond (VA) Symphony, and the Eugene Symphony, and held the Creative Conductor Chair at the St. Louis Symphony from 1994-1996. Alsop’s Dvořák recordings have won her international praise.

Uruguayan conductor Gisèle Ben-Dor is known for her performances of Latin American music, including the music of Ginastera, Villa-Lobos, Revueltas, and others. She led the Santa Barbara Symphony Orchestra from 1994, becoming its conductor laureate in 2006, and has been music director of the Boston Pro-Arte Chamber Orchestra from 1991, as well as being Resident Conductor of the Houston Symphony and the Louisville Orchestra. As guest conductor, she’s appeared with the New York Philharmonic, London Symphony Orchestra, Los Angeles Philharmonic, BBC National Orchestra of Wales, Helsinki Philharmonic, Minnesota Orchestra, Orchestre de la Suisse Romande, New World Symphony, and many, many others. 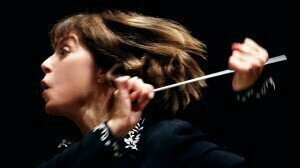 JoAnn Falletta started her career as a virtuoso mandolin and guitar player but started conducting in her freshman year at Mannes College of Music. Eventually, she was awarded her doctorate in conducting at Juilliard. After serving as associate conductor of the Milwaukee Symphony Orchestra (1985-88), in 1991 she was appointed music director of the Virginia Symphony Orchestra and her contract now goes through 2021. She has been music director of the Buffalo (NY) Philharmonic Orchestra since 1999. She champions American music and her 2009 recording of the music of John Corigliano won a double Grammy Award for Best Classical Vocal Performance and Best Classical Contemporary Composition. 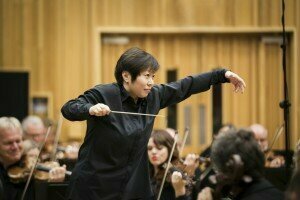 Lithuanian conductor Mirga Gražinytė-Tyla came from a musical family: her father was a choir conductor and her mother a pianist and singer; her grandmother was a violinist; her great-uncle an organist and her great-aunt a composer. She’s a rare conductor who didn’t study a musical instrument before taking up the baton. She started with choir conducting and after her studies at the University of Music and Performing Art in Graz, Austria, she went on to further conducting studies in Leipzig and Zurich. In 2011 she started conducting with the Theater Heidelberg, then the Bern Opera, her first position was in 2015 as music director of the Salzburger Landestreater, ending in the 2016-17 season. After her appointment as a Dudamel Fellow at the Los Angeles Philharmonic, she was first assistant conductor and then associate conductor with the orchestra, through 2017. She is now music director of the City of Birmingham Symphony Orchestra.

With these five conductors, we can see the enormous variety of their expertise. Their training is the best, their skills recognized – now we need the orchestra boards of the world to widen their search to include the best conductors in the world…. not just all the male ones.