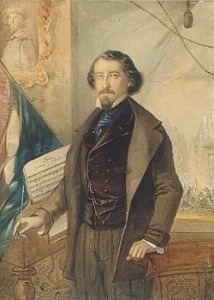 We’ve looked at the national anthems of France and the UK and the US and Germany. Now it’s Italy and Spain.

Italy, long a country of separate national states, was unified in 1870 with the capture of Rome, and the suppression of papal influence outside the Vatican. It was only after WWII that ‘Il Canto degli Italiani’ (The Song of the Italians) was provisionally chosen as the national anthem. It was made official only in 2012. The original poem by Gofreddo Mamali has five stanzas and makes reference to heroic ‘Italians’ from Scipio (who defeated Hannibal in the Second Punic War of 201 BC) and Victory who must become a slave so that Rome will be victorious. The second verse is a call for unity: … di fonderci insieme / già l’ora suonò (…the hour has struck for us to unite).

In its official form as an anthem, the first verse, ‘Fratelli di’Italia / l’Italia s’è desta…’ (Brothers of Italy, / Italy has woken.…) is repeated twice to slightly different music, then the chorus ‘Stringiamci a coorte, / siam pronti alla morte / … l’Italia chiamò’ (Let us join in a cohort / we are ready to die…Italy has called), concluding with a resounding ‘Sì’ (Yes!), that is not in the original poem.

The music was written by Michele Novaro after the poem had been sent to him by its author, Goffredo Mameli. Sometimes the work is known as the Inno di Mameli (Mameli’s Hymn). The song was publically sung for the first time on 10 December 1847 during a celebration for the 101st anniversary of the expulsion of Austrian powers from Genoa, which, at the same time, was a demonstration against the foreign occupation of Italy. After that, the song spread over all Italy and became a symbol of Italian Unification.

The national anthem of Spain is one of only 4 in the world that has no official lyrics. At the same time, the anthem is one of the oldest in the world, first printed in 1761 as La Marcha Granadera (The March of the Grenadiers). The Marcha Real (Royal March) was made the national anthem during the reign of Queen Isabel II (ruled 1843-1870). The lack of lyrics has periodically caused national competitions for them, all of which have failed. The last competition, in 2008, was cancelled after it was felt that the submissions were, in general, too nationalistic in tone.

When the song was first published in 1761, it was part of Libro de la Ordenanza de los Toques de Pífanos y Tambores que se tocan nuevamente en la Ynfantª Española (Book of the Ordenance of Newly Played Military Drum and Fife Calls by The Spanish Infantry), written by Manuel de Espinosa de los Monteros, about whom little is known. It was orchestrated in 1908 by Bartolomé Pérez Casas, who was Major Music in the Royal Corps of Halberdier Guards. In 1997, the Spanish government purchased the rights to Pérez Casas’ orchestration and commissioned Francisco Grau Vegara, a musician, composer, and the first General of Music in the Spanish army to harmonize Pérez Casas’ orchestration. It is his version that stands as the official anthem.

The lack of lyrics doesn’t detract from this working being nationalistic. As it is heard around the world, usually in association with sporting event, the Spanish tie becomes even stronger.

Next: Russia and China