In Tune Society
Patriotism and Nationalism II: US and Germany
by Maureen Buja September 2nd, 2016 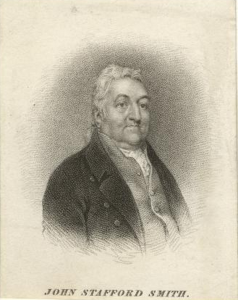 Portrait of John Stafford Smith by Thomas Illman after William Behnes, around 1820

The last time we looked at the national anthems of France and the UK. Now we’ll look at the US and Germany.

The United States of America’s Star-Spangled Banner is a memento of a domestic war from over two hundred years ago: the War of 1812. A poem, Defence of Fort McHenry, written in 1814 by Francis Scott Key, a lawyer and amateur poet. It was set to a popular song from England, To Anacreon in Heaven, which is a prayer to a pagan god asking for music and drink. The song was written by John Stafford Smith sometime around 1766 and it speaks well to its quality that the melody would be remembered some 60 years later.

The poem is a paean to the US flag, which was seen through the morning air just as it had been seen at nightfall, flying high over the fort in Baltimore Harbor. During the night, the British had bombarded the fort (…the rockets’ red glare, the bombs bursting in air). Key wrote the poem on 3 September 1814, after witnessing the bombardment from the deck of the British ships, where he was being held captive after negotiating for an exchange of prisoners and overhearing the bombardment plans. That particular point of view, from a partisan being held by the enemy and only knowing his country was victorious from seeing the flag still plying, makes this poem particularly poignant. The poem was published as a broadside with music after his release on 16 September 1814, was in the Baltimore papers soon afterward and was published in Philadelphia, then the largest city in the US, by November. The song was standardized at the request of President Woodrow Wilson in 1917 with the advice of 5 musicians: Walter Damrosch, Will Earhart, Arnold J. Gantvoort, Oscar Sonneck, and John Philip Sousa. It was made the national anthem only in 1931 after 5 million people signed a petition to Congress. 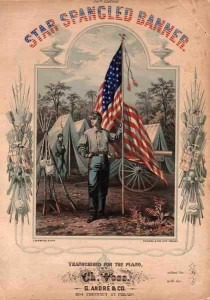 A Civil War–era sheet music cover of the song

The melody is famously difficult, covering a range of an octave and a fifth (most songs are in a 4-6 note range).

Smith: The Star Spangled Banner (arr. B. Smith and R. Kirby) (United States Army Band)
For Germany, their national anthem is to a melody written in 1797 by an Austrian for the Holy Roman Emperor. Franz Joseph Haydn’s music for Lorenz Leopold Haschka’s poem “Gott erhalte Franz den Kaiser” (“God save Franz the Emperor”) was intended to be a parallel anthem to that of the UK (God save the King).

New lyrics for the song were written by August Heinrich Hoffman von Fallersleben in 1841 and were an appeal for a unified Germany, then under the rule of local monarchs after the breakup of the Holy Roman Empire and the 1815 Congress of Vienna’s reinstatement of different German principalities (Prussia, Saxony, Hanover, Bavaria, etc.). The first line of Hoffman von Fallersleben’s poem, Deutschland, Deutschland über alles / Über alles in der Welt (Germany, Germany above all else, / Above all else in the world…) is a reminder that only a unified Germany can be invisible. In the second verse, 4 elements of German society will ‘inspire us to noble deeds’: German women, German loyalty, German wine, and German song. It’s nice to see music credited for bringing a country together.

However, the national anthem of Germany contains neither of these two verses. It is Hoffman von Fallersleben’s third verse that is currently being used as a Germany’s national anthem: Einigkeit und Recht und Freiheit / Für das deutsche Vaterland! (Unity and justice and freedom / For the German fatherland!). The verse is about how, working together, the country can enjoy unity and justice and freedom. They are the pledge of happiness.

The original first verse (Deutschland, Deutschland über alles) was used by the Germany government as the national anthem from 1922 to the end of WWII. After WWII, singing of the Das Lied der DeutschenI was banned as a symbol of Nazi Germany. Between 1949 and 1952, West Germany had no national Anthem. East Germany had its own anthem. The anthem, with its original first verse, was sung during the 1954 FIFA World Cup Final in Bern with Germany’s surprise victory and the song made its way back into the public ear. It was only in 1991, after German reunification, that the third stanza was codified as the official national anthem poem, to be sung to the music of Haydn.

Haydn: Das Lied der Deutschen (Tapiola Choir, Kari Ala-Pollanen, cond.)
Hoffman von Fallersleben intended for his poem, set to Haydn’s music, to be a drinking song (hence the references to women and song in the 2nd verse). It is only that uplifting third verse that has taken this poem to its greater audience.

Next: Italy and Spain