In Tune Society
Patriotism and Nationalism I: France and the UK
by Maureen Buja August 26th, 2016 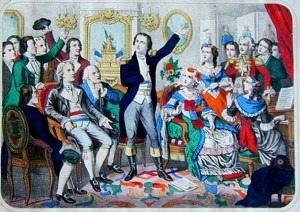 Rouget de Lisle, Composer of the Marseillaise, sings it for the first time, shown in a 19th century lithograph

Let’s start with some of the best known: France has La Marseillaise, written in 1795 by Claude Joseph Rouget de Lisle. The title translates to “The Song of Marseille” but originally had the title of “War Song for the Rhine Army.” The composer and poet, Rouget de Lisle wrote the words and music while in Strasbourg, under the impetus of the declaration of war by France against Austria. Its name is actually a nickname, given when the Marseilles volunteers marched to Paris. And, this also tells us that this is one of the anthems that is good for armies on the move: it’s written with a marching beat. The verse describes what the people should do: Arise!, and has general descriptions of the mayhem that will ensue should the enemy be victorious: your children and women will have their throats cut, the country will be returned to slavery and live life in chains. The Chorus calls the citizen to arms, to march forward and soak the fields of France with the enemy’s impure blood. There’s even a special verse for children to sing about how they will take up arms after their elders have died. It’s all rather bloody. It is a good example, however, of how a song can stir the patriotism of a country.

Rouget de Lisle: La Marseillaise (Tapiola Choir, Kari Ala-Pollanen, cond.)
It was used to particularly good effect in the movie Casablanca where, after the Germans have sung their army song (Die Wacht am Rhein), the exiled French resistance leader, played by Paul Henreid, overrides it, leading the patrons of Rick’s American Bar into a stirring rendition of La Marseillaise and gets the place closed down for his pains. This movie, made in 1942, was pushed onto the screen to take advantage of the recent Allied invasion of North Africa.

Some national anthems have words that change depending on who’s on the throne. The United Kingdom began with a national anthem of “God Save the King.” Ever since 1954, however, the song has been “God Save the Queen.” The origin of the melody is unknown, with a number of candidates from the 16th century all being possible. It wasn’t until 1744 that the first published edition appears. What’s interesting about the lyrics for this NA, as compared to France’s, is its appeal to a higher power. Whereas France’s NA is about the strength of the country and her citizens, the UK national anthem is an appeal to God to ‘save our gracious’ Queen, make her victorious, scatter her enemies, give her the choicest gifts. The official version we hear today was codified by King George V, in an order to the army in 1933 where he specified the tempo, dynamics and orchestration. The King considered himself an expert in the piece, considering the number of times he’d heard during his life.

Anonymous: God Save the Queen (Tapiola Choir, Kari Ala-Pollanen, cond.)
Next: The US and Germany