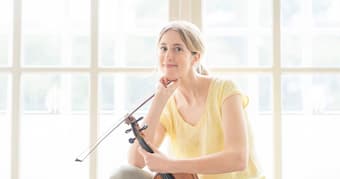 In 2012, violinist Vilde Frang was unanimously awarded the Credit Suisse Young Artist Award, and she made her debut with the Vienna Philharmonic under Bernard Haitink at the Lucerne Festival shortly thereafter. Born on 19 August 1986 in Norway, Frang made her debut with the Norwegian Radio Orchestra at the age of ten, and two years later attracted the attention of Mariss Jansons, when she was invited to perform the Sarasate Carmen Fantasy with the Oslo Philharmonic Orchestra. Frang grew up in a musical family and she recalls, “My father is a double bass player and my sister is also a double bass player. When I was little, I watched my sister play in youth orchestras and obviously I thought I’d be the next in line to be the double bass player in the family! It was a natural thing for me, but then my father came up with this argument: Our family had a Volkswagen, which was a small car. He said: Can you imagine when we go on holiday to be in the car with three double basses? We wouldn’t have a chance to fit the whole family in the car.” 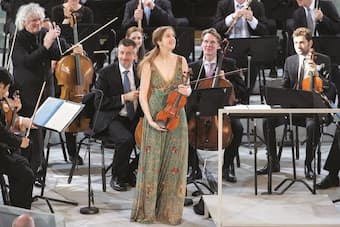 Frang continues, “So he made me a smaller instrument. It was made of cardboard and had no strings. So I could stick my Little Twin Star stickers and my Hello Kitty stickers on it. But the fact that it didn’t make any noise frustrated me a lot! I had to play it for almost a year before I finally got a living violin that also made noise.” She still remembers the moment she got a real violin, “I never practiced as inspired in my life as I did the first few days on this violin! I was in seventh heaven, I was so happy!” Frang began playing the violin by the Suzuki method at the age of four, and between 1993 and 2002 she studied with Stephan Barratt-Due, Alf Richard Kraggerud and Henning Kraggerud at the Barratt Due Institute of Music in Oslo. Frang played for Anne-Sophie Mutter for the first time at the age of eleven, and was subsequently a scholarship holder in the Anne-Sophie Mutter Foundation. Mutter became an important mentor, and Frang explains, “the most important thing was that Mutter encouraged me to trust myself, to follow my own instincts and my own voice. That is her top priority and her message that she wants to pass on, which I think is wonderful.” 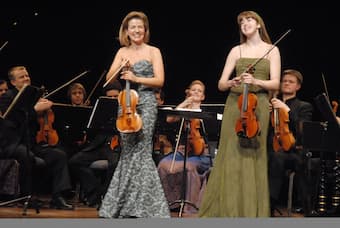 According to Frang, “Mutter more than any other musician is very focused on breaking down the work to get as close to the composer as possible. Some people might think that she plays very freely, but actually she has the most authentic and rigorous approach I know. I think that’s why she allows herself this freedom. The better you know the piece and the better you know the background, the freer you can be yourself.” Frang explains, “for example, if I play something by Debussy for her, she says: Let’s go to the Neue Pinakothek and look at the Monet exhibition and I’ll show you what I mean. She creates this connection between music and art, which has opened many doors for me. I always feel like she’s at least 200 years ahead of me and she’ll stay that way because she’s on a very special level. But as soon as we play together, we’re even.” The Mutter Foundation also placed a Vuillaume violin at Frang’s disposal. “I’ve been playing this violin for eight years now,” explains Frang. “Over the years she opened up more and more. She has the most wonderful voice! She’s not perfect; I’ve had some struggles, some arguments with this instrument over the years. But still I love her so much. She’s not perfect, but she’s like me: I’m not perfect either. I think we’ve improved each other a lot over the years.” More recently, Frang has been playing the 1734 “Rode” Guarnerius, on generous loan by a European benefactor. 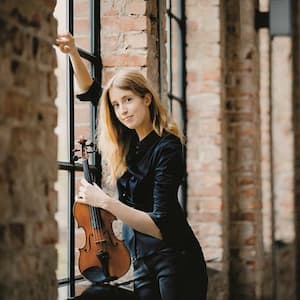 Between 2003 and 2009 Frang continued her study in Germany, with Kolja Blacher at the Hochschule für Music and Theater Hamburg and Ana Chumachenco at the Kronberg Academy. A recipient of the 2007 Borletti-Buitoni Trust Fellowship, Frang also took lessons with Mitsuko Uchida in London. However, it has not always been smooth sailing, as her efforts were repeatedly met with skepticism. “Life in Scandinavia is very comfortable. People have money and they rarely have to fight for anything. The first question is often: Are your parents putting pressure on you? This is very important for Scandinavians: you must not be forced, you must not force yourself, you must not have to overcome yourself. But art is about pushing your limits, about fighting. Otherwise you have nothing to give.” However, “playing the violin was the only thing I never really thought about,” says the Norwegian, “it’s just part of my life, not a job.” Frang also envisions encounters with other art forms, as she would love to work with dancers, choreographers, photographers and directors. “Just me and the violin case for the rest of my life—that’s not enough. I hope that with my violin I can build a bridge to other art forms that I would like to get to know better. I want to be part of an artistic concept.” True to her vision, Frang is artistic board member of the Oslo Chamber Music Festival since 2020, and an exclusive Warner Classics artist.