Ming Tsao: If ears were all that were needed

Los caprichos, by Francisco Goya, are a series of 80 prints done in aquatint and etching created in 1797 and 1798. The series illustrates the world follies, as represented in contemporary Spanish society. He aims at many targets: ‘predominance of superstition, the ignorance and inabilities of the various members of the ruling class, pedagogical shortcomings, the church, marital mistakes, and the decline of rationality.’

The style of the images is informal, despite the seriousness of his subject, and Goya added brief comments and explanations to each image. The title of the series, Los Caprichos does not refer to light-hearted caprices, but rather are ‘emphatic caprices’ – serious and deadly in their bite.

In this image, a monkey takes up the guitar to serenade a donkey, who is, literally, all ears. But what does the untutored monkey play on his guitar? What does the monkey hear? And what is the man applauding – the music or the fact that the monkey is playing at all? 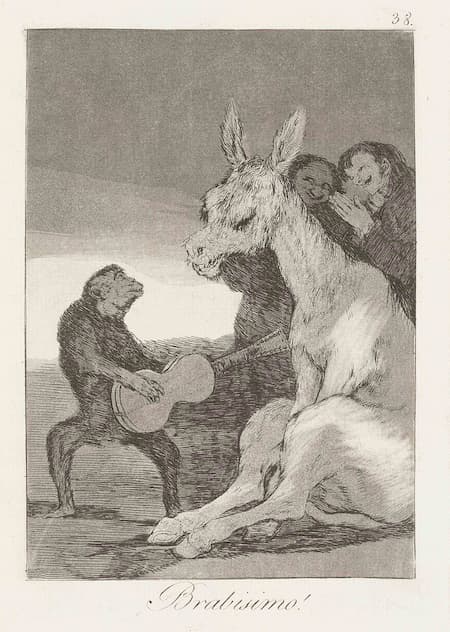 For Capricho No. 38, Bravissimo, Goya added these lines: ‘If ears were all that was needed to appreciate it, no one could listen more intelligently; but it is feared that he is applauding what is soundless.’

The title, Bravissimo, is the call the audience makes at a performance that is outstanding. The superlative suffix ‘-issimo’, when added to ‘bravo’ adds the qualities of extremely or remarkably. Here, Goya uses the word sarcastically, criticizing those who falsely claim to be outstanding in their performances. The monkey can only imitate human actions while the donkey is unaware and deaf to the artistic qualities of the monkey’s performance. The human behind, shown clapping, is classed as yet another dumb animal.

American composer Ming Tsao (b. 1966) said that his strongest association with the guitar comes from handling old instruments and hearing the untuned open strings. 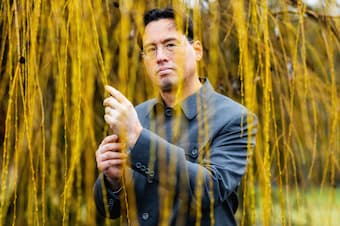 The sound of the strummed strings tells him immediately what he needs to know about an instrument, its make, its size, the size of its strings, etc. In his work for guitar, If ears were all that were needed, taking his title from Goya, he writes for what sounds like an old instrument that someone just picked up. The music ‘consists primarily of strumming the open strings and hearing strange fragments of folk melodies, which I associate with the tradition of the guitar, emerge from the resonances of the sound, often through the use of attackless harmonics,’ says the composer. His reference to the Goya print is a way of ‘applauding a virtual “song” implied by the brief tonal fragments heard only through a guitar’s sound disappearing.’

Ming Tsao: If ears were all that were needed (Seth Josel, guitar)


In an unexpected way, Tsao plays with the implied sounds of Goya’s work – can noise be music?