Rudolf Buchbinder has been described as “the greatest natural pianist talent,” a performer “whose interpretations flow from a unique fusion of spiritual insight and intellectual rigour.” In fact, the critic Joachim Kaiser praised Buchbinder’s “innate ability to reveal fresh ideas and mine rich seams of expression in the moment of performance.” Buchbinder does play with expressive spontaneity and technical control, and he has been tirelessly studying the masterworks of piano literature. His interpretations are based on meticulous study of source materials, and as an avid collector of historic scores, he owns 39 complete editions of Beethoven’s piano sonatas. 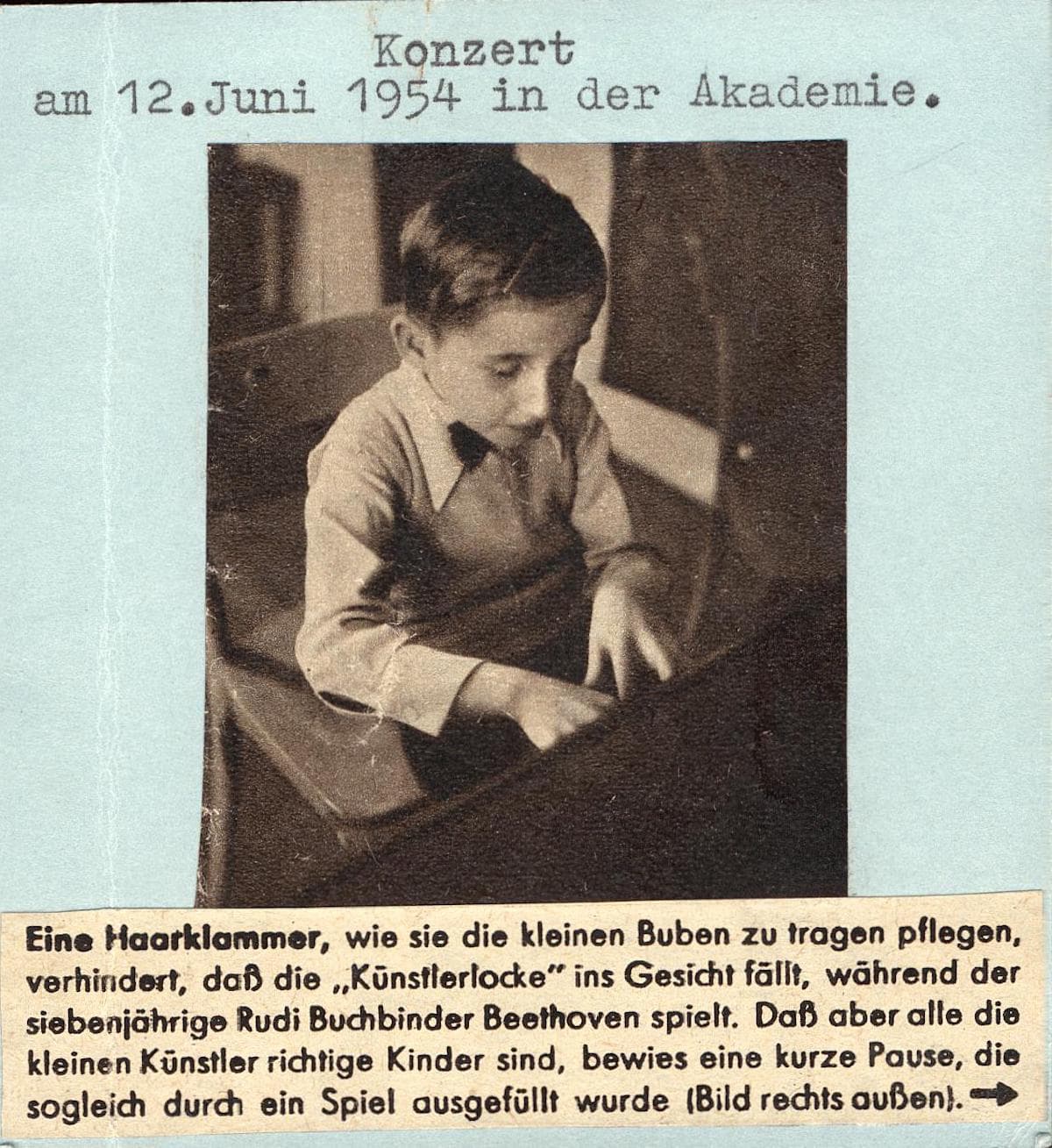 The young Rudolf Buchbinder in 1954

Buchbinder once met Friedrich Gulda in Munich, and when Gulda asked where he was going, Buchbinder answered truthfully, “to the concert hall for my Beethoven cycle.” Gulda then asked him, “Tell me, aren’t you tired of Beethoven yet?” To Buchbinder that question was completely incomprehensible, as he always discovers something new in such masterpieces. “Even pieces that I have performed hundreds of times,” Buchbinder writes, “never lose their freshness to me.”

Most biographies classify Rudolf Buchbinder as a Czech-Austrian pianist. Buchbinder considers himself a genuine Viennese, who has always lived in Vienna. His birth certificate, however, puts his birthplace in the Bohemian town of Leitmeritz (Litomeřice), north of Prague. Born on 1 December 1946, Buchbinder’s place of birth was pure coincidence. His mother was a Viennese native, but her first, deceased husband had been from Litomerice, and she was only briefly in town to take care of some important paperwork. 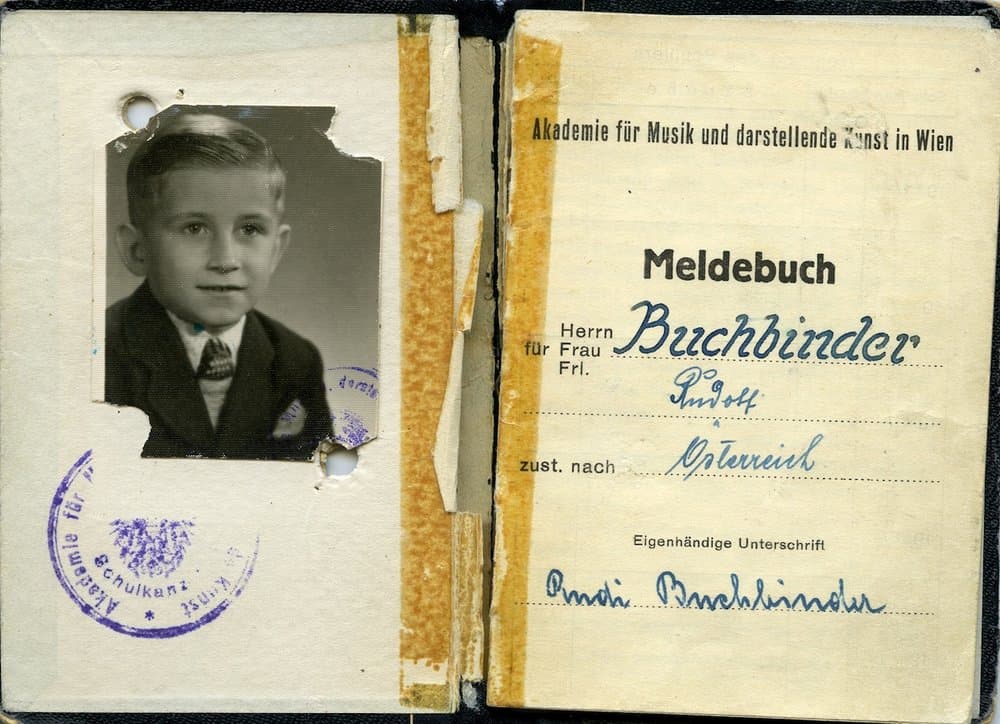 As Buchbinder writes, “I was obviously in a hurry to be born and didn’t want to wait until she was back home in Vienna.” As such, Buchbinder’s stay in Litomerice only lasted a couple of weeks, “just long enough for my mother to be able to travel back to Vienna with the newborn.” At the time of his birth, his mother’s second husband, the pianist’s father, had already tragically died in a motorcycle accident. Widowed twice at a young age, his mother was a single parent, and at the same time, she had to deal with the “horrendous general situation so shortly after the Second World War.”

The family, consisting of Buchbinder’s maternal grandmother, his mother, and his half-brother Klaus lived in a tiny apartment in the 7th district of Vienna. Buchbinder remembers, “In addition to the essentials, a few pieces of furniture such as a table, armchairs and a bed, there was surprisingly also a piano in the room. As is usual in upper-class households, it even had a Beethoven bust enthroned on it! Don’t ask me why and how these objects just ended up in our apartment.” 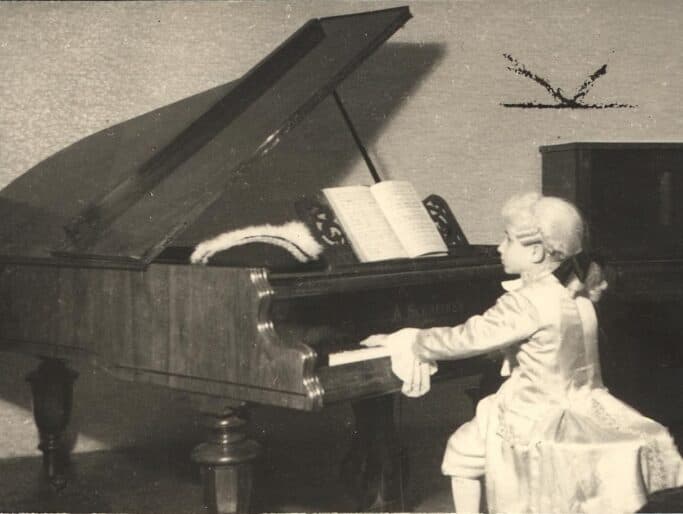 Actually, the piano had been a gift from Rudolf’s uncle, the husband of his mother’s sister. He was a chief inspector in the police force, and a “very strict and conscientious official.” However, he loved music and had mastered several instruments, including the zither, guitar, and the piano. Buchbinder remembered, “that his performances were not of classical music, but that he enjoyed playing folk and popular “Heurigen” music from Vienna.” Buchbinder emphatically states, “I owe it to him alone that my musical talent was recognized and encouraged.”

Uncle Rudi had already given piano lessons to Rudolf’s brother Klaus, and Rudolf reports, “When I was still too young for piano lessons, he noticed that as soon as I reached the keyboard, I pounded on it passionately. I was fascinated by the piano even as a small child. I tried to immediately replay everything I heard on the radio. It was mainly hits, no classical music! But this magnetic effect that the piano exerted on me gave my uncle no rest.” It was Uncle Rudi who found an advertisement in a Viennese daily newspaper that the Vienna Music Academy was looking for young talent. 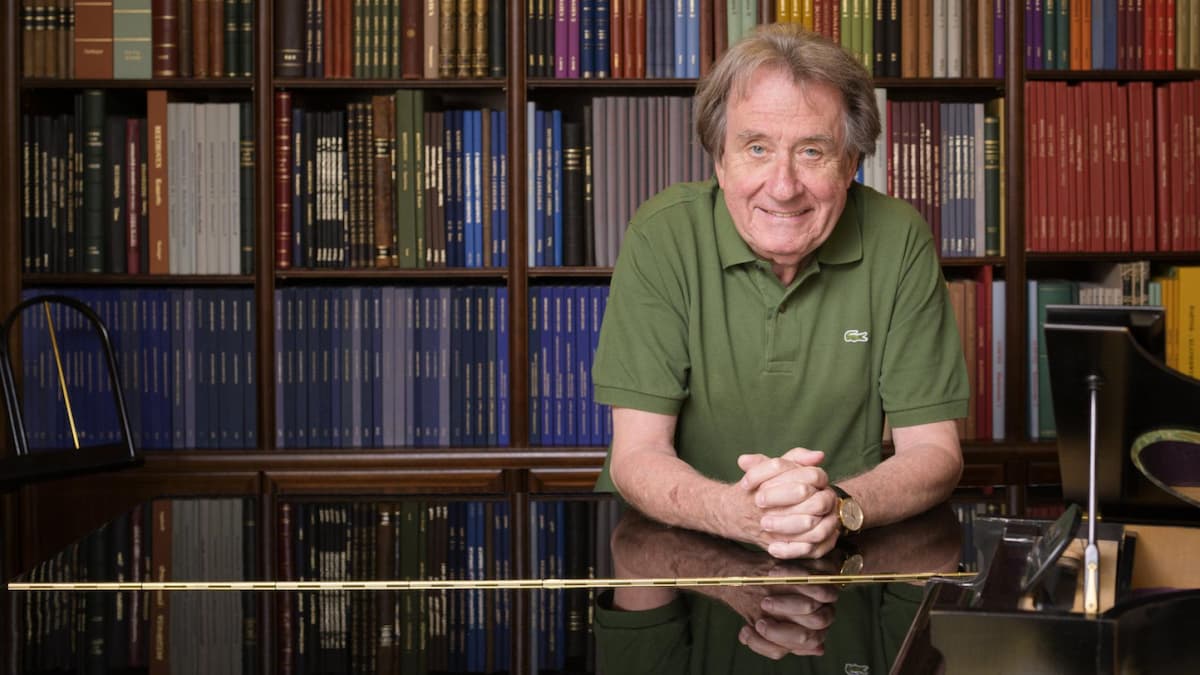 “He took me to the entrance exam, and I played two hits that I knew from the radio. My mother had to sign for me in the enrollment book of the music academy because I was a pre-school child in 1952 and could not sign properly. Even if I taught myself to read and write at home, I couldn’t read music at all back then. Despite this, at the age of five, I was accepted as the youngest student at the music academy.” Uncle Rudi accompanied young Rudolf to piano lessons, and he also oversaw his practice at home. According to Buchbinder, “he had a bizarre method, as he told me to play with my hand round enough to fit an apple. He sat next to me with a stick in his hand, and the moment I flattened my fingers I got a painful stroke with the stick.” Bizarre method none withstanding, Buchbinder was admitted to Bruno Seidlhofer’s master class alongside Nelson Freire and Martha Argerich in 1958.