“I’ve always listened to my own voice. I was discontented with the kind of music that everyone said I should write – all clever and dissonant, intellectualised. I wanted to write music that was deeply felt, music that would move people.” – Alan Hovhaness

A prolific composer and a “holy minimalist” long before the term was even coined, a strong thread of mysticism runs through Alan Hovhaness’ music. Following early criticism of his work by Leonard Bernstein and Aaron Copland, Hovhaness turned away from the fashionable compositional genres of the time and sought a more personal musical language and mode of expression. He travelled widely, to India, Japan and Korea, and studied the music of Armenia (his father’s homeland), and the musical philosophy and idioms of these countries infuse his own music. 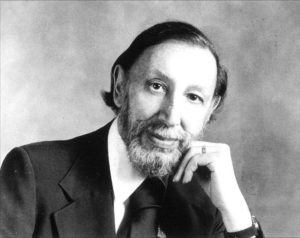 Born Alan Vaness Chakmakjian in Somerville, Massachusetts, he began to use his paternal grandfather’s surname “Hovaness” after his mother’s death in 1930, stating that the desire to change his name was because no one pronounced his original surname correctly, but he was also keen to remove the Armenian connection and changed his surname to an Americanized version of his middle name. He later re-established his Armenian ties and changed his surname to “Hovhaness”, with an emphasis on the second syllable.

He displayed a precocious interest in music and was composing from an early age, and, while having piano lessons as a child, he established himself as a composer at the age of 14. He studied at the New England Conservatory of Music, winning the Samuel Endicott prize for composition. During the 1930s and 40s he destroyed a lot of his music, citing the composer Roger Sessions’ criticism of his music and a need to make a fresh start in his compositional life.

I propose to create a heroic, monumental style of composition simple enough to inspire all people, completely free from fads, artificial mannerisms and false sophistications, direct, forceful, sincere, always original but never unnatural. Music must be freed from decadence and stagnation. – Alan Hovhaness 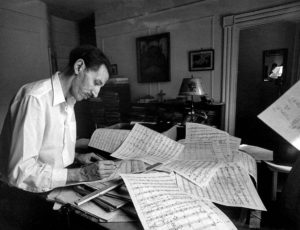 His best-known work, Symphony No. 2 (‘Mysterious Mountain’) written in 1955, demonstrates the other significant interest in Hovhaness’s life: spirituality. While some of his works have explicitly religious themes, his music also explores the connection between the environment and the human spirit. ‘And God Created Great Whales’ (1970) includes pre-recorded humpback whale sounds, while his Symphony No. 50 (1983) culminates in a graphic musical depiction of the eruption of Mount Saint Helens volcano in May 1980.

Hovhaness was an unashamed lover of melody, composing at a time when dissonant atonality was all the rage, and his music has a pleasing consonance. With an elegant simplicity drawn from Medieval and early Baroque music, Indian ragas, gagaku (music of the Japanese court) and Korean percussion and strings, allied with a strong sense of spirituality, hushed meditative serenity, exoticism and nostalgia, his music accessible to performers and listeners alike.