Composers Inspiration
The Explosion to End the World
by Maureen Buja May 19th, 2016 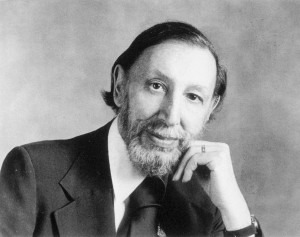 One of the most prolific of modern composers, the American composer Alan Hovhaness (1911-2000) seems to figure rarely on the modern concert stage. He wrote some 70 symphonies, and his surviving works number over 500 pieces.

His style of music seems very much tied in with atmosphere – one critic summarized it as ‘hushed, reverential, mystical…’ and so we hear that in the opening of this remarkable work. Hovhaness’ Symphony No. 50 was written in 1982 as a commission from the publisher C.F. Peters. It is in homage to the volcano Mt. Saint Helens, which suffered a cataclysmic eruption on 18 May 1980. 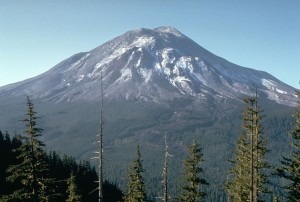 Mt. Saint Helens the day before the eruption

Hovhaness lived in Seattle, Washington, at the time and heard the sonic boom that signalled the start of the eruption. Ash from the volcano did not fall on his house until a week later, by which time it had travelled completely around the world to return home.

The first movement, Andante, sets up the mystical and hushed view of the Mt. Saint Helens and the surrounding Cascade Mountains.

Hovhaness: Symphony No. 50, Op. 360, “Mount St. Helens”: I. Andante (Seattle Symphony Orchestra; Gerard Schwarz, cond.)
In the second movement, Spirit Lake (Allegro), we start to hear some of the Asian influences often found in Hovhaness’ music. The strings seem to be following the model of pizzicato from the music of Sibelius, while the woodwinds pluck lonely melodies from the air. 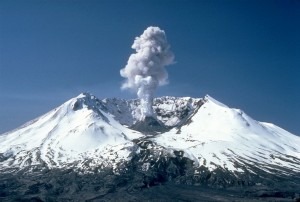 Spirit Lake had been a popular camping site to the north of Mt. Saint Helens. After the volcano, the lake became highly toxic from volcanic gas and it was predicted that the lake was dead. By 1983, however, life began to return and the lake now has been restocked with fish.

The last movement begins with momentous chords, preparing us for something to come. And come it does at 1:48, with a rolling shock that builds and builds. We hear the thunder and lighting, the pyroclastic flows, and the shockwaves of earthquakes that shook the earth. Our melodies turn very pentatonic, driving over an incessant roar from the timpani and gong. We end with a triumphant statement, still over that roaring timpani, however. 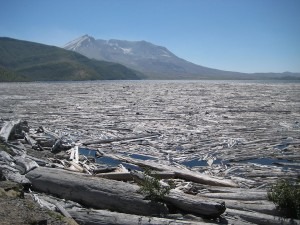 Hovhaness: Symphony No. 50, Op. 360, “Mount St. Helens”: III. Volcano (Adagio – Allegro) (Seattle Symphony Orchestra; Gerard Schwarz, cond.)
All in all, it’s an extraordinary work commemorating the worst volcano on the American continent. All of man’s works stand as nothing when nature in the form of a volcano can destroy it all in a flash and boom.