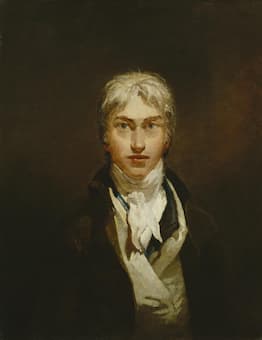 In an extraordinary work that is not only based on a number of paintings by JMW Turner (1775–1851) but also uses a particular thematic point to connect them, Scottish composer Thea Musgrave (b. 1928) creates a world of change and sometimes horror. Her 2003 orchestral suite Turbulent Landscapes takes as its subjects the sea monsters and shipwrecks, destroyed careers and destroyed institutions, and dangerous seascapes and deceptively calm landscapes that Turner depicted in his paintings.

We begin with sunrise, but as depicted in an unfinished painting that bears the title of Sunrise with Sea Monsters. 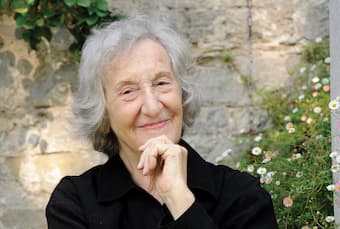 The title of the work was assigned later and it is more probably that instead of a sea monster, the pink shape is more probably just a couple of fish; to the left of the central figure (be it monster or fish) can be seen part of a fishing net and a red and white float. Turner was one of the greatest painters of the sun, even when it was invisible behind the morning fog, and with his play of white and yellow, he lets us know exactly where the sun is rising with its golden glow. 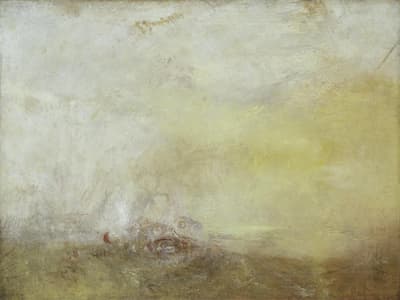 In her work, Musgrave has the sea monster arrive to the sound of the tuba. The calm morning is interrupted by its play, the sun rises to the sound of trumpet, and the monster swims off to frighten someone else.


The second movement, The Shipwreck, is based on 3 different Turner paintings, a kind of before – during – and after the turbulent event of a shipwreck.

In 1831, Turner visited the island of Staffa in the Inner Hebrides to see the famous Fingal’s Cave, and wrote that a storm blew up as they were returning and described ‘the sun getting towards the horizon, burst through the raincloud, angry.’

In The Shipwreck, which was first exhibited in 1805, sailors and passengers from a number of ships are fighting desperately against the inexorable forces of nature. The skies are dark and the seas darker.

After the shipwreck, all evidence of man’s mastery of the sea is missing, just a lonely dog, howling for that which was lost. In this small watercolour, Turner has captured so much of the feeling of loss and desolation after a calamitous event. 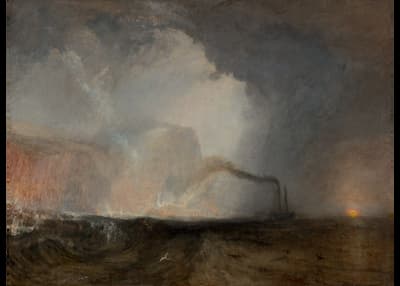 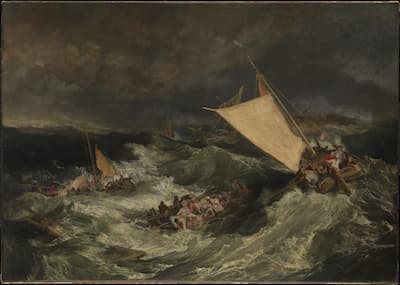 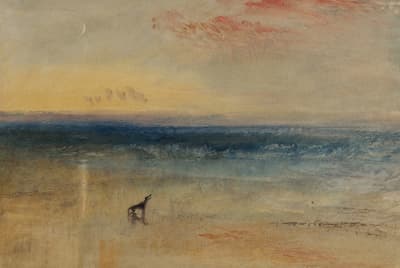 In her movement, The Shipwreck, Musgrave gives us a bit of Mendelssohn’s overture The Hebrides, which commemorated his own trip to the cave the year before Turner. Both Turner’s and Mendelssohn’s works made their debuts in 1832, although Turner’s work had the better reception. As the work builds toward the wreck, she writes the crashing of the waves into her music, reaching a point of silence in the middle as everything sinks down into the water – the ship is lost. An echo of the Die irae from the Requiem mass tells us everyone’s fate.


One of the most celebrated military events of the Second Punic War is still remembered today, more than 20 centuries after its occurrence in 218 BC. Hannibal’s crossing of the Alps remains one of the most famous military events of its day. In Turner’s painting, the sun glimmers darkly through the snow clouds that are preparing to hurl themselves down onto Hannibal’s army, who are nearly hidden at the bottom of the painting. Hannibal’s quest across the Alps was successful, despite the snowstorm, leading to the catastrophic defeat of the Roman army at Cannae in 216 BC, leaving almost the whole of Italy in Hannibal’s hands. 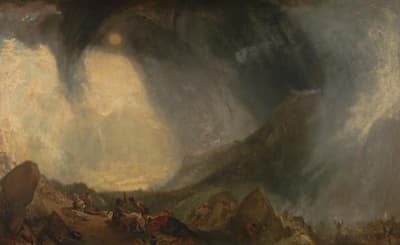 In her music, Musgrave gives the role of Hannibal to the solo horn, while his army is formed by the strings. The approaching storm is in the flute and percussion. As the army advances up the Alps, the going gets slower and the snow increases, until at the end, the sun of Italy is seen in the distance.


The next movement chooses a picture that is based on a prisoner and the nature that surrounds him. An elongated Napoleon is shown regarding a rock limpet in a pool of water. His guard stands watch behind him and in the far background, the sun sinks into a red horizon. Napoleon here is on his final exile island of St Helena, where he had been sent after his defeat in 1815 at Waterloo. The limpet in the water has the freedom and liberty that he, also reflected in the water, is denied. Napoleon died in 1821 and his ashes were returned to France in 1840 when this picture was painted. Napoleon isn’t shown in either a heroic or a disgraced state, but rather as symbolic of the futility of war. Turner described the sunset as a ‘sea of blood.’ 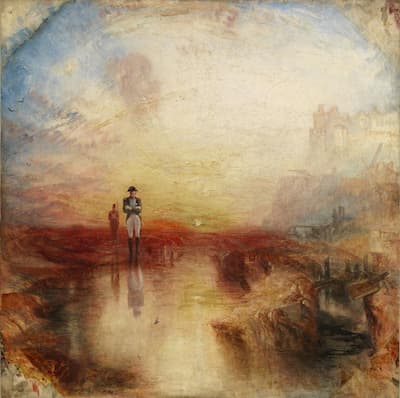 Napoleon, the solo trumpet, encounters the rock limpet (a muted chord in the horns that doesn’t change pitch), and thinks back on his life. Like Hannibal, he had a successful crossing of the Alps, and to cue this, Musgrave includes a distinctive phrase from La Marseillaise, this was followed in 1812 by his disastrous attack on Russia and retreat from Moscow. The British National Anthem is used to symbolize his defeat by the British – not only at the Battle of Trafalgar but also at Waterloo. It’s a work of memory and pain, retrospection and regret.


In 1834, the Palace of Westminster went up in flames, when a chimney fire led to the destruction of the majority of the palace. A low tide in the Thames restricted the firefighters’ ability to fight the flames. The fire was the largest in London after the Great Fire of 1666. Turner made three paintings of the event, one from the middle of the crowd that gathered to watch in Old Palace Yard, another from the south bank, with the Westminster Bridge shown in an odd perspective, and a third from further down river. One writer compared the Philadelphia painting to being ‘like Romantic opera, with elaborate scenery and full chorus of horrified spectators’ while the Cleveland painting, with its exaggerated flames and the reflection of those flames in the water providing a more subtle statement with the contrasts of reds and oranges with the blue of the sky and the river. 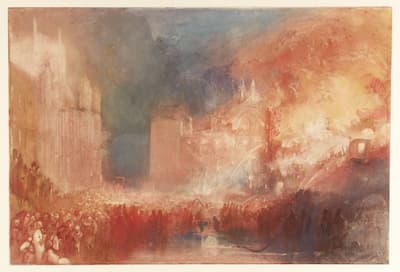 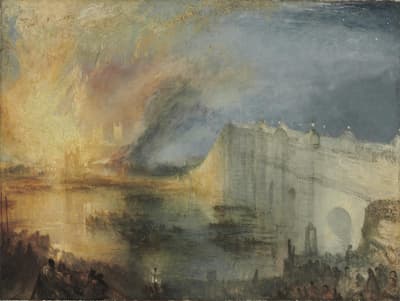 Turner: The Burning of the Houses of Lords and Commons, 1834 (The Philadelphia Museum) 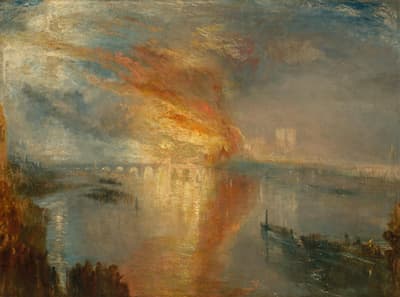 Turner: The Burning of the Houses of Lords and Commons, 1834 (Museum of Art, Cleveland, Ohio)


We end as we started, with another unfinished sunrise. No sea monsters this time but a boat on the water between two headlands. It is thought that the painting is either Lake Lucerne from Brunnen or a section of the Rhine river. The work is interesting because it was painted at the end of his life when he was increasingly painting pictures of disasters (see above). This is a return to the idyllic, or at least looks like a return to the idyllic if he didn’t paint another disaster over the top. 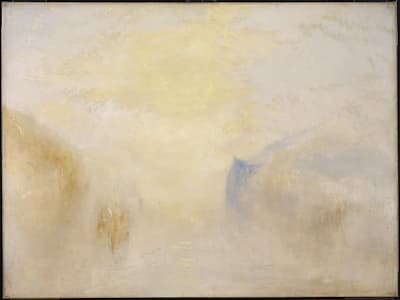 A big string cluster is the fog, the brass is the looming cliffs, and two horns become the fog horns. In her work, Musgrave goes on to finish Turner’s beginning: ‘A lonely clarinet summons the morning sun which eventually appears (trumpets and woodwinds) and the fog evaporates. The ship is now fully revealed (strings) and sails between the cliffs (brass now unmuted) towards the open sea. The mood is tranquil as the ship disappears into the distance. There is a brief reminiscence of the sea monster.’


In these six works, which Musgrave says can be performed as separate pieces or in this orchestral suite, she’s captured the layered effect of a Turner painting. Each separate movement uses a solo instrument as the protagonist in order to heighten the drama, with the rest of the orchestra left to colour in the edges, providing the clouds and the shadows and the light that is essential to any Turner painting.