In 1498, in response to the announcement of the end of the world that the European Christian world believed would happen in 1500, the 27-year-old Albrecht Dürer (1471-1528) completed his sixteen designs for the Apokalyse (Apocalypse). 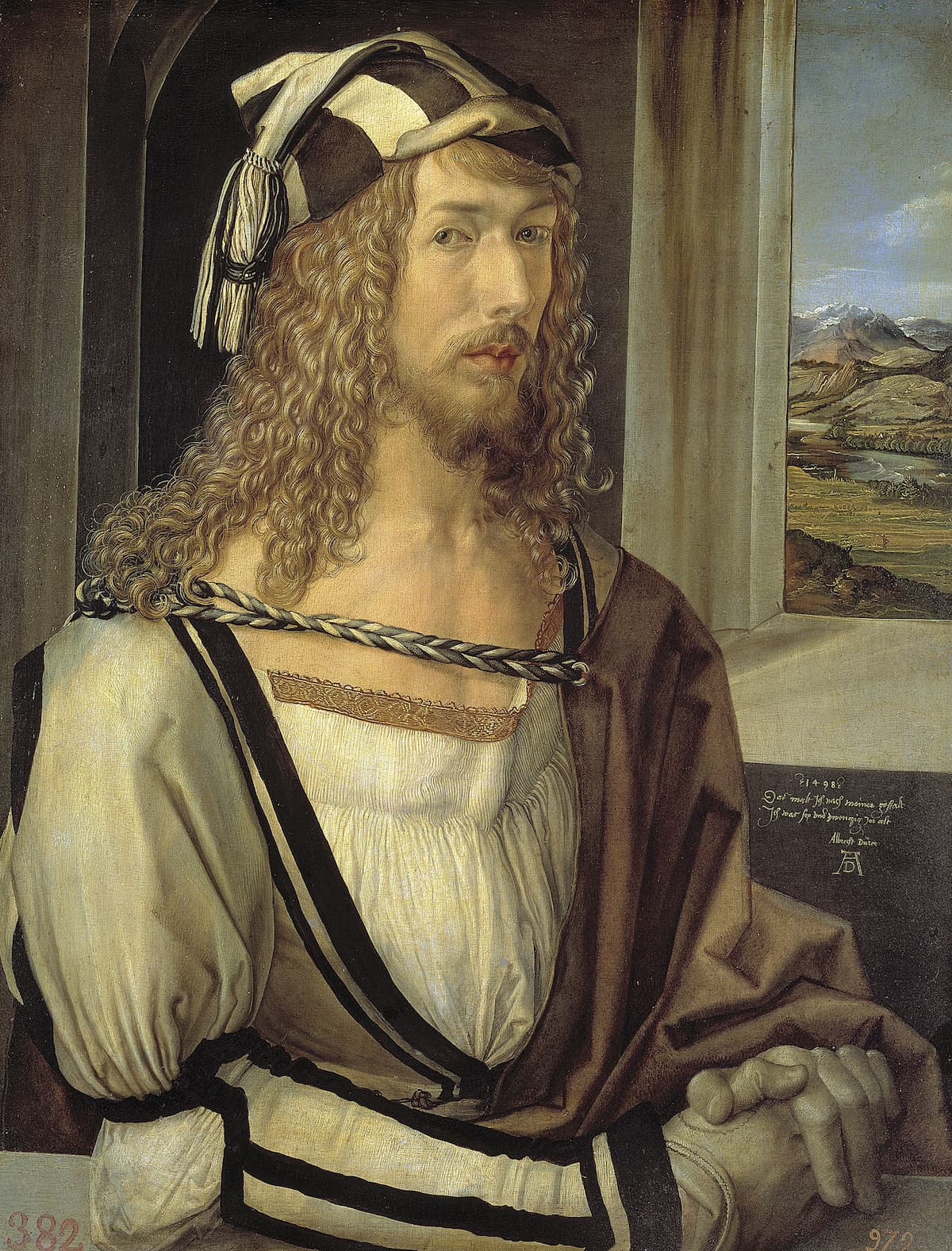 Dürer was born in Nurnberg, the third of his parent’s 18 children, His father was a successful goldsmith and his godfather, Anton Koberger, was one of the most successful publishers in Germany, responsible for the Nuremberg Chronicle (1493) that the young Dürer may have worked on.

Although his father wanted him to apprentice with him as a goldsmith, his skills as an artist were recognized while he was still in his early teens and he apprenticed to Michel Wolgemut, the leading artist in Nuremberg, at age 15. After he completed his apprenticeship in 1490, he set off on his traditional Wanderjahre, to learn skills from artists elsewhere. In his 4-year ‘gap year’, Dürer travelled around Northern Europe, working with engravers in Colmar, Frankfurt, The Netherlands, Strasbourg, and Basel before returning to Nuremberg to be married. He next travelled to Italy, visiting Venice, Padua, and Mantua, and learning about new engraving techniques and new art styles.

Upon returning to Nuremberg in 1495, he immediately showed his Italian influence by creating larger and more finely cut prints than were normally seen in Germany. The 1498 series on the Apocalypse was based on scenes from The Book of Revelation, which forms the final book of the Christian Bible. In the book, a prophet named John describes a series of prophetic visions that include figures such as the Seven-Headed Dragon, the Serpent, and the Beast. The latter rises ‘up out of the sea, having seven heads and ten horns, and upon his horns ten crowns’.

The book was published with an image on one side of a page and text from Revelation printed on the other side. The text was printed by Anton Koberger. The woodcuts for the images would have been created by Dürer on paper. The paper would have been placed face-down on a block of wood and the block cutter (formschneider) would have carved away the wood not needed in the image, leaving a flat surface that would carry ink and would print on the page. Dürer’s original art was destroyed in the carving process.

The book begins with a cover image of Mary appearing to St. John. Here she’s shown as the Woman with the Moon. This image was added to the original 15 for the 1511 edition. 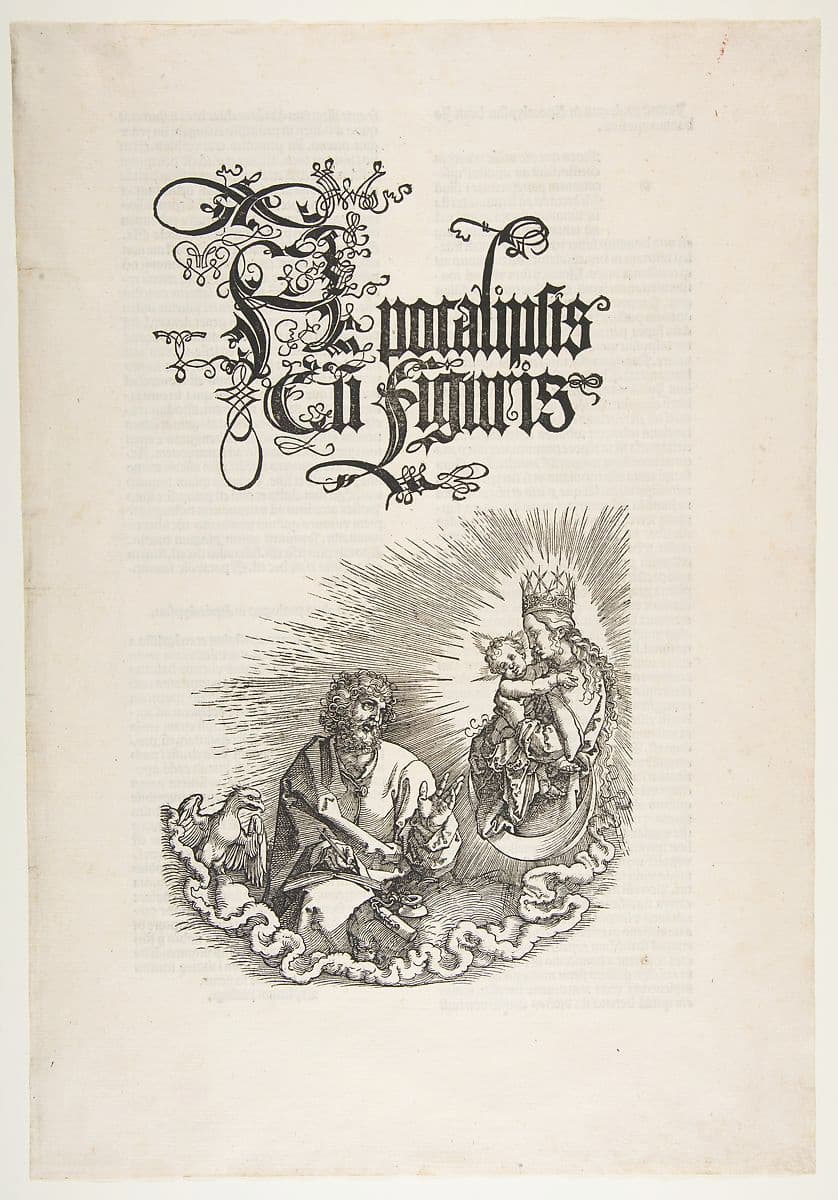 First in the book proper is The martyrdom of St John, shown in a pot of boiling oil while more oil is poured on him from above. 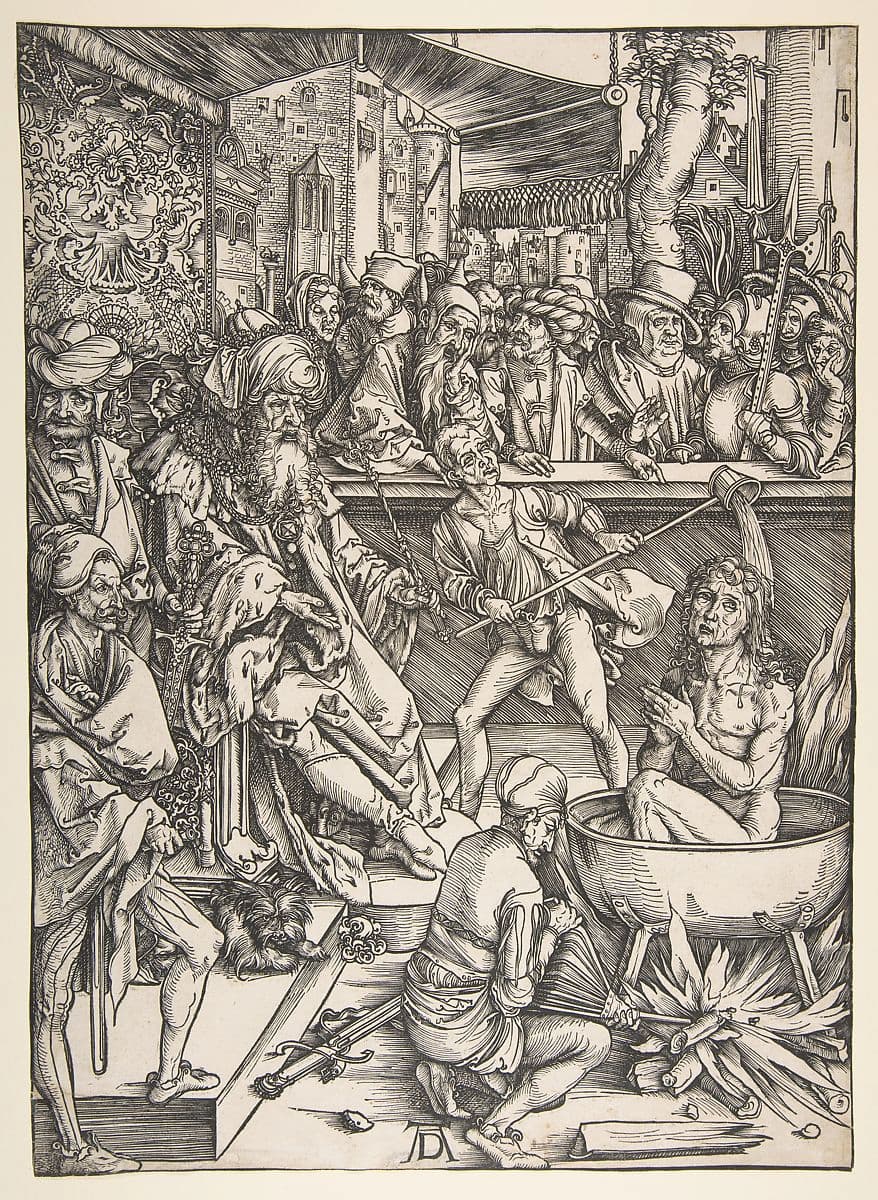 St John’s vision of the seven candlesticks comes from Revelation 1/11. 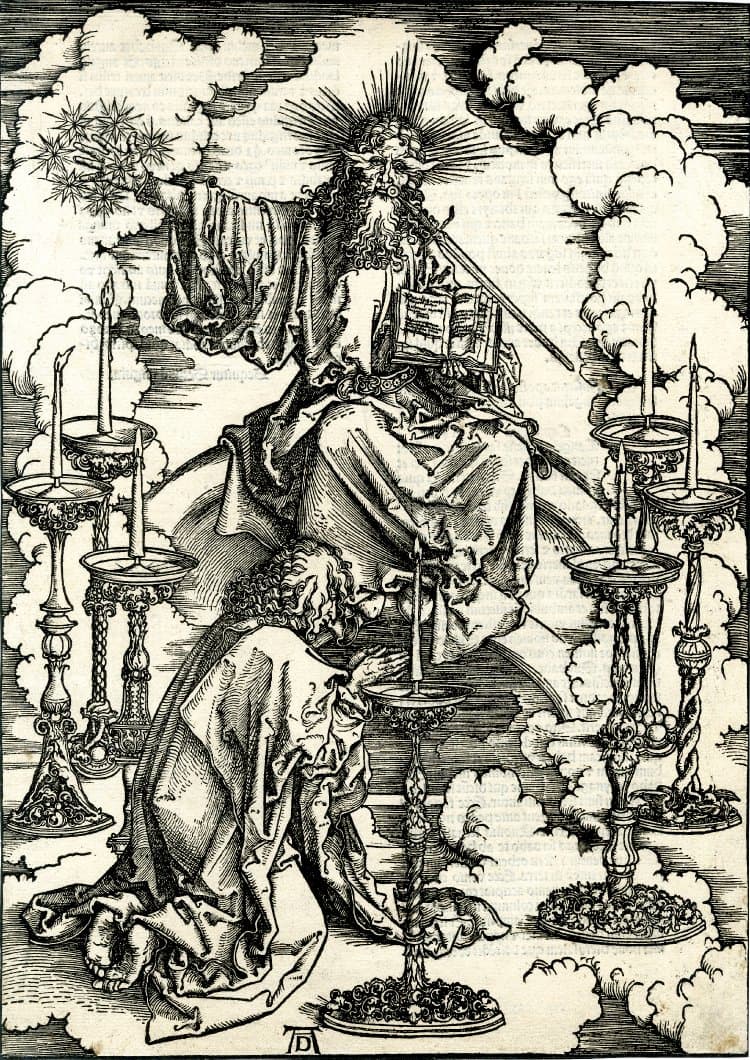 St John kneeling before Christ and the twenty-four elders comes from Revelation 4/4. 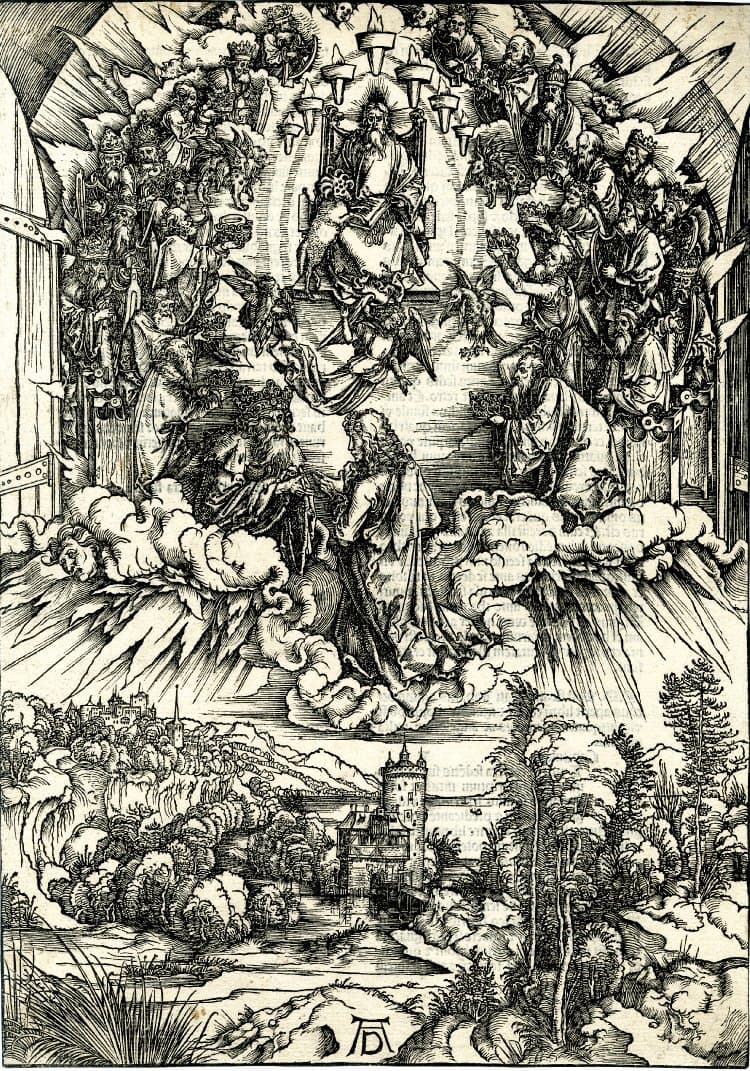 One of the most famous of the Dürer prints from this collection is the image of The four horsemen of the Apocalypse (Revelation 6:1-8). Although in the original text, each horse is a distinctive colour: White, Red, Black, Pale, Dürer, working only in black and white with grey differentiates the riders by the attributes that they carry: Death has a trident, Famine carries a balance, War has a sword, and Plague carries a bow. Up to this point, most depictions of the four horsemen were rather staid, Dürer, however, injects motion and a dangerous intent into the image. The horses overlap and the eye is carried upward through the image to the bright upper right corner. Along the bottom, everyone is trampled, starting with the crowned figure in the bottom left corner who is being eaten by a dragon. 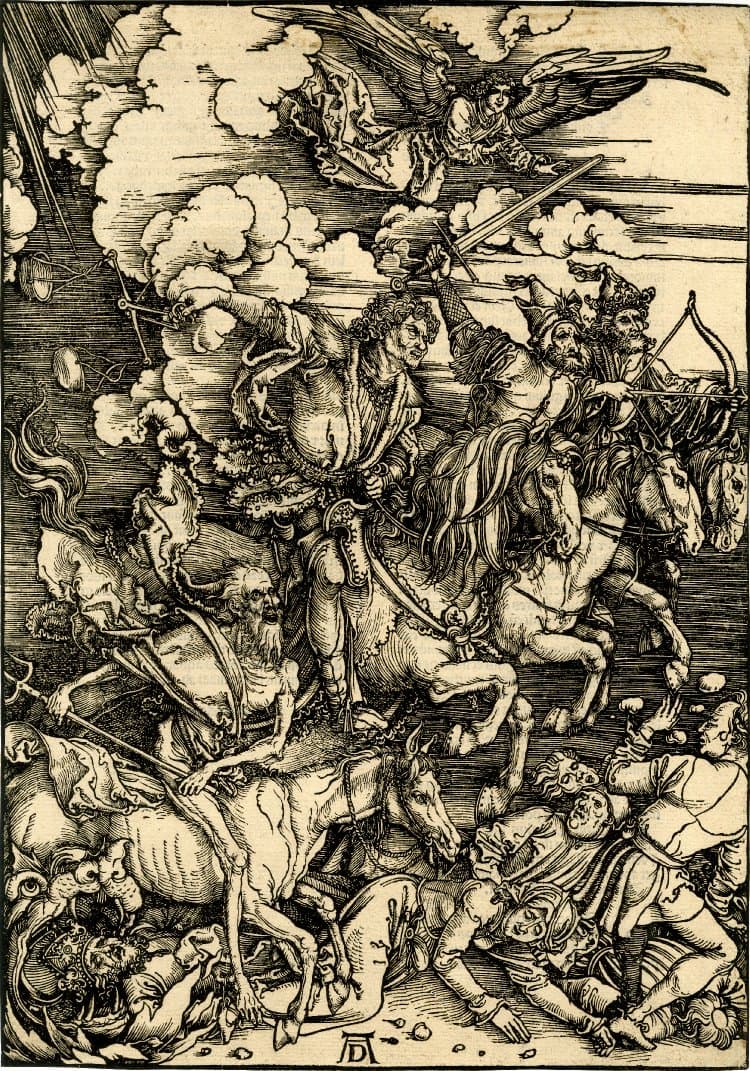 The four horsemen were the first four seals. The next image, The opening of the fifth and sixth seals (Revelation 6:9-17), brings the altar where those who were killed for their religious beliefs call for justice, and with the opening of the sixth seal, a great earthquake and the stars falling to earth. 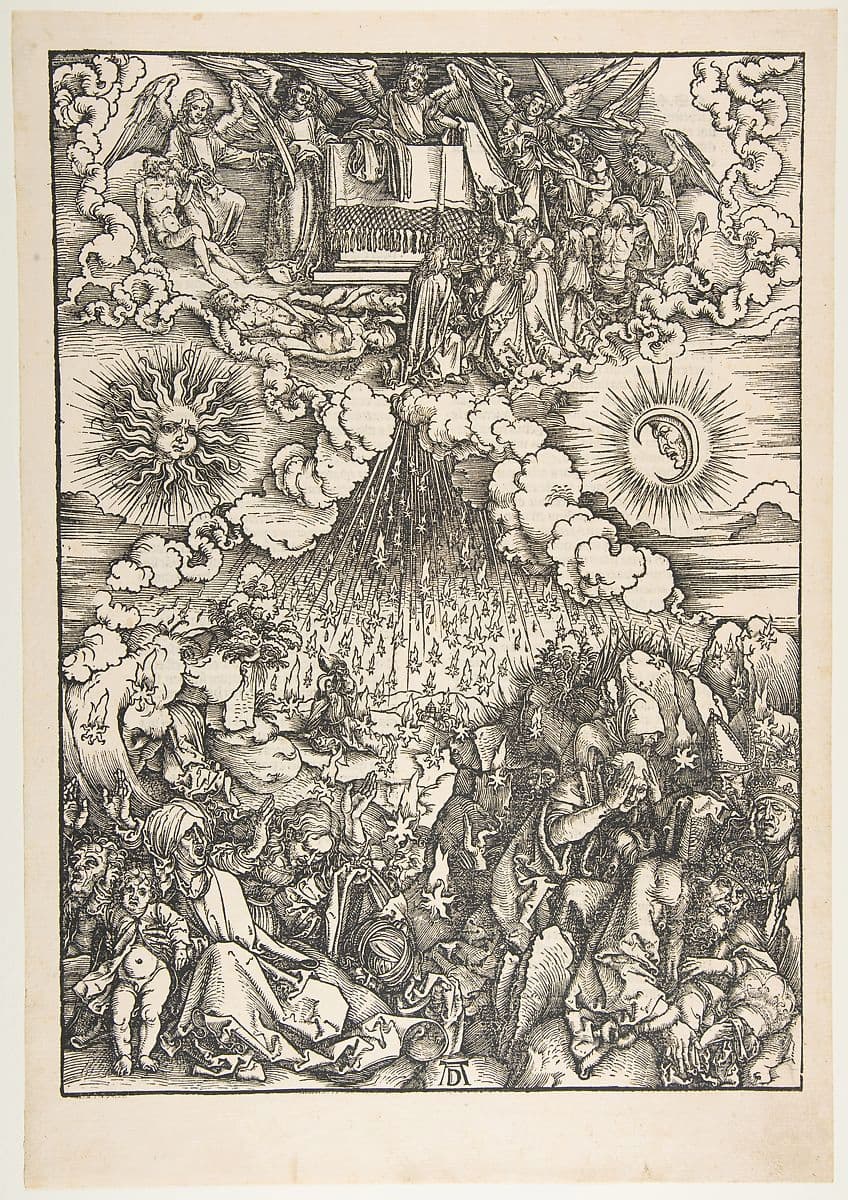 Angels hold back the four winds while the elect are marked as the servants of God (Revelation 7:1-13) 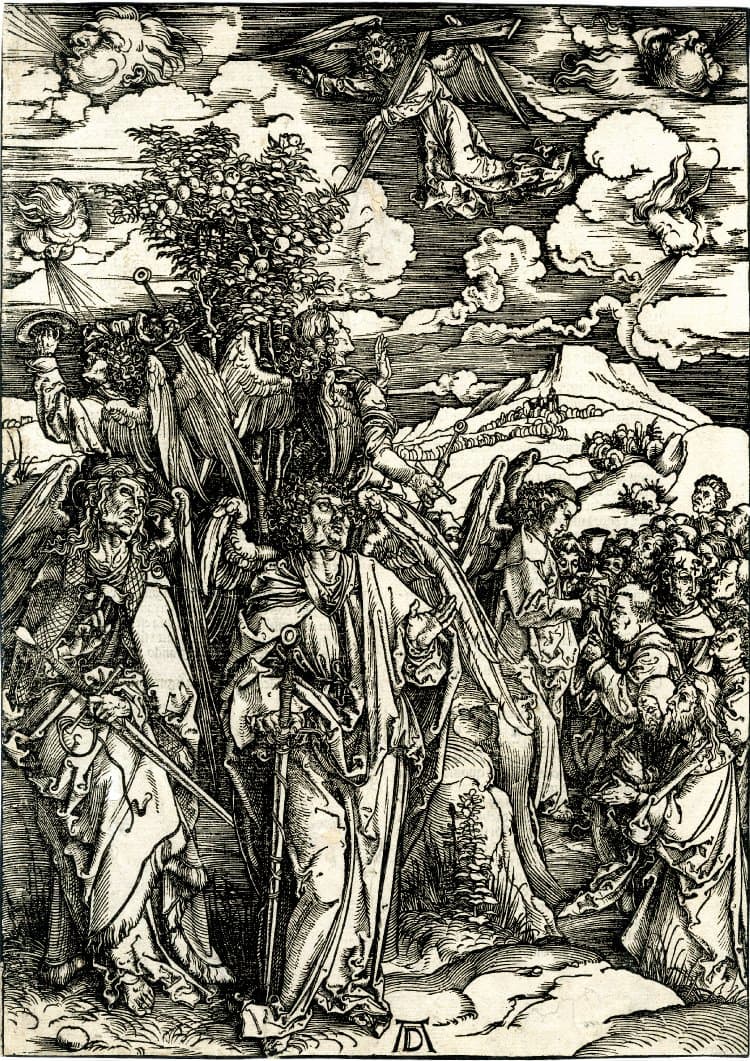 Next follows The hymn in adoration of the lamb sung by those who, clothed in white, are brought to salvation by the lamb (Revelation 7:13-17) 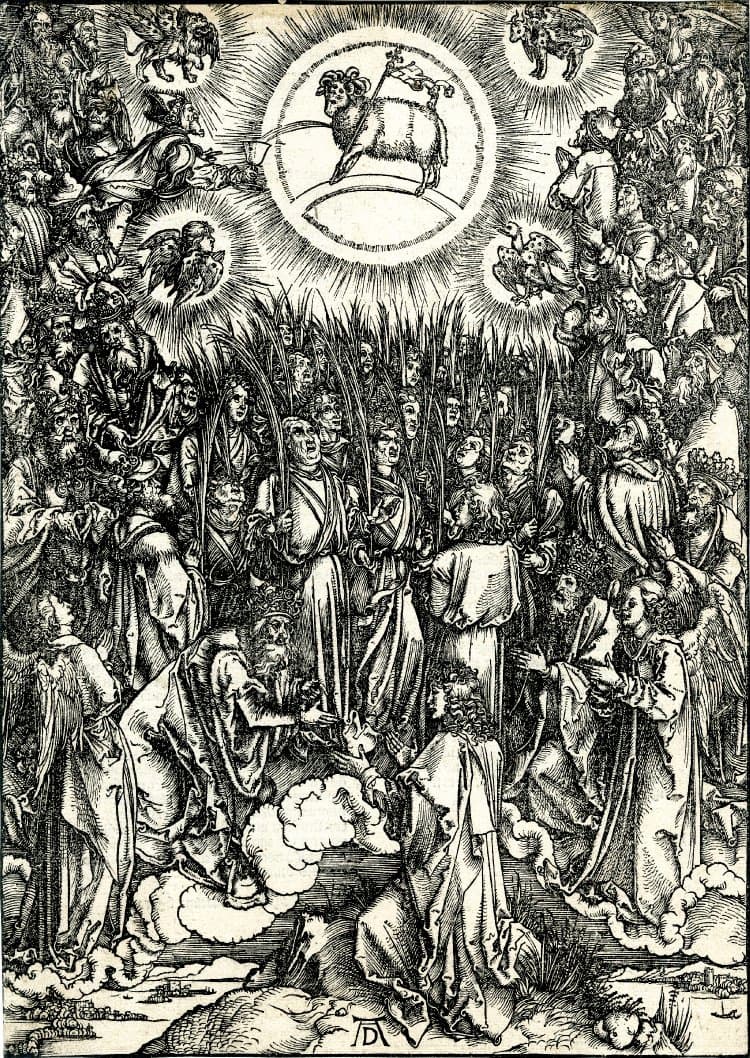 At the opening of the seventh seal, the seven angels appear and destruction is visited upon the earth: creatures die, ships sink, water becomes poison, the sky darkens, and an eagle cries ‘woe … to the inhabitants of the earth….’ 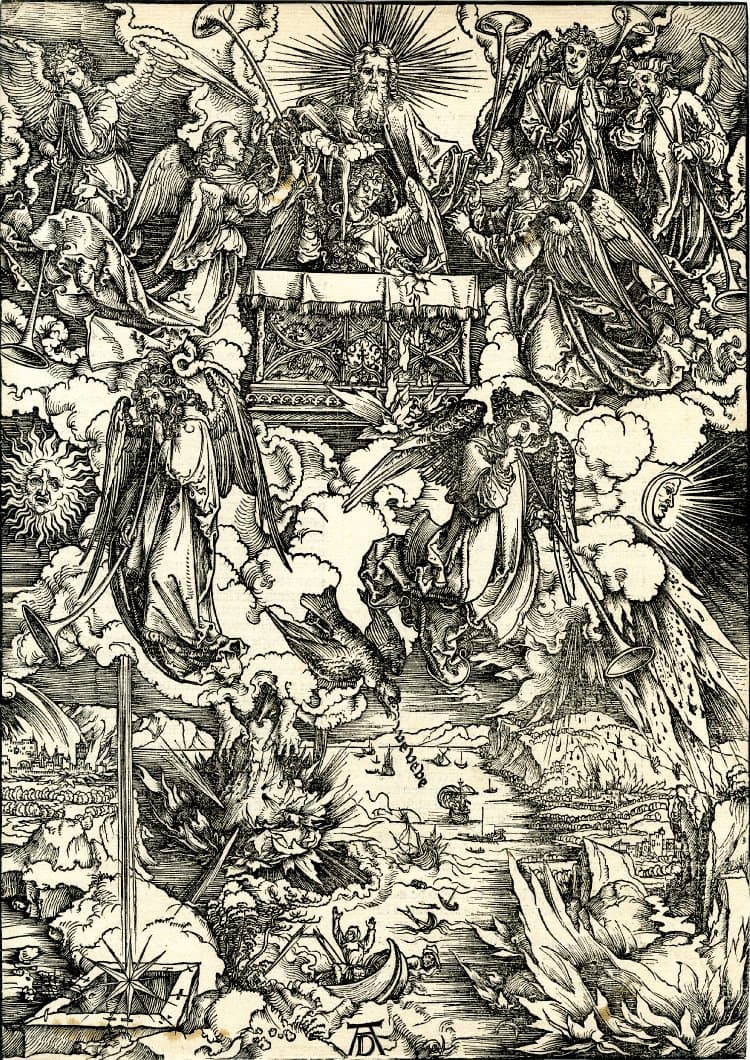 The four angels of Death appear and wreak havoc (Revelation 9). Those falling to the angels’ swords come from all walks of life: kings to commoners. 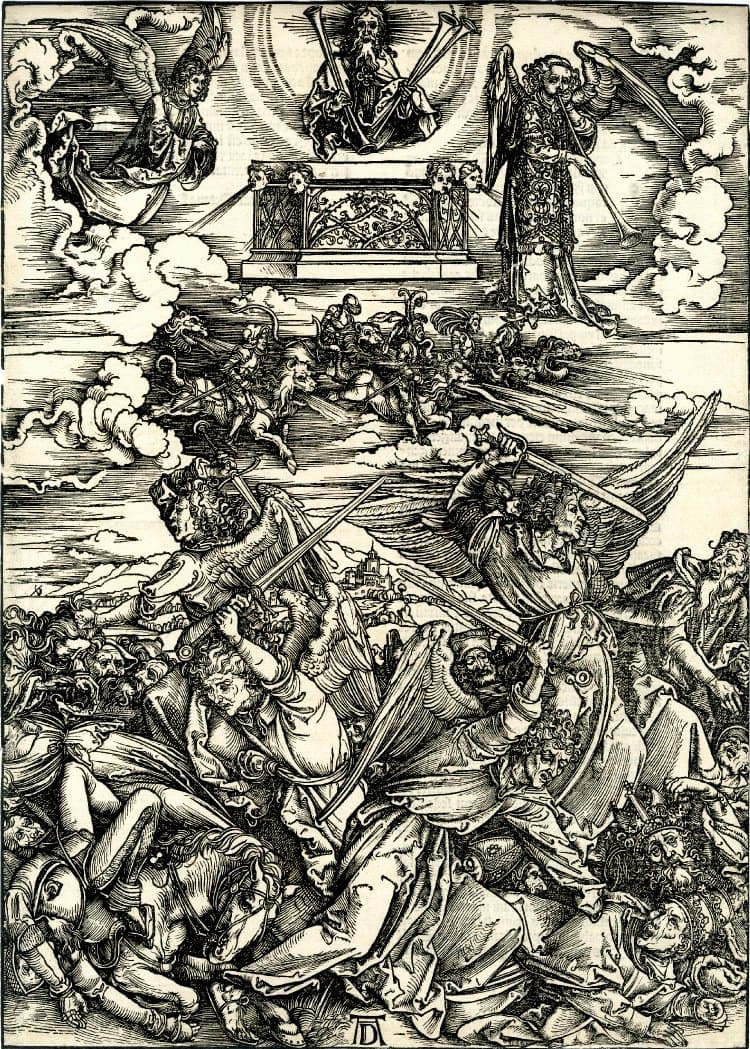 In Revelation 10:8-10, the narrator, John, is told to take a book from an angel who stands upon the sea and the earth (here shown as 2 burning columns) and eat it – it will be bitter in his belly, but sweet as honey in his mouth. 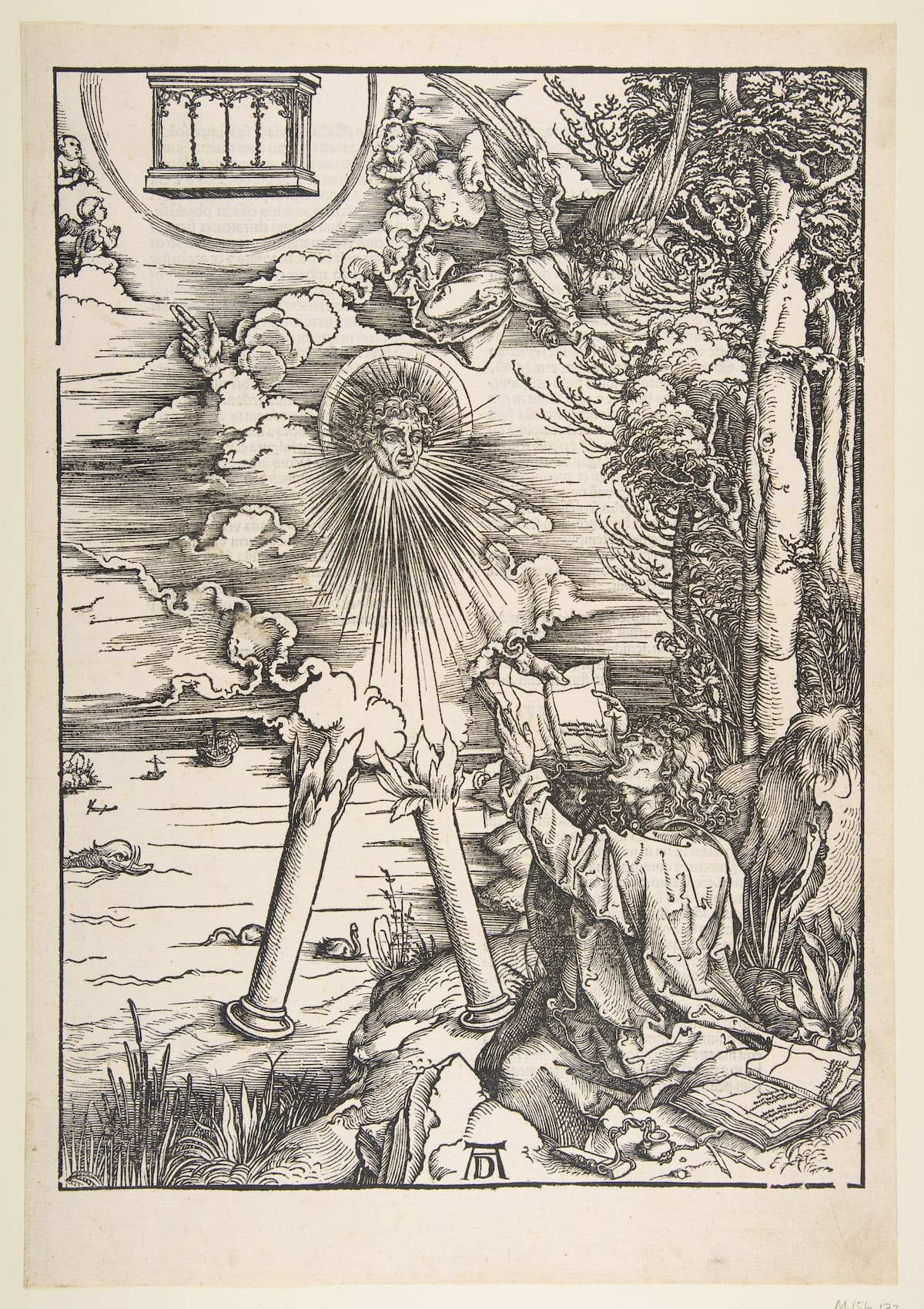 Revelation 10:1-4 brings us a pregnant woman ‘clothed with the sun, and the moon under her feet, and upon her head a crown of twelve stars’. A 7-headed dragon waits to devour her yet-unborn child while the Archangel Michael prepares to defend her. 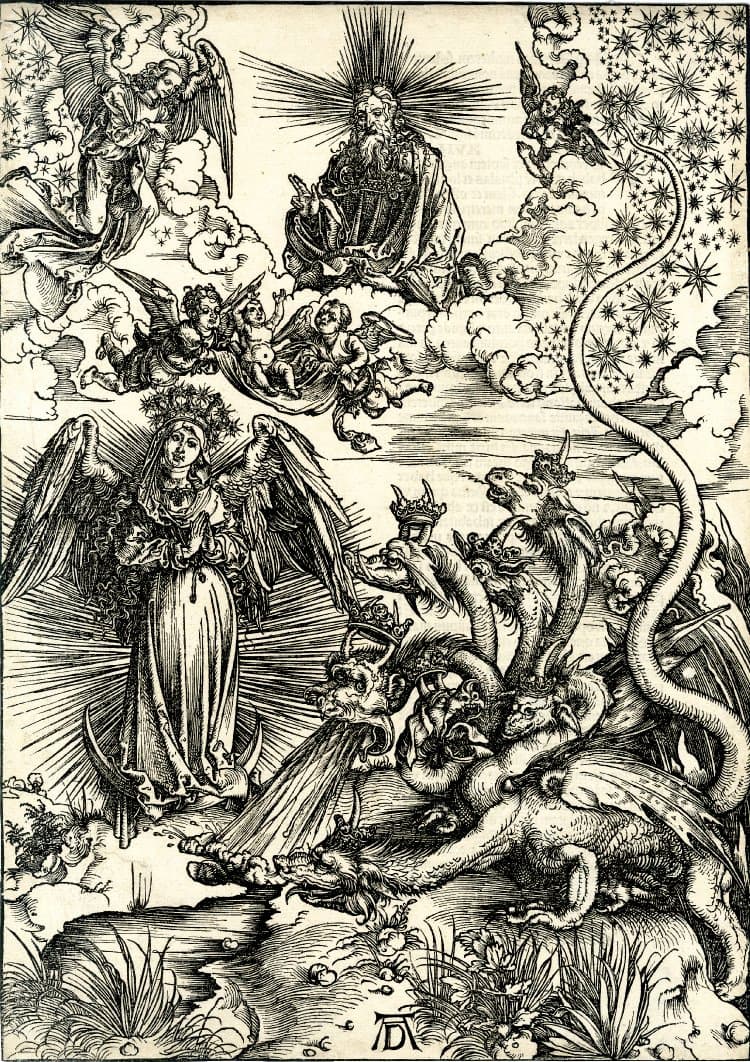 Michael and his angels (Revelation 10:7-9) fight the great dragon and defeat him. 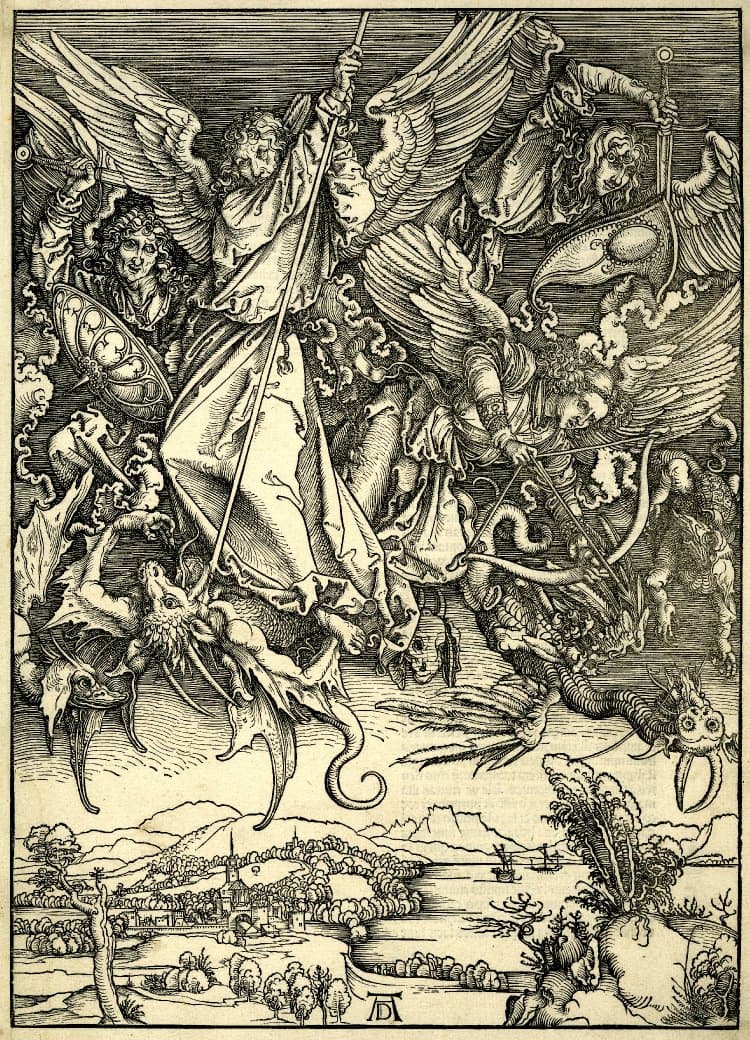 Next appears the Whore of Babylon (Revelation 17) who rides a beast with 7 heads and 10 horns. She is dressed in purple and scarlet, and wears gold, precious stones, and pearls, and carries a cup in her hand. It’s all symbolic: the seven heads of the beast represent 7 mountains, and 7 kings, and so on. She represents ‘the great city’, Babylon. 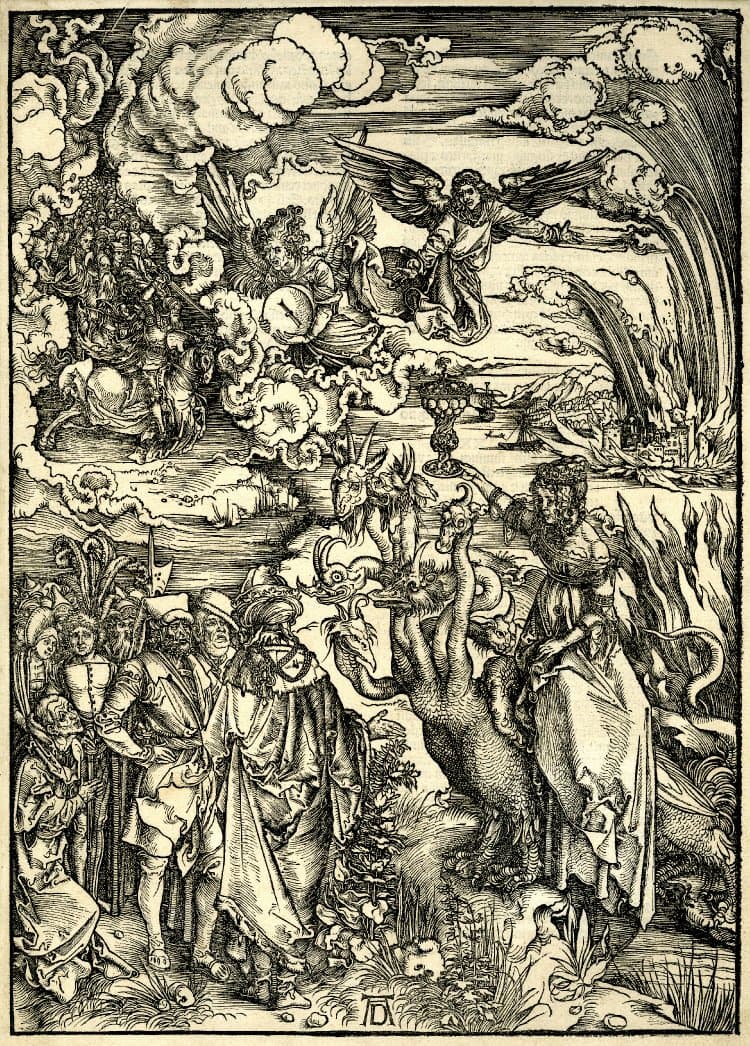 More beasts appear: a beast with lamb’s horns and one with seven heads that so fascinates the people that they follow it. (Revelation 13:1-18) 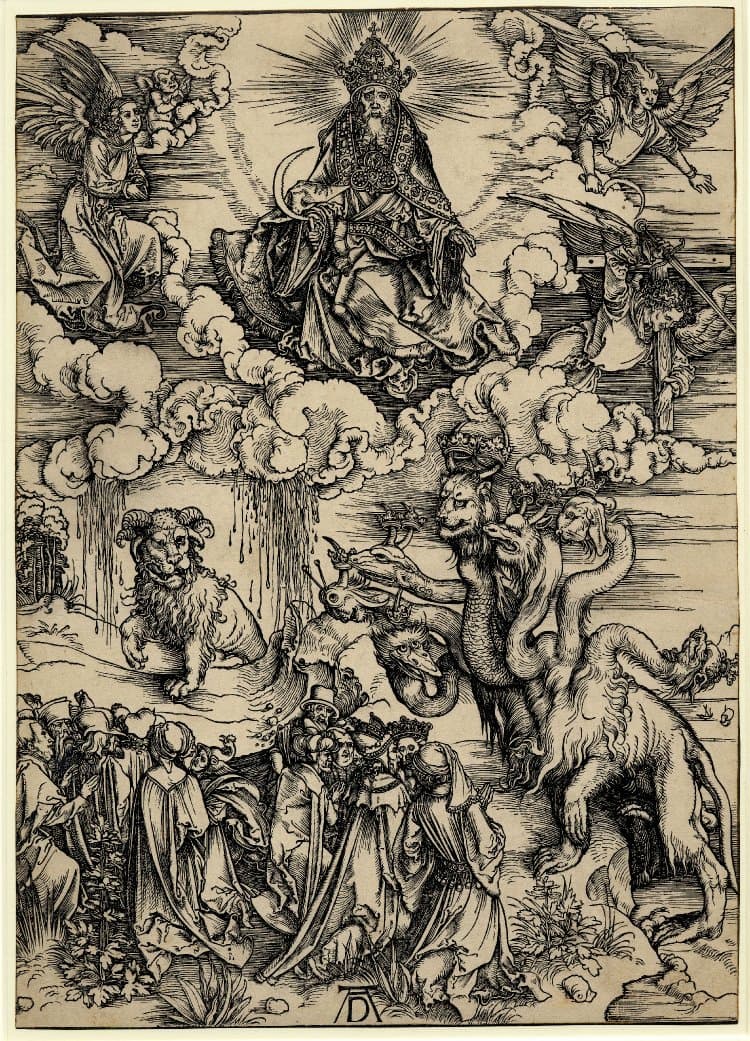 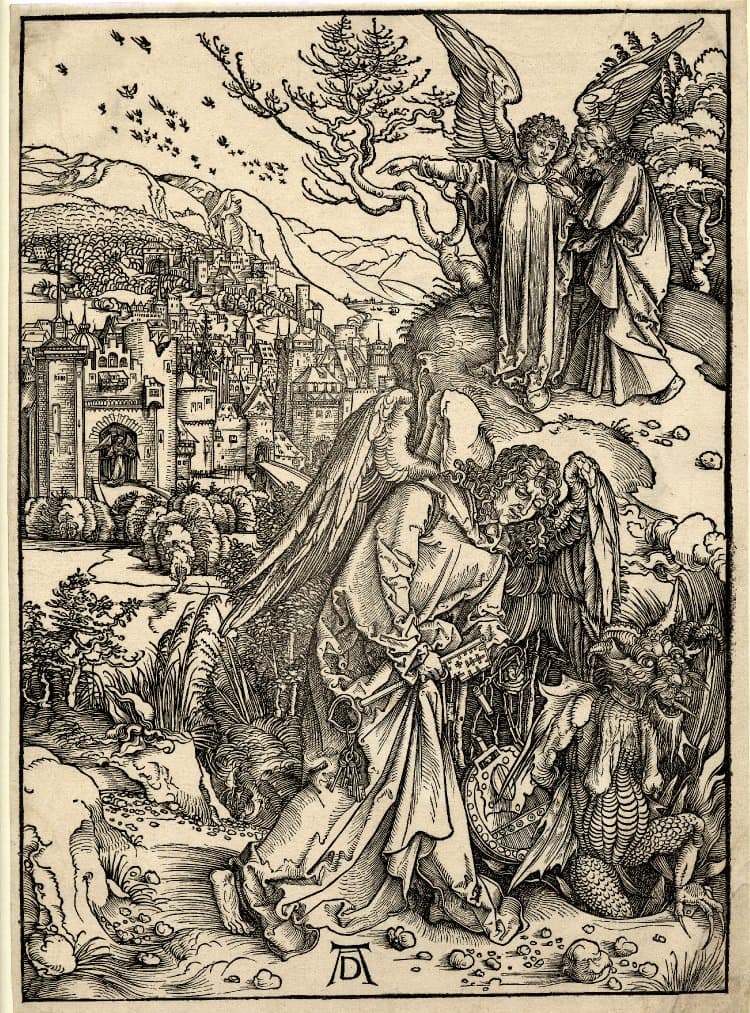 Now the music – John the Prophet’s complicated and symbolic vision was taken up by four very different composers.

Hilding Rosenberg (1892-1982) is regarded as Sweden’s first modernist composer. His fourth symphony, written in 1940 for baritone, choir, and orchestra, carries the subtitle of The Revelation of John (Johannes Uppenbarelse). In 1940, when he wrote the work, Denmark and Norway had been overrun by the Germans and France had fallen. Rosenberg wrote a dramatic work that has an elegant solemnity. The text consists of text from the Book of Revelation interspersed with poems by Hjalmar Gullberg.


For the appearance of the Woman of the Apocalypse and the seven-headed dragon (Image 11), the setting gets quite excited.


Rosenberg’s original setting was for reciter, choir, and orchestra, but in 1948-49, he revised it for Baritone instead of reciter.

One composer who also used a reciter was the French composer Pierre Henry (1927-2017). As a pioneer in the field of music concrète, he became known for his integration of noise into music.


The entry of the four horsemen of the Apocalypse combines low piano pitches into the electronic mix.

For his opera Resurrection, Peter Maxwell Davies (1934-2016) created an opera that takes a contemporary scenario and sets it into a morality tale. Rock music and advertising music fight with orchestral music. The Cat of the beginning eventually manifests as a dragon. 4 Surgeons, each with their own creed, operate on the patient to produce the Anti-Christ. We’re bombarded with ads for ‘Seven Stars Dentifrice’ to make your teeth ‘a-tingle with righteousness’.


And we’re invited to bet on some colourful horses: Victor, the White Horse; Mars, the Red Horse; Fame, the Black Horse, and finally Thanatos, The Daemonic, each with different odds. There are political rallies, and revivalist rallies, ending in the Song of the New Resurrection. It’s set to a cynical text, where lines such as ‘Solidarity with the workers!’ is followed immediately by ‘But keep them to their station…’. At the end, after dozens of advertisements for services, culminating in a real estate ad for ‘The new Jerusalem’, the Anti-Christ declares he’s ‘only an advert’.


The connection with Dürer’s vision comes from the increasing visual references in the opera to the symbols and images from the Revelation of St John as Dürer pictured them. In his preface to the printed libretto, Maxwell Davies recommends the designer to study these woodcuts.

Each composer uses the world around him: Rosenberg reacts to WWII and creates a ‘flaming protest against racism and genocide…’. Pierre Henry’s creation for the reciter and tape is a monumental work. Hambræus took up a challenge issued by the German author Thomas Mann, who created an entirely fictional Apocalypse setting.