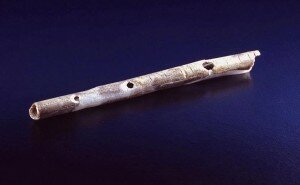 0,000 year old flute from the site of Geißenklösterle made from bird bones.
© The University of Tübingen

No — music is not finished, but when you listen to a piece of music, you are hearing the history of music and the people who have lived and created it. The importance of music cannot be overstated. Yehudi Menuhin said it best when he said, “We need music, as much as we need each other”.

Every day, I find a new composer, or a piece of music that changes the way I think and feel about music. The first musical note anyone ever played is easily within our reach today. That can’t be said for every art form, or for every experience or most means of communication.

Have a listen to Johann Heinrich Schmelzer’s Sonata Quarta (No.4) in D Major from Sonatae Unarum Fidium for Violin and Continuo. How modern does this sound? It could easily be a folk tune or pop song of today. It was created in 1664. That’s 355 years ago.

Some art forms like dance are as connected to human history as music is. Just like dancers today are connected to dancers of the past through body movement, every musician and composer today is linked to every other music player or creator throughout time by the music they make. The knowledge that musicians build within themselves through dealing directly with music on a daily basis creates this connection.

Just like the rain that falls now, rain fell with the same rhythm and sound as it did billions of years ago when it rained for the first time. Music has the same fundamentals now as it did the day someone decided to blow through the bone of a dead bird and create the first music, which was well before recorded history.

To know music is to know and experience history.

The living sound of music exists in every culture past and present. Music is used to record human history, to tell our stories and to entertain and move us. As a composer, I use music to tell my story. Just like any other music maker, if someone wanted to, and they had the resources, they could track and record my movements, thought processes and connections to the wider world, through my music.

Folk songs are one of the best markers of history. When people sing about their children, the fields they cultivate and their lived experience; few things will ever have more meaning to you than a folk song of your own people.

Mendelssohn: A Midsummer Night’s Dream, Op. 61, MWV M13, Act V: Wedding March
I often think that the music people used to mark change such as a wedding, a birth or death, says so much more than their words or actions can say. Mendelssohn‘s Wedding March from his suite of incidental music to Shakespeare’s play A Midsummer Night’s Dream, may still be the most used piece of music for western weddings. As someone once said, “when you hear this, you know it’s about to get real”.

Chopin‘s funeral march from his Piano Sonata No. 2, while exceedingly profound can have different effects on people. While at a concert in the Sydney Opera House in the early 1990s, as the pianist got to the march in the third movement, a woman just next to me turned to someone behind her and gave the broadest smile I have ever seen. Her reaction to this, which what I thought was the saddest music I’d ever heard has stayed with me for almost thirty years.

The history of music is one of the most fascinating subjects in the annals of human records. Yehudi Menuhin’s book and 1979 eight-part TV series The Music of Man, is still the most enlightening program on music that I know of. The research that has gone into this series combined with Menuhin’s in-depth knowledge of music makes it one of the best reference points to find out about the history of music. And, it is available on YouTube.