Composers Inspiration
“If music be the food of love, play on.”
Shakespeare and Music V – Much Ado About Nothing
by Janet Horvath January 17th, 2016 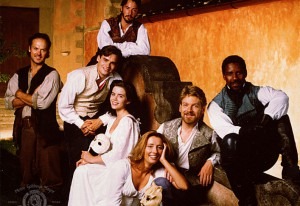 The cast of ‘Much Ado About Nothing’ (1993)
Credit: Metro-Goldwyn-Mayer Studios Inc.

Shakespeare’s best-loved comedies have inspired many a composer to write glorious music. Much Ado About Nothing one of his finest comedies is full of uproarious laughs, gossip, love and deception but also delves into timeless subjects of shame, honor and manners. But more interesting, Shakespeare challenges gender stereotypes by exploring infidelity and cuckoldry and in the end the pigeonholes crumble. Shakespeare was in mid-career when he wrote this play in 1598. If you are a punster, you would love this play. (from Act III)

BALTHASAR: Note this before my notes;
There’s not a note of mine that’s worth the noting.
DON PEDRO: Why, these are very crotchets that he speaks;
Note, notes, forsooth, and nothing.

And every barb is pointed:

“She speaks poniards, and every word stabs: if her
breath were as terrible as her terminations, there
were no living near her; she would infect to the
North star”.

The Hector Berlioz 1862 opera Béatirice et Bénédict is based on Much Ado About Nothing. Although today it is not performed as often as some of the standard favorites, it nonetheless met with great success when Berlioz conducted the first performances in 1862. It was his last major work. David Cairns who was Berlioz’ biographer wrote, “Listening to the score’s exuberant gaiety, only momentarily touched by sadness, one would never guess that its composer was in pain when he wrote it and impatient for death.”

There is some stunning music in this opera—Je vais le voir for soprano, Hero’s beautiful opening aria, and the exquisitely lyrical Nocturne, a duet for soprano and mezzo with an accompaniment of undulating strings. There are contrasts too, spoken dialogue, a drinking song which is scored for chorus, guitar and tambourine and a brilliant duet marked scherzo-duettino which ends the opera. “Man is a giddy thing!” The overture is played frequently in concert.

Sandford : Much Ado About Nothing, Duet “Tell me who told you?”

Sir Charles Villard Stanford wrote a version of Much Ado About Nothing an opera, composed in 1901, which we tend not to know about. It was considered more faithful to Shakespeare’s intentions surpassing even Verdi’s Falstaff. Sanford, an Irish composer, conductor, organist and prominent music teacher at the turn of the century with an astonishing output—200 works, including seven symphonies, nine operas, eleven concerti, (including a cello concerto), forty choral works, and chamber music, songs, and organ music—captures the wit and charm of the original. 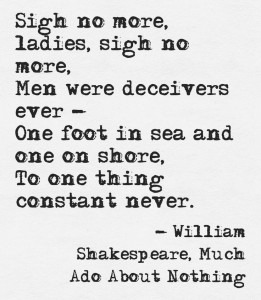 Stanford was professor of composition at the Royal College of Music and at Cambridge but eventually contributed to his own undoing. His students, a who’s-who of British composers—Gustav Holst and Ralph Vaughn Williams, Rebecca Clarke, Samuel Colerige-Taylor, John Ireland, Frank Bridge and Arthur Bliss, overshadowed their teacher. Even Elgar, who initially was a protégé, quickly surpassed Stanford. Their relationship turned bitter, as Elgar became the more famous of the two. Stanford was irascible and confrontational, severely critical in his lessons. And as a conductor he was not magnanimous. Mahler was willing to program Stanford’s music but Stanford ignored his contemporaries: Mahler, Debussy, Ravel and Stravinsky. Despite Stanford’s prodigious output he faded into obscurity and his works are rarely performed. But his music is well recorded and I stumbled on a short excerpt from the opera!

Korngold : Much Ado about Nothing Suite, Op. 11
Austrian child prodigy and noted film-composer Erich Wolfgang Korngold wrote the incidental music to Much Ado About Nothing, Op. 11 for a production at Vienna Burgtheater 1918–1919. He was only twenty-one but already established as being worthy of the commission. None other than Mahler had called him a “musical genius.” Korngold was only eleven years old when he composed a ballet, which was a huge hit at the Vienna Court Opera.

Korngold wrote fourteen numbers for Shakespeare’s play. They are enchanting and full of witty orchestration, lush harmonies and alluring melodies. For example, the Intermezzo is scored for the unique combination of two horns, harp, harmonium, piano, and strings. The incidental music was so successful that Korngold expanded the orchestration adding a five-movement chamber music suite, which today is performed as an orchestral suite. But he used and adapted the music in 1920. Audiences couldn’t get enough of the Shakespeare production in Vienna. Due to popular demand the run was extended—without the musicians who were no longer available. No problem! Korngold reworked the score for violin and piano, and played the keyboard part himself. This version became the inspiration for a four movement violin-piano suite, which is popular among violinists and performed often.

Overture to the movie Much Ado by Patrick Doyle

Adventure, romance, betrayal and comedy are still ever so popular. A modern day film of Much Ado About Nothing directed and acted by Kenneth Branagh, starring Denzel Washington, Keanu Reeves and Emma Thompson offer the opportunity for beautiful lush film scores, this one by long-time collaborator Patrick Doyle, a Scottish film composer who has also composed the scores to Henry V and Hamlet.