Features
“Music is a Miracle and the First Place of Art” – Alice Herz-Sommer
by Janet Horvath January 16th, 2016 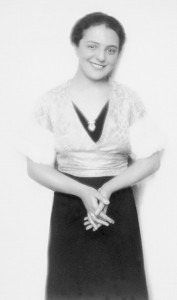 1947: Alice Herz-Sommer at a photoshoot for a concert
Photograph: Archiv Mickie Gorinstein

More than ever we need heroes. Alice Hertz-Sommer is one of mine. Alice practiced the piano several hours each day usually from memory and with total absorption—Chopin waltzes, Schubert impromptus, Bach inventions, Beethoven sonatas and she played chamber music with trusted friends and relatives until she passed away at age 110 in 2014. Such longevity is itself a marvel. Alice’s infectious laugh leads us to suspect that she had a carefree life.

Most victims did not emerge unscathed from the traumas that were experienced during the Holocaust. In 1943 Alice was rounded up by the Nazis and incarcerated at Theresienstadt (Terezin), the infamous concentration camp. There, in horrifying conditions, surrounded by death and filth and with virtually no food, she performed approximately 100 concerts including all 27 Chopin Etudes from memory. Her artistry offered sustenance and a momentary spiritual refuge for the desperate, desolate and ill prisoners. “Music was our food. Through making music we were kept alive.”

Alice Herz-Sommer was born in Prague in 1903 one of five children of a Jewish family that emphasized learning and music. Her brother was an accomplished violinist; her older sister Irma taught Alice how to play piano. From a very early age the children played chamber music together. Music was their language and mode of communication. 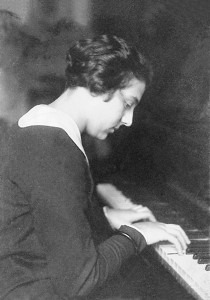 As a girl Alice regaled the famous guests that frequented Salon evenings at her parents’ home, rubbing shoulders with family friends: the author Franz Kafka and composer Gustav Mahler. The intellectual atmosphere of the household was a great influence on Alice as was the artistic milieu of early twentieth century Europe. Alice was eight years old when she heard Mahler’s Symphony No. 2 performed. Another acquaintance, the esteemed pianist Arthur Schnabel, encouraged Alice to become a musician. By 1928 she had become a musical celebrity, embarking on whirlwind concert tours all over Europe.

In 1931 Alice fell in love and within two weeks married the handsome violinist Leopold Sommer and they bore a son in 1937. But trouble was brewing for Jewish people. In 1939 Nuremberg laws were implemented—stringent regulations, which prevented Alice from concertizing and teaching. They were allowed to shop for one hour a day and only in restricted stores. She and her family had to move into a ghetto and her piano was confiscated. Alice risked being shot on the spot when she surreptitiously played on a hidden piccolo piano. After the Nazi invasion and takeover several family members fled but Alice remained behind to care for her ailing 72-year-old mother who was soon deported to Terezin and then the extermination camp Treblinka in 1942. Alice was grief-stricken. Her only consolation was to immerse herself in music, delving deeply in Chopin’s Etudes. 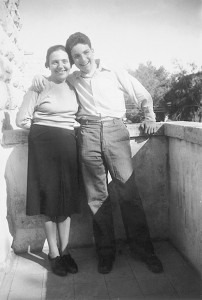 Alice and her son were transported to Terezin in 1943, the camp for Jewish celebrities, intellectuals, composers and performers. The Germans encouraged cultural life. Despite no sheet music and a few beat up instruments, concerts were presented including Mendelssohn’s Elijah and the children’s opera Brundibár, by Kans Krása, which was staged fifty-five times. Alice’s son sang the role of the sparrow in the opera. He also turned the pages at every weekly concert his mother was forced to perform while also working as a slave laborer.

Terezin was rigged as a model camp to deceive the inspectors from the Red Cross. Prisoners who were “resettled” were being “well-treated” here. The grass was painted green, fake stores and a school was opened for the propaganda film made and widely distributed by the Nazis. Little did the visiting Red Cross commission know that after the filming most of the performers were sent to the gas chambers. Other well-known artists such as the composer Victor Ullmann were among the thousands who perished in Terezin. Fortunately, Mrs. Herz-Sommer, the conductor Karel Ančerl and other greats such as Viktor Frankl author of Man’s Search for Meaning survived. Of 15,000 children only a handful endured. Buoyed by the hope music gave her, Alice was unfailingly optimistic. Her performances, even in those circumstances, were mesmerizing. 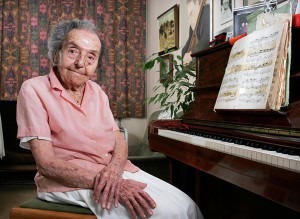 2010: Portrait of Alice Herz-Sommer at 106, at her flat in Belsize Park, London. Alice survived the Theresienstadt concentration camp in Czechoslovakia where she had to play the piano for the Nazis
Photograph: Sophia Evans for the Observer

Mrs. Herz-Sommer was liberated in 1945 only to learn that her husband Leopold had perished in Dachau. Alice moved to Israel where she was reunited with her twin sister, She became professor of piano at the Jerusalem Academy of Music and Dance, a position she held for 37 years. After her sister passed away Alice moved to Great Britain.

Later, in 2001, Alice’s son Raphael who had become a noted cellist suffered an aneurism and she lost him too. What sustained Alice? We can only marvel at a life lived with optimism, reverence for life, and passion for music. Alice believed that music brings us to an island of peace, beauty and love. The great composers—Beethoven, Bach, Schubert, Chopin, the geniuses who transported her—gave Alice strength and suffused her and those who heard her with joy to the very end of her days.

A film about her life won an Academy Award for best short documentary – The Lady in Number 6: Music Saved My Life.

Music brings you into another world –Alice