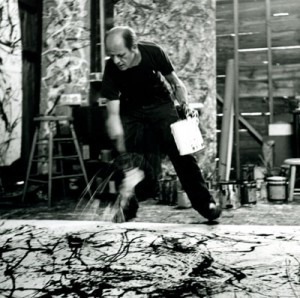 In this series on Music and Art, we’ve mainly been looking at representational pictures (people, trees, and landscapes). When we look at an artist from the world of abstract expressionism, all of our horizons open wide.

Jackson Pollock (1912-1956) was considered one of the finest artists of his generation. His unique style of drip painting challenged the artistic and critical community to find meaning in his gestural lines. Pollock would work with his canvas laid flat on the ground and used cans of house paint, rather than traditional artist’s oil paint that came in tubes, for his work. He didn’t just throw paint on canvases, he would also use hardened brushes, sticks, or even basting syringes to apply his medium. In laying the work on the ground, he could apply paint from every angle and avoided the problem of paint flow. Although he initially titled his paintings, he eventually just numbered them so that the viewer would have to confront the picture, rather than trying to see how the title worked. 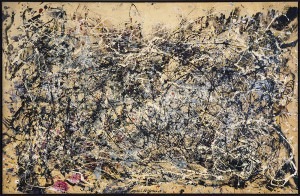 When you compare Number 1, which has an almost lacy quality, with Number 8, which is more about the thickening and narrowing of lines, you can start to see how Pollock’s abstract expressionism could be an inspiration for another kind of artist.

American composer Jennifer Higdon (b. 1962), was commissioned by the American Composers Forum for works for saxophone quartet and she produced the six-movement work Short Stories. Each movement takes on a different aspect: I. Chase. II. Summer’s Eve, III. Lullaby, IV. Splashing the Canvas, V. Coyote Nights, and VI. Stomp and Dance. It is the fourth movement, Splashing the Canvas, where she takes on the abstract expressionism of Jackson Pollock. The composer says that the movement “was inspired by the idea of an artist who splashes paint upon a canvas in a wild and uncontrolled manner, building up layers and constantly changing the resulting structure.” She also noted that Pollock was a very angry person and we can hear, even from the first notes, the simmering anger underneath all the gestures.

As much as you can see the layering structure through the repetitive gestures that Pollock used in creating his masterpieces, so Higdon layers sound upon sound, with repeats and alterations to create her own masterpiece.

The art of Pollock and the music of Higdon seem perfectly matched. Using the similar timbres of a saxophone quartet means that she is able to start on a perfect ground: the sound of a sax. From there, her melodic gestures, short and brisk, permit the creation of a complex sound world, built layer upon layer, so that we can hear the work we’re seeing. Higdon didn’t base her piece on any one Pollock work, but used his drip technique in a new way.