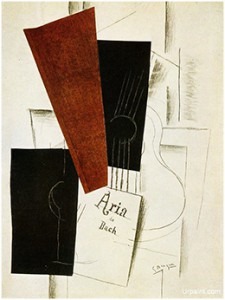 Many artists in the 19th and 20th centuries were inspired by the music of Johann Sebastian Bach, whose works had been re-discovered with Felix Mendelsohn’s performance of Bach’s ‘St. Matthew’s Passion’ in Berlin in 1829. For composers such as Richard Wagner and Gustav Mahler, Bach’s music was influential, but a true Bach renaissance came about at the turn of the 20th century with Bach Celebrations in Berlin in 1901 and in Leipzig in 1904, respectively. Many publications on Bach, such as Hugo Riemann’s ‘Katechismus der Fugenkomposition’ (Catechism of Fugal Composition) and Albert Schweitzer’s ‘J. S. Bach’ also brought his works into renewed focus. Many of these publications concentrated on the symbolism of Bach’s music – in particular on ‘The Art of the Fugue’, on its mathematical and expressive construct, on the continuum of structural tension and release, on the statement of a theme, its variations, inversions and reversals – always open to invention, never fixed. Not only composers, such as Eric Satie (who studied counter-point in the Schola Cantorum in 1905), Max Reger, Ferruccio Busoni, and Arnold Schönberg were influenced by Bach’s ‘Art of the Fugue’, but many painters, such as Braque, Kandinsky, Feininger, Klee, and many others too numerous to mention, were inspired by Bach’s compositions as well.

The Art of the Fugue
Glenn Gould

Between 1908 and 1914 many of Georges Braque’s (1882-1972) cubist paintings, made references to Bach in their titles, such as ‘Hommage à Bach’; ‘Aria de Bach’, ‘Still-Life Bach’, etc… Braque was a classically trained violinist and parts of violins appear in many of his ‘musical’ works, in particular in his ‘collage’ paintings, where he uses fragmented cut-outs of wood-grain paper simulating the finish of real violins. The construct of the fugue was also of particular interest to him. In his paintings, the objects represented become a musical construct existing and interacting at different levels through shadings, drawings, color, volume, mass, line and weight, which the viewer has to integrate into a synthesis, just as the listener could attribute similar constructs in Bach.

Bach’s music was a constant part of Lyonel Feininger’s life. The son of concert musicians, he was considered a musical genius in his younger years. Later, between 1921 and 1927, he composed several fugues, some of which were performed. A title woodcut page for a planned portfolio folder for thirteen fugues composed between 1921/22 is still in existence. A member of the famous Bauhaus, Feininger, just like its other members, saw the arts as the ‘building blocks’ of the future. In his painting of the ‘Barfüsser Kirche’(Church) in Erfurt, Germany, he attempts to simplify his expressions which he considered coming close to Bach’s synthesis of the fugue, with strict control in order to achieve a clear, transparent prism of the painted space. Feininger’s painterly variations of the Barfüsser Church are like vibrating movements of sound achieving perfect stillness on the canvas. 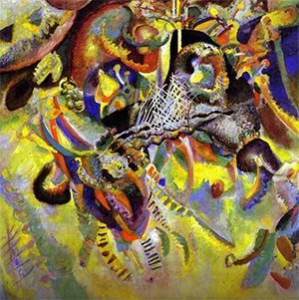 Wassily Kandinsky considered music the highest of the arts, in that music remains abstract (music existing only for and it itself — just as art for art) and does not seek to represent anything real and specific. A member of the ‘Blaue Reiter’ (German Expressionist group in Munich with Gabriele Münter, Franz Marc, August Macke and Alexej von Jawlensky), Kandinsky’s orientation in painting was closely tied to music in the search of rhythm and in mathematical, abstract construction. His painting ‘Fuga’ replicates the polyphonic order of a Bach Fugue and is at the same time a controlled improvisation. A light-yellow uncertain color in the lower part of the painting acts in opposition to smaller, darker dancing circles and smaller forms above; the entire canvas is traversed by a net of white lines crossing everything, which creates a concentration of forces.

Kandinsky’s treatise ‘Du Spirituel dans l’Art’ (Concerning the Spiritual in Art) published in 1912, emphasizes the concept of synesthesia, relating colors and sounds, as had the French poet Baudelaire in his poem, ‘Correspondances’. For Kandinsky the art of painting is tied to the repetition of tones of color within the painting — repetition which then creates a sense of motion. 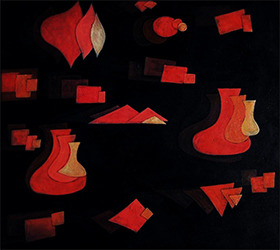 Color and the motion of forms also play an important part in Paul Klee’s works. His painting, ‘Fugue in Red‘ found its origin in the movement of forms; the groups of figures in red are floating forms and color progressions in space. The rounded and angular forms are representations of a theme and counter-theme (the principal basis of Bach’s fugues); the repetition of the triangle-motif as inversion, the succession of ovals as reversed movement, eliminate the element of time (the before and after) and stress synchronism — again fundamental elements in Bach’s compositions.

The importance of Johann Sebastian Bach’s music was central for many composers and artists in ensuing years and will be explored in future articles.