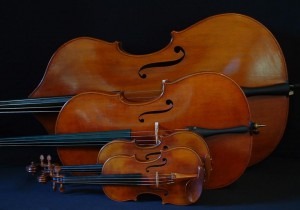 I’ve been a professional classical musician for more decades than I care to disclose. By far the most common comment I’ve heard (other than, “Why, that cello is bigger than you are!) is— “I don’t know anything about classical music. I like it, but I just don’t understand it.”

I invite these doubtful audience members to relax and listen. I assure them that one doesn’t necessarily need to “know” anything to enjoy the music.

In an attempt to rectify this seemingly insurmountable obstacle for some people toward classical music, I’m embarking on a series for the uninitiated, which we will call Music 101. I will devise some interesting materials and quizzes so that people new to certain classical repertory will know what to listen for. I hope to cover, with the help of my fellow Interlude writers: Everything You Always Wanted to Know About Music. Don’t be afraid to ask about particular questions you are burning to have explained.

First, I thought we should start with the instrument families of the orchestra.

The strings are by far the largest group of instruments in the orchestra—the violins, the violas, the cellos and the double basses. All of the stringed instruments are played with a bow, strung with horsehair. The larger the instrument the lower is their sound. Their four strings get thicker and longer too of course. They are beautiful works of art, carefully hand crafted of wood. The older instruments are like fine wines that have aged, honing their beautiful sound. Some of the most coveted stringed instruments of a maker hailing from Cremona Italy, (and the most expensive), are those made by Italian master luthier, Antonio Stradivarius (1644-1737.) He is considered the most significant artisan in the field. It is estimated that Stradivarius made 1,000 to 1100 instruments— violins, violas, cellos and even harps and guitars—and today we are lucky that 650 instruments survive. The varnish that he used on the surfaces of the wood defies analysis even to this day.

Guarneri is the family name of distinguished luthiers also from Cremona, Italy in the 17th and 18th centuries whose standing is comparable to the Stradivarius family. Guarneri del Gesu (1698-1744) made remarkable violins. Many world-class violinists prefer the instruments of Guarneri to Strads! Anne Akiko Meyers owns the “Molitor” Strad and just recently Meyers received the lifetime use of the “Vieuxtemps” Guarneri del Gesu, purchased for her by an anonymous buyer.

Among cellists, two names stand out. Dominico Montagnana (1686-1750) was an Italian master from Venice whose cellos are regarded as exquisite. Lynn Harrell has just announced that he is going to sell his beloved Montangana cello, an instrument he has played on for fifty years. Matteo Goffriler, also Venetian, is particularly noted for his cellos. His cello from 1733 belonged to the great cellist Pablo Casals, which he acquired in 1913 and played throughout his life until his death in 1973. From 1950-1965 Janos Starker played and recorded on the “Aylesford” Stradivarius. In 1965 Starker acquired a Goffriller cello made in Venice in 1705, which he owns to this day.

Now perhaps you can understand a string player’s reticence to allow anyone to even get near our instruments. Although most of us play instruments of lesser quality, it is like walking around with a priceless one-of-a-kind painting and they are beloved family members.

The woodwinds include the flute, clarinet, oboe, and bassoon and their relatives—the piccolo, the alto and bass flute, the bass clarinet, the basset horn, (clarinet family) the English horn (oboe family) and the contra-bassoon. Once again, the lower frequency instruments are larger. The oboe, clarinet and bassoon are played with reeds—pieces of painstakingly shaped and scraped cane. Usually the oboe and bassoon players shape their own reeds, as the behavior of the reed is the primary factor in the oboe’s quality of sound including the pitch, and the tone quality. The reed contributes to the ease of the production of the sound. Ask any oboe player and they will tell you that they spend unbelievable numbers of hours soaking, binding and scraping reeds, some specifically shaped for certain pieces of music, and even up to the moment before they play. An entire toolkit is required for this process. 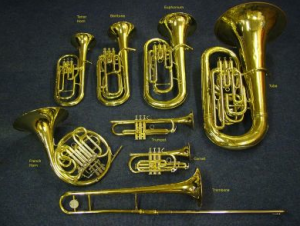 The brass instruments are easily identifiable. They are the loudest instruments and are made of the shiny metal— consisting of the trumpets, French Horn, trombone and tuba and their relatives: Piccolo trumpet, cornet and flugelhorn (trumpet family) the euphonium (tuba family) and the more rare Tuben or Wagner horn, which combines elements of the French Horn and the tuba. This instrument was created specifically for Wagner’s’ operatic Ring cycle. French horn players typically play the Wagner tuben. The tuben are finicky instruments, which also appear in the Bruckner Symphonies.

And the granddaddy is the cimbasso! This instrument is in the trombone family The cimbasso encompasses a similar range to the tuba or bass trombone and is played rarely.

The percussion family includes any number of instruments to bang, scrub or scrape with mallets or sticks, or to shake and whirl. They are considered to be the oldest musical instruments after the human voice. The orchestra percussion section might include additional instruments that are not strictly percussion instruments per se, like whistles, sirens, bells, and tuned instruments such as the marimba, xylophone, glockenspiel and vibraphone. The timpani or kettledrums belong to their own subgroup as they are tuned to certain pitches. Usually a timpanist is hired in addition to the percussion players. When you see the timpanist lean down as if to put their cheek on the instrument it is to hear the tuning.

Keyboard instruments do make their appearance in the orchestra as well—the piano, celeste, harpsichord and organ.

And finally the harp is a multi-stringed instrument generally categorized in the stringed instrument group but it has its own category. Although there are many sizes of harps including folk, lap and Celtic instruments, the orchestral harp is a large instrument requiring heavy lifting. It has a frame, sound-board and pedals so the instrument can play in different keys. During contemporary music you will see a lot of fancy footwork from the harp player while both of their hands strum the strings.

Benjamin Britten’s A Young Person’s Guide to the Orchestra is a wonderful piece, written to highlight each individual orchestral section separately.

Reading music is like learning another language. The markings in the sheet music include established symbols. In addition to signs that indicate the time signature, the clef and key signature, we have symbols to indicate length of notes, pauses, tempo markings and dynamic markings, as well as markings for the direction of the bow movements. The tempo marking at the beginning of a movement sometimes indicates speed as well as character. For example, andante means gently as well as slowly. Additionally, the composer often uses either Italian or German words within the piece of music to indicate mood, style or interpretation. We become adept at reading all of these indications simultaneously. Fingerings, though, are typically a matter of a player’s preference.

Of course this is secondary to the task of mastering our instrument! We must learn to coordinate our two hands and/or lips, mouth and fingers to produce a mesmerizing sound. Once we can do that and read the music, then the interpretation can begin. The conductor indicates the emotion and passion with his or her movements, stick technique and facial expressions, to produce one unified concept.

The music is about conveying a mood or emotion. Our response is always subjective as with other art. As individuals what it may conjure up for me might be different for you and even that of the composer. Think of the last movie or theater production that you went to. The music assists in depicting the emotions in the movie—it may inspire feelings such as agitation, apprehension, remorse, bitterness, and elation. It may evoke memories. Just let it wash over you so that you and it will allow you to create your own visual images.