Wolfgang Amadeus Mozart and his mother arrived in Paris in April 1778. As he quickly reports to his father, he wasn’t particularly impressed by the city of lights. In fact, he considered Paris to be a real dump! He complains about the muddy and dirty streets, and even more damning, he considered Parisians to be “rude and obnoxious, filled with arrogance and obsessed with self-importance.” And what is more, Mozart’s letter gives us terrific insight of how musicians were treated by royalty at that particular time; they were considered simply servants. With a letter of recommendation from Madam Grimm in his pocket, Mozart went to see the Duchesse de Chabot. Once arrived, Mozart was asked to wait for half an hour in an unheated and icy room. When the Duchess finally arrived, she asked him to play on one of her instruments, but with his fingers numb from the cold, Mozart asked to be first taken to a heated room. 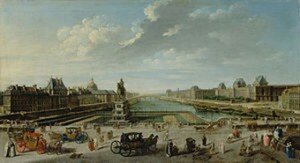 So the Duchess took him to a different room, but once again the windows and doors were open, and “not only my hands but my body and my feet were cold,” he reports, “and I got a big headache.” Meanwhile the Duchess was entertaining a number of gentlemen sitting around a large circular table. And finally, Mozart was asked to play on “a wretched and miserable piano.” But what really got Mozart upset was the fact that the Duchess and all the gentlemen just kept on talking and then left the room! He basically was left to play to the chairs and tables, and the walls! Mozart was getting rather annoyed, and stopped halfway through his “Fischer Variations.” When he was about ready to leave the house, the Duchess did not allow it, and made him wait in the same cold and unheated room until her husband came in. As Mozart writes, “I was almost unconscious of all the cold and headache,” and he vowed never to play for these “silly snobs” again.