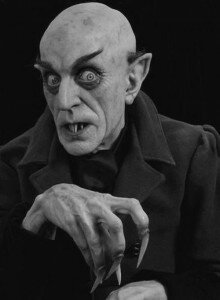 When you think of the music of Aaron Copland, you think of light. Open vistas. Cowboys. Cowgirls. Pure Americanisms. But in the early 1920s, Copland was in Paris, starting to write his first orchestral music. He and his roommate, the writer, director and critic Harold Clurman, went to the movies. Silent movies, of course.

Inspired by what they saw, Copland decided to write a ballet if Clurman would write the scenario.

The movie that inspired them was F.W. Murnau’s 1922 horror classic Nosferatu. Murnau’s German Expressionist horror film carried the full title: Nosferatu: eine Symphonie des Grauens (Nosferatu: A Symphony of Horror). Murnau’s film was an unauthorized adaptation of Bram Stoker’s 1897 novel Dracula and after a court fight, the Stoker heirs won their lawsuit about rights, and the court ordered all copies of the film were to be destroyed. Luckily, some copies did survive, which is how we know it today.

At first the Copland/Clurman scenario was called Le Necromancien (The Necromancer), i.e., a magician who brings back the dead, but they later called the work Grohg after its lead character. Copland wrote that this was to be the most ambitious work of his Paris years. The music was intended to be morbid and excessive, to meeting the taste of the time for the bizarre. Copland also took the opportunity to use much more modern rhythms and dissonances than he had before in his need to provide gruesome events for the ballet.

After playing the work with Nadia Boulanger arranged for piano four-hands at a party in 1924, Copland put the work away and did not release it for publication. He did arrange one section of the introduction, the Cortége macabre, for Howard Hanson, director of the Eastman Philharmonic, but Copland withdrew the work from his catalogue in 1927 but reinstated it at Hanson’s request in 1971.

Copland’s repressed score was found again in its 1932 revised version in the 1990s by English composer Oliver Knussen and it received its first orchestral performance in 1992.

The ballet was devised in 6 sections:

1. Introduction and Cortège—Entrance of Grohg There is a slow, moody introduction, followed by the bearers of coffins. The dance of the coffin bearers reaches a climax as Grohg the sorcerer enters, and the dancers pay homage to him.

Copland: Grohg: Introduction and Cortège—Entrance of Grohg (Detroit Symphony Orchestra; Leonard Slatkin, cond.)
2. Dance of the Adolescent Grohg revives the corpse of an adolescent who becomes terrified by the sorcerer after dancing with him. Grohg then violently strikes down the adolescent.

Dance of the Adolescent
3. Dance of the Opium-Eater (Visions of Jazz) Grohg next revives the corpse of an opium addict. The addict dances to a jazzy tune, but then Grohg takes pity on the addict and removes the magic which brought him back to life. The opium-eater is then returned to his coffin.

Dance of the Opium-Eater (Visions of Jazz)
4. Dance of the Street-Walker The corpse of a street-walker is then revived, and she does a dance which arouses Grohg’s passions. He tries to embrace the woman, but there is a struggle and she, too, is struck down.

Dance of the Street-Walker
5. Grohg Imagines the Dead Are Mocking Him Grohg begins to hallucinate and imagines that corpses are making fun of him and violently striking him. Nevertheless, he joins in their dances. Chaos ensues, then Grohg raises the street-walker over his head and throws her into the crowd.

Grohg Imagines the Dead Are Mocking Him
6. Illumination and Disappearance of Grohg The stage turns dark except for a light focused on Grohg’s head, and he slowly disappears to music which echoes the gloomy music at the beginning of the ballet.

Illumination and Disappearance of Grohg
It’s Copland the consummate composer, but not on a theme or in a sound that we know him for today. It would be interesting to see if the ballet could be revised, based on both the film the two collaborators saw and the description of the scenes.