Mozart indignantly writes to his father from Vienna: “You are looking forward to seeing me again, my dearest father! That alone can persuade me to leave Vienna…We had a grand concert here yesterday—probably the last. It was a great success, and in spite of all the obstacles put in my way, I still had a better orchestra than Brunetti, as Ceccarelli will tell you; I had so much trouble arranging all this, but it’s easier if I tell you about it in person…But if anything like it were to happen again, I can assure you that I’d lose all patience, and you’d certainly forgive me for doing so. And I beg you, my dearest father, to allow me to return to Vienna next Lent, for it certainly won’t be a disaster for me, most certainly not.” 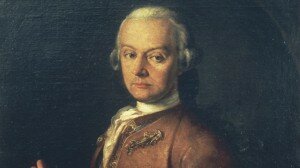 As part of Archbishop Colloredo’s entourage, Mozart appeared at a concert at Prince Galitzin’s on 3 April 1781. The occasion proved a triumphant success for Mozart, who not only performed his symphony but also played a concerto. When the Archbishop announced that his musicians had to return home to Salzburg in two week’s time, Mozart was decidedly unhappy as he felt that he was just beginning to make an impression in Vienna. Leopold was deeply alarmed at Mozart’s plan of staying in Vienna at his own expense, and in a series of stern letters implored his son not to risk his job in a frivolous way. A heated exchange of letters culminated in the 28 April correspondence, and Mozart continues:

“But you must promise me in your next letter—for only on this condition shall I return to Salzburg, so that I can give my word to the ladies here. Stephanie is going to give me a German opera to write. And so I await your answer…I still can’t say when or how I shall leave…Yesterday, after the concert, the ladies kept me at the harpsichord for a whole hour, I think that if I’d not slipped away, I’d still be sitting there; I thought I’d already played quite enough for nothing.”