Here are my picks to remember 2022 in music.

Nixon in China according to TANG Jianping

How about a different narrative of Nixon in China, probably from a Chinese perspective? Beijing-based composer TANG Jianping’s opera Premier ZHOU (2019) got its Beijing premiere in the first week of March at the Tianqiao Performing Arts Centre, a commission and production by Jiangsu Performing Arts Group. The performance was directed by XING Shimiao with TAN Lihua conducting a pickup orchestra. 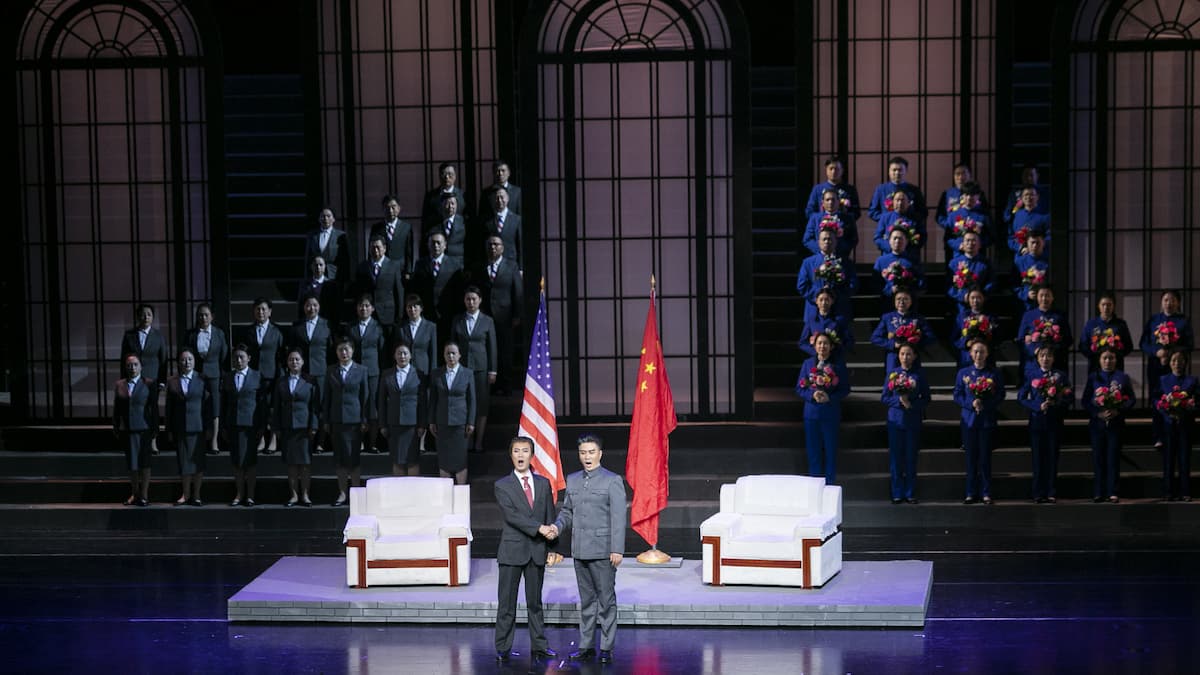 The four episodes of the opera offered a biographical account of Premier ZHOU Enlai, the founding Premier of China, a wingman of MAO, and a career diplomat who set the tone for China’s international relations up till the late 1970s, including the US-China relation.

In an episode dedicated to ZHOU’s diplomatic efforts, he welcomes President Nixon and the First Lady at the airport as they disembark from Air Force One on their ice-breaking trip to China in 1972, followed by a scene of high tension taking place at ZHOU’s conference room. It ends with a solemn duet accompanied by a menacing chorus holding U.S. and Chinese flags in which President Nixon, sung by Mongolian baritone Shinbayaar, exclaimed: What a tough negotiator he is! 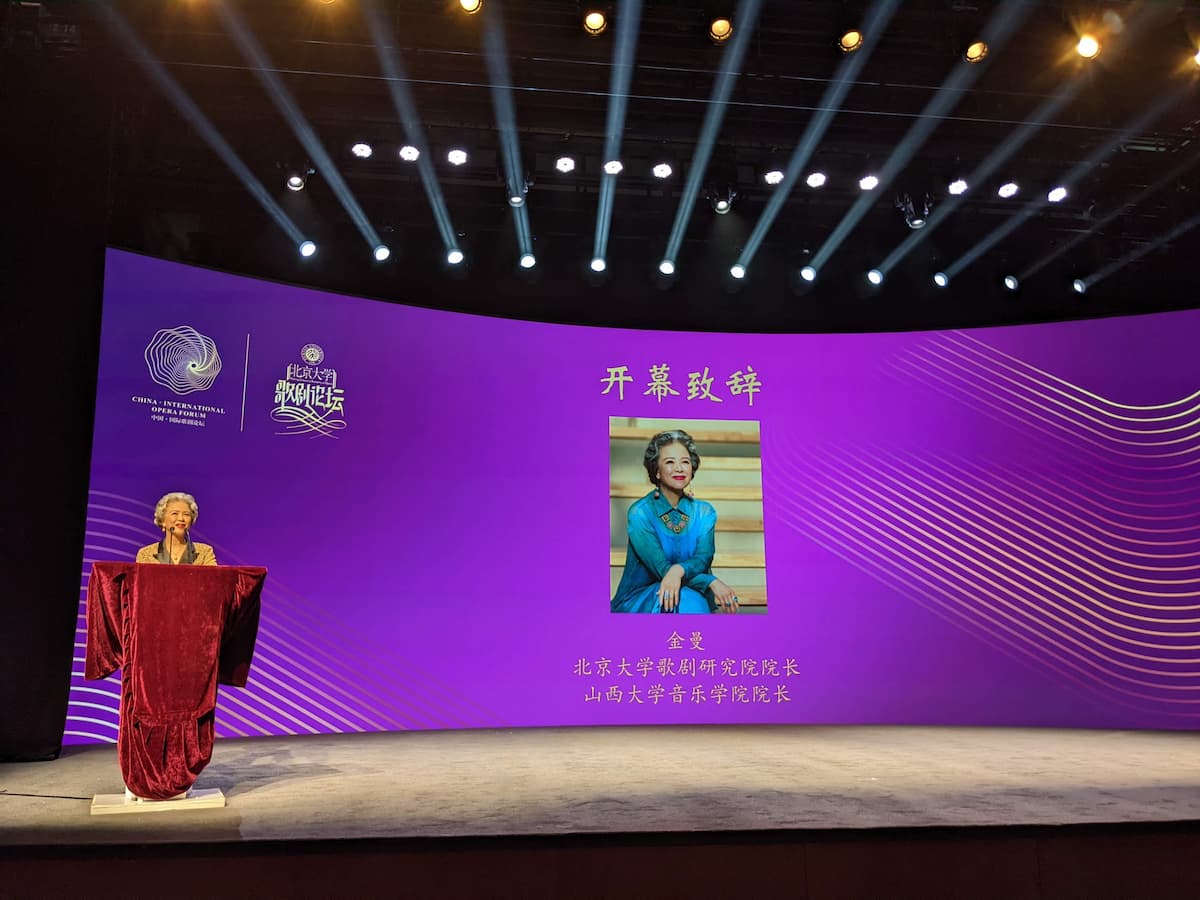 The Peking University’s Opera Academy hosted the inaugural China International Opera Forum (CIOF) in Beijing at the Tianqiao Performing Arts Centre in mid-January to talk about a possible exit plan from the pandemic. International participants from Opera Europa, South Korea, and Japan took part in the forum via long distance while over 90 Chinese delegates discussed various topics in person. The forum called for unity and data sharing among the sector, and a more provocative online initiative that not only delivers digitalised/televised opera but digitally reshaped content that fit into the realm of “meta-universe”.

The blast of contemporary music in Chengdu, Shanghai, Nanning, but Beijing is silenced 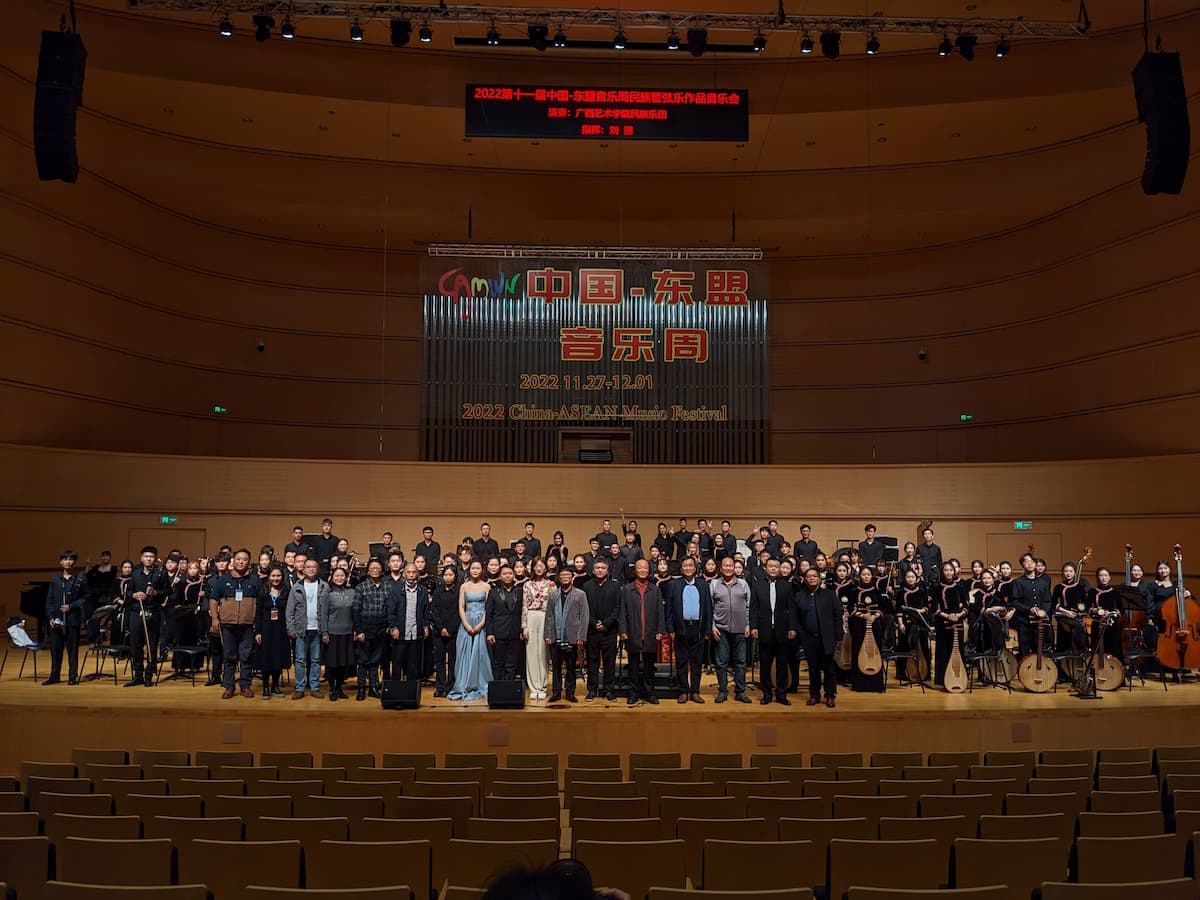 After almost six months of stringent lockdown due to Covid all over China when live music was largely muted, performances began to surge in November as restrictions were relaxed. Major contemporary music festivals originally scheduled for the first half of the year were able to take place all of a sudden. From the beginning of November to the end of the month, China saw the 8th Exchange of Chinese Composers, a nationwide initiative for young composers to introduce and exchange new works, hosted by the Sichuan Conservatory of Music in Chengdu (2-6), the inaugural Shanghai Contemporary Music Festival hosted by the Shanghai Conservatory of Music (15-19), XI China-ASEAN Music Festival hosted by the Guangxi Arts University (Nov 27 – Dec 1), and Hangzhou Modern Music Festival hosted by Zhejiang Conservatory of Music (Nov 30 – Dec 3). 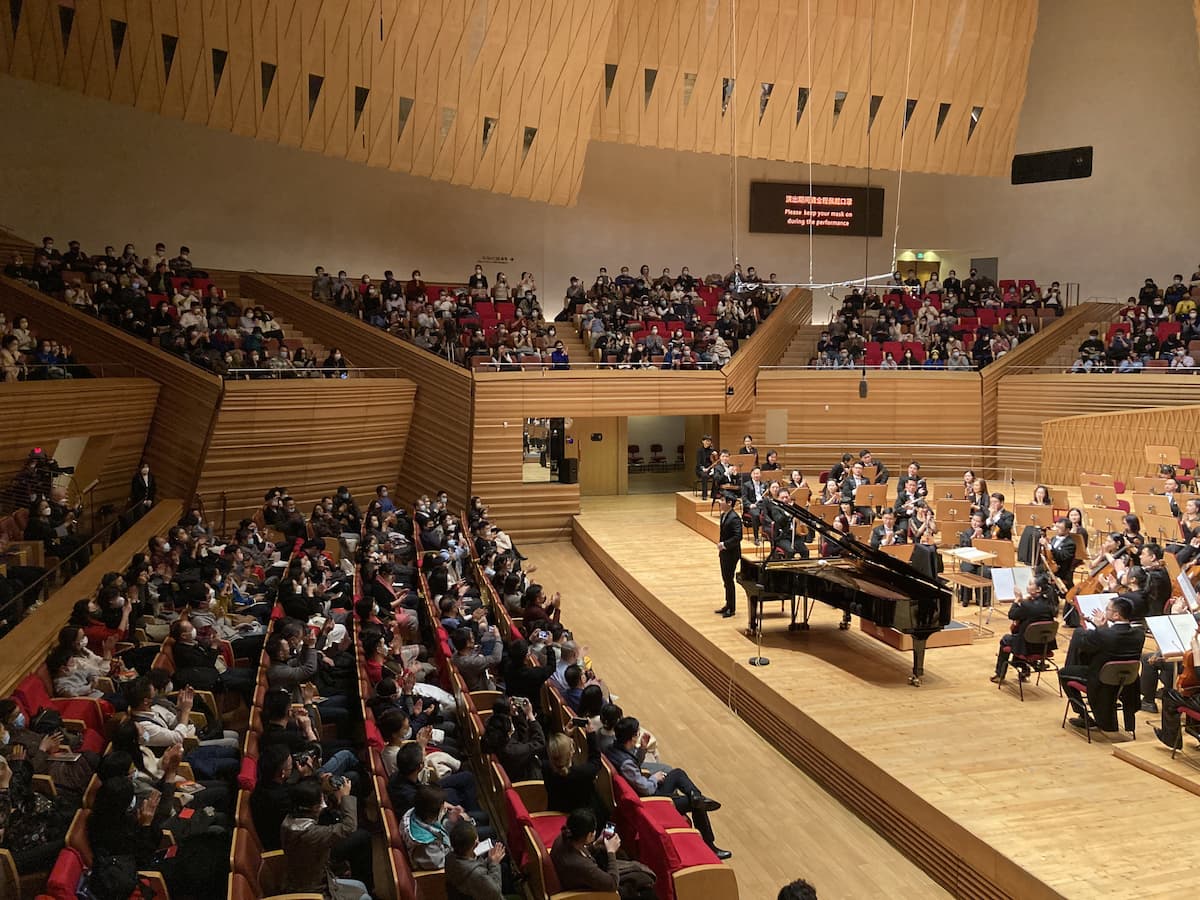 All together they have contributed hundreds of new works in the presence of the composers performed by the cream of orchestras including Shanghai Symphony Orchestra, Shanghai Philharmonic Orchestra, Shanghai Opera Company Orchestra, Shanghai Contemporary Soloists, Shanghai Camerata, Chengdu City Concert Hall Orchestra, Guangxi Arts University Symphony Orchestra, and Chinese Orchestra.
As the nerve centre, Beijing keeps being silenced due to high-stakes Party’s Congress in October and prolonged Covid restrictions. The Beijing Modern Music Festival, which usually takes place at the Central Conservatory of Music every May, was canceled for the third year since 2020. The Beijing Music Festival, founded and chaired by Long Yu, had to be canceled for the first time since 1998. 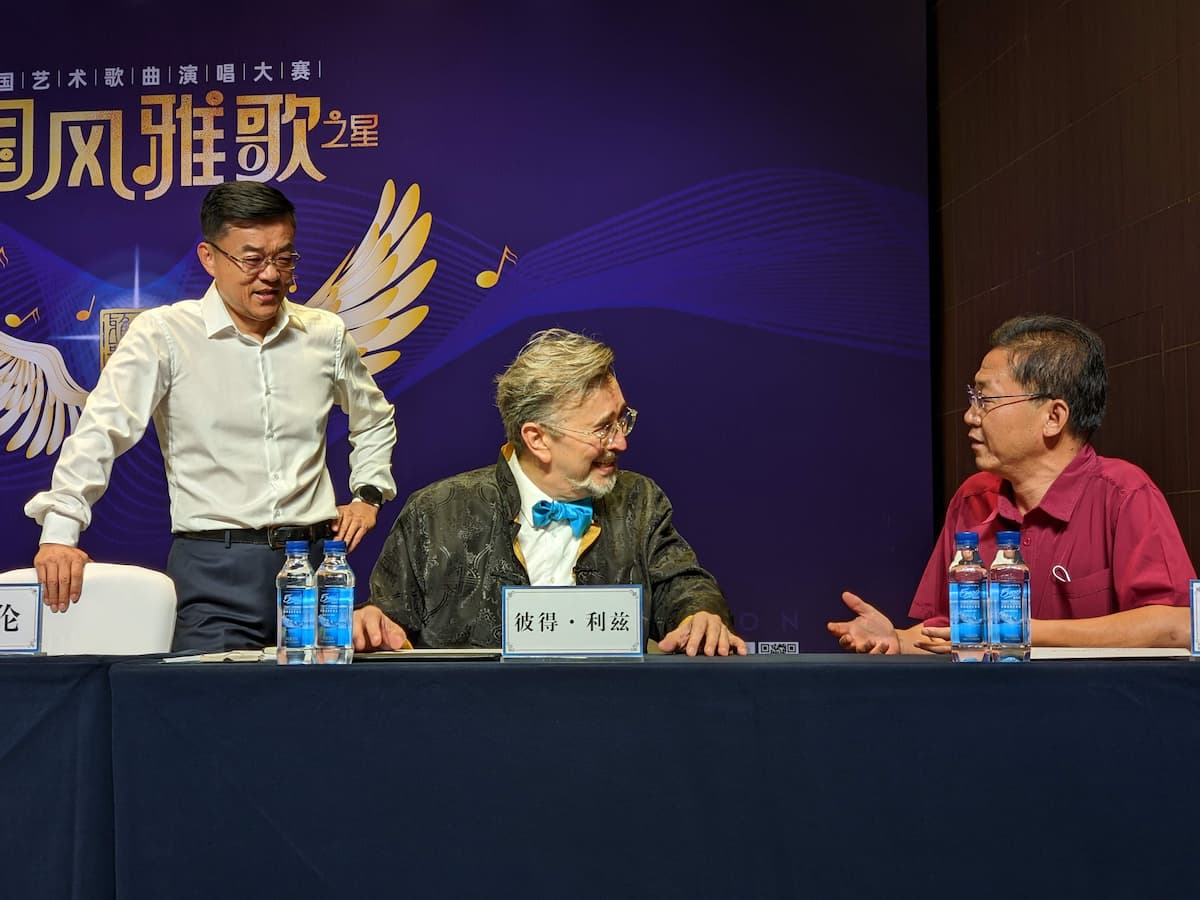 The inaugural Art of Yage Singing Competition was presented by the Culture and Tourism Commission of Chongqing at the end of August. Yage literally refers to an elegant song in Chinese but the word embodies the ideal projection of Chinese art songs set to meaningful poetry sung in perfect diction of Mandarin with effortless technique and charismatic stage presence, all criteria for judging the contestants by the six jurors sitting on a panel chaired by FAN Jingma, the American Chinese tenor who masterminded and materialised the competition. In a way, Yage is the Chinese evocation at least, an equivalence at best, to German lieder plus everything to achieve it, in the score and on the stage, exact reasons behind the creation of the competition which includes three rounds entwined with masterclasses, lectures and demonstrations given by jury members to candidates. All jurors agree that the technique, pedagogy, and Fach system unique to singing art songs in Mandarin should be developed for the training of young singers ready to dedicate themselves to singing in Mandarin. That’s why Mrs. Hong Yun, a retired phonetics expert from Beijing who used to judge national TV news anchors sits on the judging panel alongside three singers and two composers: Dilber, Uighur soprano and a former soloist at the Finnish National Opera, ZHANG Yalun, baritone and former house singer at Hannover and Stuttgart Staatsoper, composers FANG Dongqing and Peter Ritzen, a Belgium pianist, conductor living in Chongqing. Ms. LUO Yudan won the first prize. She was accompanied from the piano by LUO Xu in the final.

Suona is in the spotlight with five new works with the orchestra in Chengdu, Shanghai and Nanning

Suona, aka Chinese trumpet, is a double-reed woodwind widely used in the countryside for events like wedding, funeral and anything in between, maybe because it projects a huge, penetrating sound, also because it doesn’t require much technique to make a big impact. There are composers who defy that conventional wisdom. They believe that the Suona could be a virtuosic instrument too, just like the trumpet. A string of pieces written for Suona and orchestra premiered in the second half of the year. Chengdu based composer AO Xiang’s Drama Like, Beijing based composer GUO Wenjing’s Soul of Mountain, and Shanghai based composer LI Bo’s Seven Episodes after Monkey King were premiered by Suona player HU Chenyun with YAO Shenshen conducting the Shanghai Chinese Orchestra in September. Nanning based composer ZHONG Juncheng’s Symphony No. 12 for Suona and orchestra and Shanghai based composer SHEN Ye’s One Flower were both performed by female Suona player LIU Wenwen in their premieres. LIU also revisited Shanghai based composer XU Jianqiang’s Opening the Door at the closing concert of the 1st Shanghai Contemporary Music Festival with LIN Daye conducting the Shanghai Philharmonic Orchestra in November. 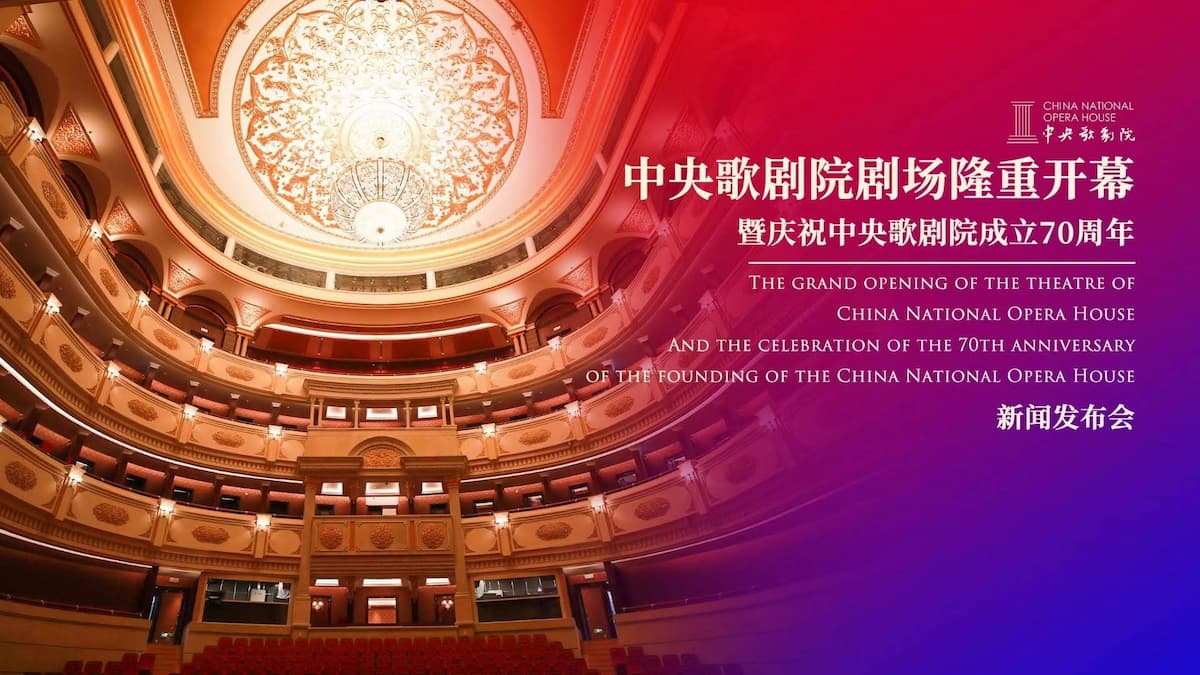 The China National Opera (CNO), one of China’s oldest and biggest opera companies based in Beijing, opened its theatre on July 6th with a gala. Located on the second ring road in eastern downtown Beijing, the about 1,100-seat hall (variable depending on configuration) had been planned in 1942 when CNO was founded but it took 70 years to see its completion due to funding and political complexities. The opening gala featured Chinese classics as well as Western opera highlights, with the CNO Orchestra in the pit conducted by YANG Yang, CNO’s music director, sung by CNO ensemble and soloists. The new theatre is said to house the largest orchestra pit in China. The 150 square meters pit is designed to comfortably accommodate an orchestra of 120 members performing Wagner‘s operas. Before this CNO had to perform at multiple theatres in Beijing, including the NCPA.

YIN Chengzong, Mao’s favourite pianist, is back on stage at 81 in Xiamen

Yin Chengzong, a living legend, and Chairman Mao’s favourite pianist is back. He played the Yellow River piano concert on July 1st in Xiamen to an exclaiming audience roaring his name as if he were a rock star. One of the four composers who adapted the Yellow River Cantata by Xian Xinghai into the classic piano concerto, he has played his own piece in front of the keyboard with legends like Eugene Ormandy/Philadelphia Orchestra in the 1970s and Claudio Abbado/Vienna Philharmonic in 1967. And he had the guts to move an upright to the Tiananmen Square during the Cultural Revolution to play lieder based on poems by Chairman Mao for thousands of spectators in a spontaneous and public bid to save the piano which was otherwise meant to be smashed. He had been received by MAO several times and once changed his name to salute MAO.
At 81, Yin decided to move back to China from New York City where he had lived for the past 40 years. He performed his own piece at his birthplace, Xiamen, for the first time with Zheng Xiaoying conducting the Xiamen Opera and Dance Company Orchestra. It’s like listening to Gershwin in the Rhapsody in Blue.

LI Xincao, who had been appointed President of the China National Symphony Orchestra (CNSO) in August 2021, was appointed Rector of the China Conservatory of Music in November, thus creating a power vacuum at CNSO again. His predecessor ZHANG Yi left the helm at CNSO in April 2019, leaving the vulnerable national institute in shambles. LI’s appointment to take over the CNSO after over two year’s lack of leadership was widely believed as a sign to stabilize the orchestra. Now with him gone, CNSO faces another power vacuum in a matter of three years. 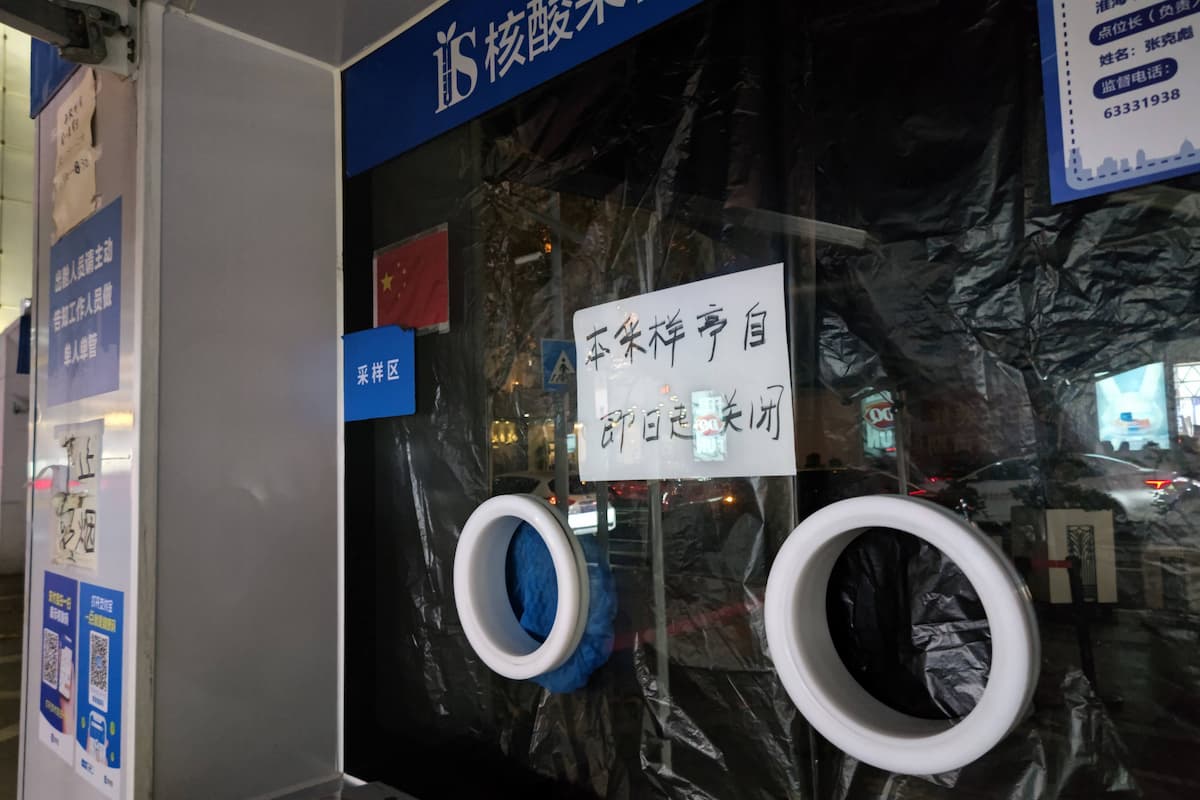 China has taken a rollercoaster approach to its zero-Covid measures towards the end of the year. It tightened restrictions at the end of October, then loosened them all of a sudden at the beginning of December, removing health code scanners installed in public spaces, discharging weekly footprint indicators, and discouraging people from taking PCR tests unless necessary. These created a lot of confusion, also a surge of concerts when the theatre’s full capacity was restored. For example, four concerts were taking place on December 10th in Shanghai, something quite remarkable since the lockdown began in March: Long Yu conducting the Shanghai Symphony in Brahms at Shanghai Symphony Hall, MO Mo’s cello recital at Shanghai Oriental Arts Centre, Chinese ancient legend concert at Shangyin Opera House performed by Shanghai Philharmonic under the baton of ZHANG Liang, a chamber music gala including candle light dinner at ElephantGo.

Violinist jumped to his death amid Shanghai Covid lockdown 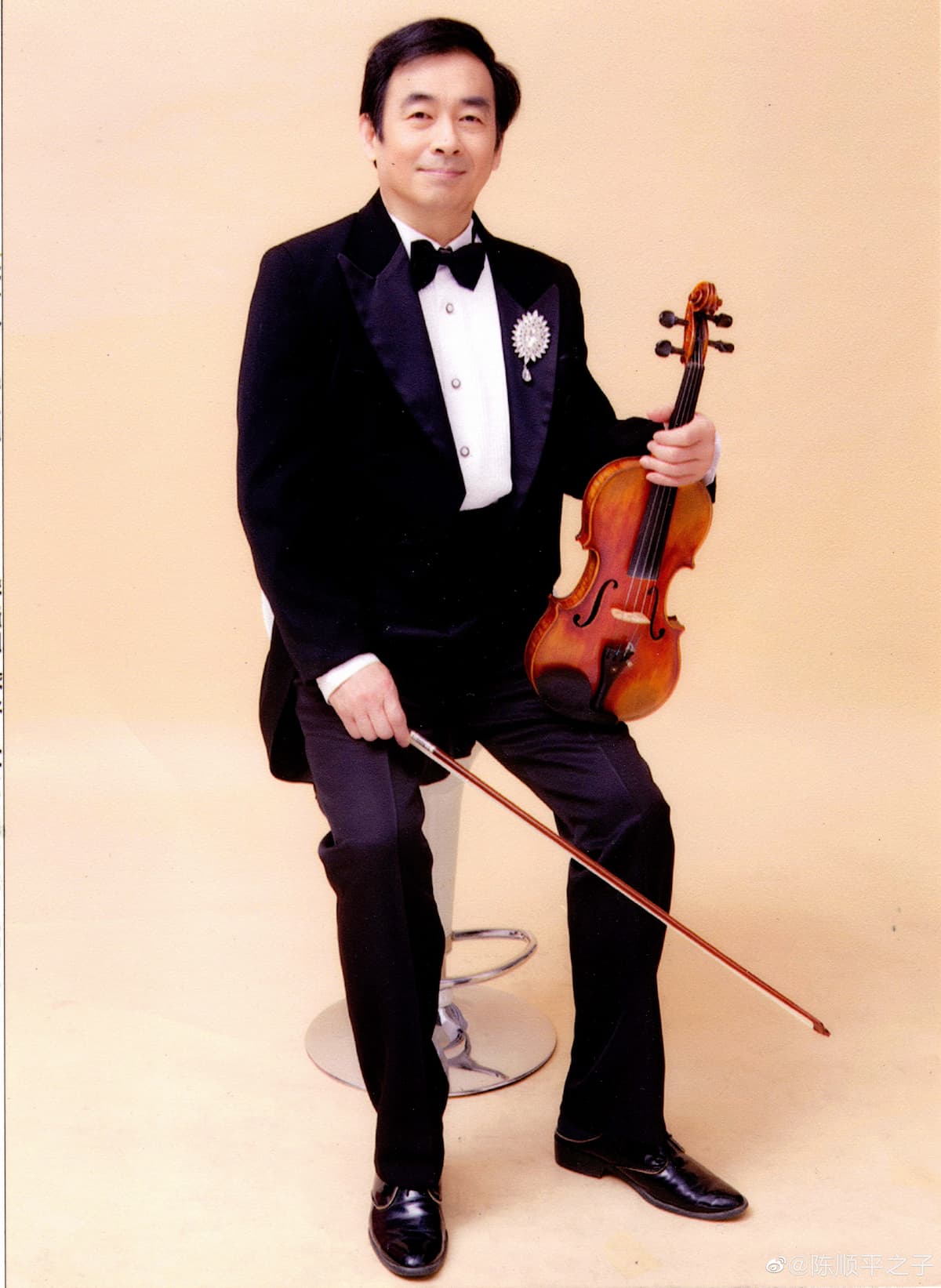 CHEN Shunping, a violinist of the Shanghai Pops Orchestra based in Shanghai, jumped to his death from his apartment on April 14th, 2022. He was 71 years old. The news was confirmed by his family on Chinese social media. His death came as Shanghai entered the third week of city-wide lockdown due to an outbreak of Covid infections which led to about 20,000 new cases every day since the beginning of April. According to his family’s account, CHEN suffered from a sudden stomach ache on the evening of 13th. His wife and he were granted special permission to leave the residential compound to seek medical assistance. However, neither of the two hospitals they were taken to by ambulance was able to take them in due to either Covid restrictions or closure. Frustrated, they were taken back home. CHEN’s stomach aches deteriorated and he couldn’t stand it anymore. In the morning, as CHEN’s wife fell asleep after a sleepless night trying to relieve her husband, CHEN left two notices carrying his last words and jumped out of the window to his death.

One of the two notices says “I have to bid farewell to my family. I couldn’t stand the pain caused by pancreatitis.” The second notice says “I suddenly fell ill last night and was rushed to hospital by an ambulance. Several hospitals wouldn’t take me in. Back home, I took the full force of the symptom which I assume is caused by pancreatitis. I couldn’t sleep last night. I suppose this is it. Here is my last will.”