Composers Inspiration
I Am the Very Model: Gilbert and Sullivan and Light Opera I
by Maureen Buja January 16th, 2018 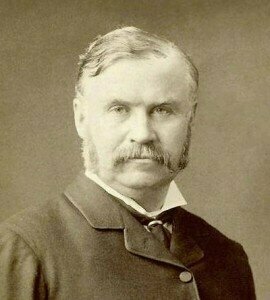 It’s of some tribute to librettist W.S. Gilbert (1836-1911) and composer Arthur Sullivan (1842-1900) that 140 years after their first comic operas hit the stage, we can still find a great deal of humour in their works and many of their works on contemporary stages.

Gilbert, a writer of humorous verse, stories and plays, met Sullivan, a young composer, and they started working together in 1871. Their first comic opera was Thespis, a mixture of political satire and French grand opera stylings. It had a great run on stage but the score was never published and is now lost.

Their next co-production was Trial by Jury (1875), a spoof on a breach of promise marriage suit. This was the first opera in which they established a character and style that would appear in all their operas: the minor character (baritone) who sang a song with impossibly fast lyrics (the ‘patter’ song). In Trial by Jury, it’s the judge’s song ‘When I, good friends…’. 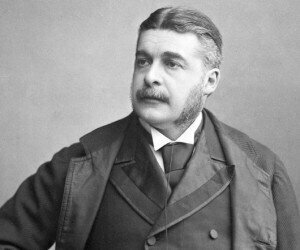 Trial by Jury was a success and there was much demand for the two to collaborate again, but time and money didn’t come together. Separately, each was still active in their own specialities. Sullivan had been a student at the Royal Academy of Music, where he was a student of John Goss, who had been a student of Thomas Attwood, who had been a student of Mozart’s. He was known as a vocal composer and sang with the Chapel Royal. The RAM granted him a scholarship that permitted study at the Leipzig Conservatory where he studied with the greatest teachers in composition, music theory and piano of his day. His one year of study stretched to three and Sullivan always regarded those years as the most important to his own career.

Gilbert, who had an established reputation for his humorous poems, was also known for his parodies of popular works of the day – his Dulcamara, or the Little Duck and the Great Quack was a parody of Donizetti’s L’elisir d’amore. Robert the Devil was a parody of Meyerbeer’s Robert le diable, and so on. After he was an established playwright, he also became a director. Theatre, by the mid-to-late 19th century was a debased art with a bad reputation. As a director, he ran disciplined rehearsals so that he could create a unified world in his productions: everything for a natural and clear performance. This discipline and clarity were the backbone of G&S comic operas. He also replaced the star system with that of a unified ensemble – as could be seen in the selection from Penzanze above. 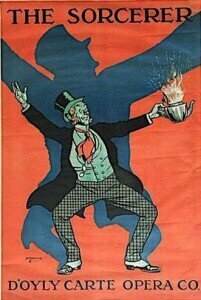 It was their next work, however, that put them on the international stage. H.M.S. Pinafore (1878) poked fun at the Royal Navy, unqualified office holders and social status, with that G&S specialty, the surprise twist at the end. This work also established their character norms: the hero (tenor) and his love-interest (soprano); the older woman with a secret or a sharp tongue (contralto); the baffled lyric baritone, usually the girl’s father; and a classic villain (bass-baritone). These would have been familiar to many audiences from French and Italian opera. Here, the dockside vendor Little Buttercup (contralto) greets the sailors and promotes her wares.

Sullivan: H.M.S. Pinafore: Act I: Recitative: Hail Men-o’-war’s men; song: I’m Called Little Buttercup (Hilary Summers, Buttercup; Scottish Opera Orchestra; Richard Egarr, cond.)
The money that the producer, Richard D’Oyly Carte, made from Pinafore meant that he could split with his partners and, together with G&S, create the D’Oyley Carte Opera Company, which became the established company for all G&S operas onward.