Composers Inspiration
I Am the Very Model: Gilbert and Sullivan and Light Opera II
by Maureen Buja January 23rd, 2018 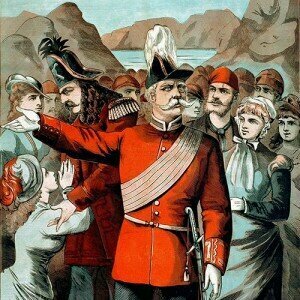 The Major General and his daughters, from The Pirates of Penzance (1880)

Gilbert and Sullivan’s next opera made its surprising debut in New York, rather than London, in an attempt to secure American copyright, which at that time was rather a pirate industry of itself. The Pirates of Penzance opened on New Year’s Ever 1879 and took aim at their usual subjects: civilization, modern education, and unqualified officeholders (The Major General who knows much about everything except things military).

And this kind of piece is key to G&S’s popularity – catchy melodies and ludicrous plots, but all with a perfectly straight face.

Pirates was a hit – both in the US and the UK – and became one of the most frequently performed, translated, and parodied G&S works, such as this version by the Animaniacs. 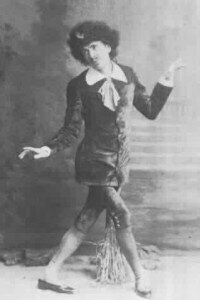 George Grossmith as Bunthorne in Patience, 1881

Their next work Patience (1881) took on the modern Aesthetic movement in the persons of rival poets Reginald Bunthorne (‘A Fleshy Poet’) and Archibald Grosvenor (‘An Idyllic Poet’). Bunthorne’s first appearance combined the poet Algernon Charles Swinburne’s velvet jacket, the painter James McNeill Whistler’s hairstyle and monocle, and knee-breeches like those worn by Oscar Wilde.

These kinds of social commentary required that the audience be able to recognize what was being parodied, and so we understand that G&S were playing to an audience that not only knew what was going on socially but that could also stand back and take a humorous perspective on it.

The new D’Oyley Carte Company opened at the Savoy Theatre with Iolanthe (1882), poking fun at English law, the battle between the sexes, and The House of Lords. 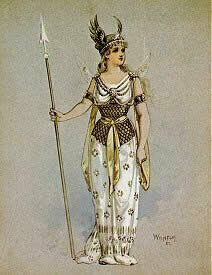 Costume design for the Fairy Queen by Wilhelm

During the run of the opera, Sullivan was knighted by Queen Victoria and many believed that this might be the end of Sullivan and comic opera, as a ‘musical knight’ shouldn’t be working in such a low genre. It seems that Sullivan might also have taken this opinion, as he regarded Gilbert’s work as unimportant and he resented having to simplify his music so that the texts could be understood. However, he had signed a 5-year contract to continue working with Gilbert before his knighthood was awarded.

Princess Ida (1884) was not a success – Gilbert wrote only blank verse for the work and was reusing material from an earlier work he’d done 14 years earlier called The Princess. 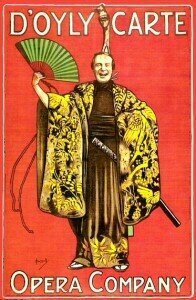 Just as much as the Japanese had affected the French composers, Japanese matters had affected English society. The opening of Japan bought Japanese goods, art, and styles to London and so G&S wrote The Mikado (1885). The exotic setting permitted G&S to satirize British politics and institutions. Many songs and names from The Mikado have entered common knowledge, from the pentatonic melody in the Overture, to the hero Nanki-Poo’s declaration that he’s only a wandering minstrel, the twittering of the ‘Three Little Maids from School’ to names such as Yum-Yum, Pish-Tush, and the Pooh-Bah.

Despite its international popularity, The Mikado was a victim of ‘the chrysanthemum taboo,’ since the title was that of the emperor. The first public production in Japan, sung in Japanese, was held in 2001, nearly 120 years late, in the town of Chichibu, thought to be inspiration for G&S’s town of Titipu.