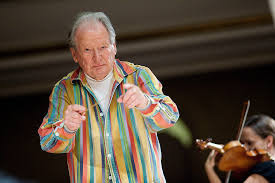 The soundtrack to the 1984 hit film “Amadeus” sold more than 6.5 million copies, reached No. 1 on the Billboard classical albums chart and won a Grammy! Recorded by Sir Neville Marriner and his acclaimed chamber orchestra St. Martin in the Fields, it became one of the best-selling classical albums of all time! Its success was not really a surprise, as Marriner had comfortably established a centrist position on the enormous spectrum of the early-music movement. Disenchanted with the massive and mushy sound produced by the major orchestras, he advocated smaller and more agile groups of instrumentalists for the performance of early music. Yet, he remained committed to playing Mozart, Bach and Handel on modern instruments, even when vocal purists forcefully advocated a return to period instruments and styles. In all, Marriner made more than 600 recordings of 2,000 musical works, a legacy that remains virtually unrivaled. Joshua Bell, who succeeded Marriner as music director of the Academy in 2011, remembered him in a statement for “his brilliance, his integrity and his humor, both on and off the concert platform,” and said he would “always be the heart and soul of the Academy of St. Martin in the Fields.”

Neville Marriner studied violin compositions and piano at the Royal College of Music and the Paris Conservatoire. He soon was appointed principal second violin with the London Symphony Orchestra, a position he held from 1956 to 1968. During that time, he established the Academy of St. Martin in the Fields, which gave its first public performance in 1959 in the London church from which it took its name. Marriner explained that becoming a conductor had allowed him to overcome his own shortcomings as a violinist, which he likened to being “like an actor with a speech impediment.” Being a conductor, he explained, “allowed me to harness the talents of an entire orchestra.” The managing director of the newly founded L’Oiseau Lyre record label attended the first concert and signed them up on the spot. What followed was a long line of recordings covering “ice-cream composers,” such as Corelli, Torelli, and Albicastro. In addition, the Academy’s fresh, technically brilliant interpretations of Vivaldi, Mozart and Haydn won enthusiastic reviews and invitations from around the world. Essentially, Marriner and the Academy revived the chamber ensemble “as a viable alternative to the big symphony orchestras, and forced orchestras everywhere to improve their act.” 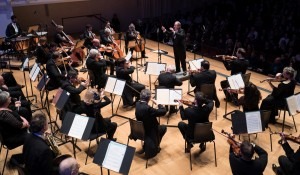 Marriner and the Academy transformed the classical music scene. And they did so entirely without subsidies or Arts Council grants. Salaried orchestras, according to Marriner have a dreadful “unionized attitude, they severely distort the market, and if the British Arts Council give you money, they also tell you how to spend it.” Instead, he treated the players as family. Although selected for musicianship, the most important test was one of character. “If they are miserable devils, they don’t get invited back.” Technically polished and musicologically sound, Academy recordings offer convincing interpretation of exquisitely shaped music. Marriner eventually expanded the repertoire to include Beethoven, Schubert, Schumann and British composers Britten and Elgar. He also founded the Los Angeles Chamber Orchestra, and served as music director of the Minnesota Orchestra and the Southwest German Radio Orchestra in Stuttgart. For his service to music in Britain he was made a Commander of the British Empire in 1979, and knighted in 1985. Queen Elizabeth II recognized his achievements in the arts, science, politics, industry and religion in 2015, and made Sir Marriner a “Companion of Honor.” Music Director of the Academy of St. Martin in the Fields from 1958 to 2011, and Life President thereafter, England’s most prolific conductor Sir Neville Marriner passed away peacefully on 2 October 2016.